Behind the mask, Rebecca Owens vs Haley Cote

Behind the mask, Rebecca Owens vs Haley Cote

Although the pay per view had been a bust, at least one good thing had come out of it. Rebecca was in the locker room making sure that her dancer costume was settled onto her body in a way that was both comfortable and did not interfere with her movement. She needn't have bothered though, the fabric was designed to do that. While she did she did a little wiggle of anticipation. She had lucked out and had her challenge accepted by one if the elites here at AFW, Silver Ace. Although not Ace, as the marked woman was using her actual name and removing the mask. On top of all of this this was to be her opponent's debut into the hentai side of things and the fact that she, a relative newcomer, had been chosen was an honor she did not take likely.

Rebecca did one final check before walking out and heading to the ring, just in time to hear not the song of Rolland which was her normal entrance, but a remixed version if several public domain Arabic sounding tunes thst she had been practicing to for weeks now. She danced out onto the stage, showing the results of her practice, the audience going wild as she danced and shook her hips all the way to the ring where she gave a final performance before settling into her corner to await Haley 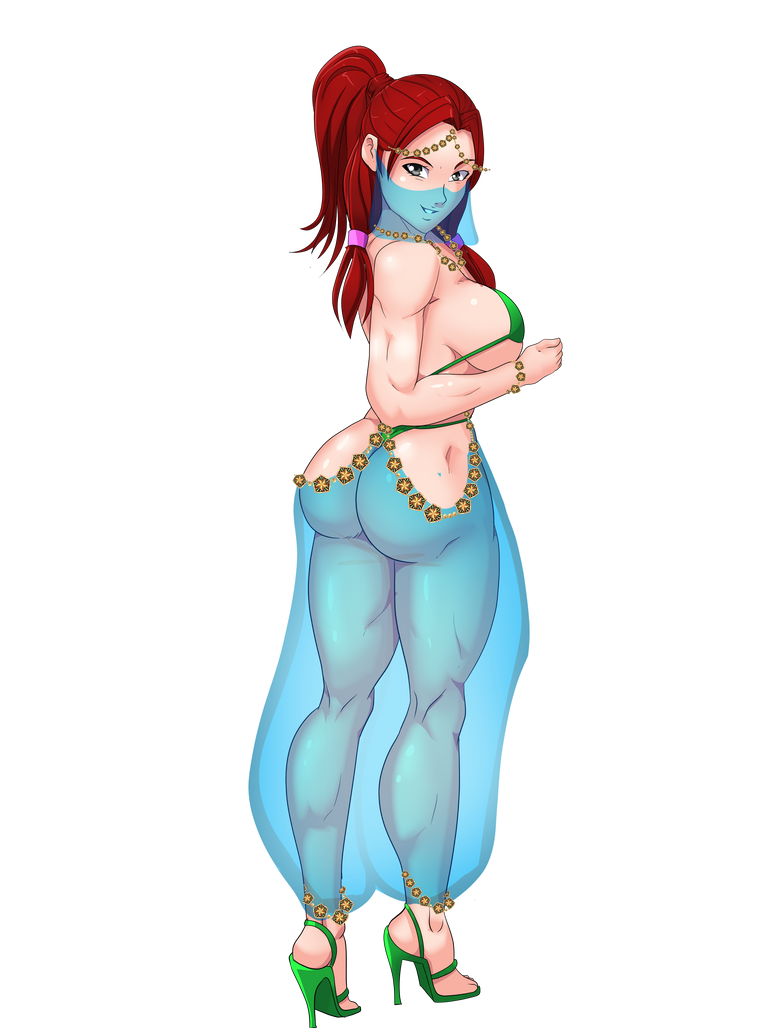 Her music began to play, and she made one last adjustment of her outfit before coming out to the ring. 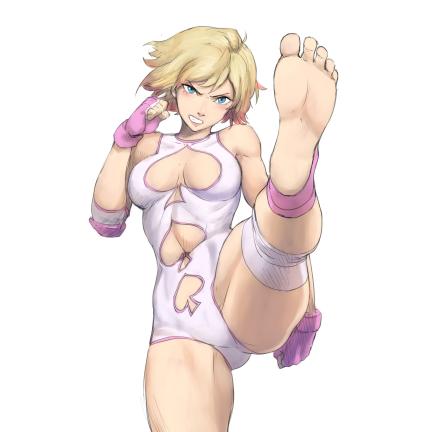 Dressed in a very tight and skimpy singlet with pieces cut out in the shape of spades, barefoot, with pink gloves and ankle wraps, (the pink and white color combo in tribute to her lover Valley Doll's colors, just as Ace now dyed the bottom of her naturally blonde hair pink like Valley did) Haley came out onto the ramp to a loud roar of approval, blushing as fans catcalled and applauded for the Canadian fighter.

Upon entering the ring, she whistled and looked Rebecca up and down in her incredible dancer attire, surprised at how risque she went with it. "Wow...you uh, you look pretty great Rebecca. You like my outfit? I'm the Ace of Spades. Good pun, eh?"
_________________
Check out the recently revamped Roster Page, now with pics!

Rebecca burst out laughing at the joke, her emotions high right now due to the significance of this match. "It makes you look quite stunning, because it hugs your beautiful curves well." Once more she began to dance, showing off her own curves to the veteran. "It is again an honor to face you, just don't expect me to let you win. After all if I win here, it will be a major accomplishment and proof of my Warrior's path." It felt a little silly saying that with a dancer's outfit on, but such was Rebecca.

She moved to her corner, kicking off the shoes and opting to fight barefoot, like Haley. She continued to bounce and stretch until the bell rang. At that point she moved to the center, offering up a contest if strength to Haley.
_________________
Valicon's Roster

Ace's smile beamed proudly, glad to hear she looked hot. This outfit had been Valley Dolls idea after all, and she was very proud that her lover knew what made Haley look good. Though her opponent had picked a great outfit too.

Excited and nervous, Haley accepted the test of strength, locking fingers with her opponent and pushing against her! "So..." she grunted in the TOS, still looking to taunt her opponent. "What do you like having done to you eh?"
_________________
Check out the recently revamped Roster Page, now with pics!

Rebecca accepted the lock up, pushing against Haley in an attempt to determine who was stronger. It was close but Rebecca thought she had the edge there. "Oh, trying to get the lowdown huh? Well I don't mind saying I like it rough. However that also means I know how to give it rough as well" she said, grinning from ear to ear.

As they continued to push, Rebecca would try to back her opponent into the corner before getting started on the lewd stuff, a simple touch to her opponent's breasts, just to see how Haley reacted.
_________________
Valicon's Roster

Haley grunted as she locked up with her sexy red-headed opponent, pushing hard against her, and finding that Rebecca was, in fact, stronger than her. She held her own for a bit, to her own credit, but was soon being pushed back by the woman in dancer garb, until she was pressed back into the corner.

Seeing her opponent's reaction, most other fighters would have pressed that advantage, moving on to much lewder things. Not Rebecca though, she remembered her own first time vividly enough, the crowd cheering as a certain silver haired man just took her appart. It was a shame that she still was haunted by and so she took her hand down backing up to let Haley recover for a moment. Still she was not stupid and in the meantime prepped a spear for the moment the veteran recovered
_________________
Valicon's Roster

While the grope to her tits was a shock at first, Haley quickly shook it off. This was what she wanted, this was what came with it. Get used to it or get out of the damn ring, and Haley had zero intention of doing that, quickly shaking her head as Rebecca backed off and getting back into the game mentally.

As soon as she did though, she got nailed in the stomach by a charging Rebecca, spearing Haley down to the canvas!
_________________
Check out the recently revamped Roster Page, now with pics!

That moment of distraction had provided all the opening Rebecca had needed to launch her scantily card form like a rocket into Haley's midsection, landing them both onto the mat with a solid thud. Rebecca though had landed on top and looking diwn at Haley, she grinned and moved her hands above her head. "Better get ready because this is where things get fun." Her costume was in fact a fully functioning dancer's outfit (a fact Shad had found out to his immense pleasure several nights ago). And now from her position she began to dance on top of Haley, shaking her hips and moving her bust like a pro (she had spent weeks learning from internet videos how to do it.)hoping to mesmerize Haley as she slowly moved to for a kiss
_________________
Valicon's Roster

Haley was a fighter at heart, and thus, was used to being in a position where she was on the mat, with another fighter on top of her, and quickly got her arms up, the blonde woman expecting a punch or elbow to come her way.

What she was not expecting, was for Rebecca to sit up on Haley's lap...and start belly dancing, swaying her body around, grinding her crotch into Haley's lap, her bust jiggling around. Haley had been with Valley Doll for years now, and while the Californian woman was the love her life and the most beautiful woman she had ever seen, she would be an idiot to not admit that Rebecca was an absolutely stunning woman, and in that outfit...she looked quite amazing.

Not experienced with this type of situation, Haley froze up, leaving her perfectly defenseless as Rebecca leaned down and began kissing her!
_________________
Check out the recently revamped Roster Page, now with pics!