Mindy Jang vs Ebisu - Crazy for You

Mindy Jang vs Ebisu - Crazy for You

The stage curtains were held slightly aloft by Mindy's prying fingers, creating a narrow slit wide enough for one of her gleaming pink eyes to peak through. Her vision darted across the arena, jumping from the brightly lit rampway to the sizeable crowd before finally resting on the ring at the center of it all. A giddy snort escapes from her lips, quickly hushed by two of her fingers as they went to cover her mouth. The excitement was just too much to contain. If she was forced to wait even a minute longer she was sure she'd break down into a skittish mess.

Her other hand tapped frantically on the pink leather grip of her baseball bat which sat comfortably over her shoulder; fingers practically begging her to use the sizeable object as more than just an entrance prop. Unfortunately for her, Mindy was going to have to show some restraint in her debut match, although quite a few concessions had been made so that she wouldn't be totally obstructed from bashing her opponents brains in.

For one, there was the litany of tables, ladders and chairs free to use in the match, haphazardly spread out across and underneath the ring apron. That on it's own would be enough to satisfy the sadistic cravings of most wrestlers, but with Mindy, the word "enough" wasn't anywhere to be found in her lexicon. Then there was her opponent, someone who Mindy hadn't bothered to do even the slightest amount of research on. Why bother? She'd only end up spoiling the fun of discovering, deciphering, and dismantling the dumb bimbo all in that one first glance.

Her black and pink boots rasped the concrete floor irately, itching the rest of her body to spring into action already. 'That bitch better be able to dish it out just as well as she can take it!' she thought to herself with a snarl. Nobody loved a good beatdown more than Mindy, but she didn't come all this way to the big leagues just to massacre some poor helpless girls (although that would be a plus). There was plenty of that right at home. Oh no, she came here for a challenge, and those who didn't provide her with one were going to pay dearly.

Finally, as if sensing the pinkette's patience nearing it's limit, her entrance music played through the arena speakers for all to hear. A nearby stagehand gave her hastened wave of his hand, signaling her cue to grace the spotlight for the very first time. 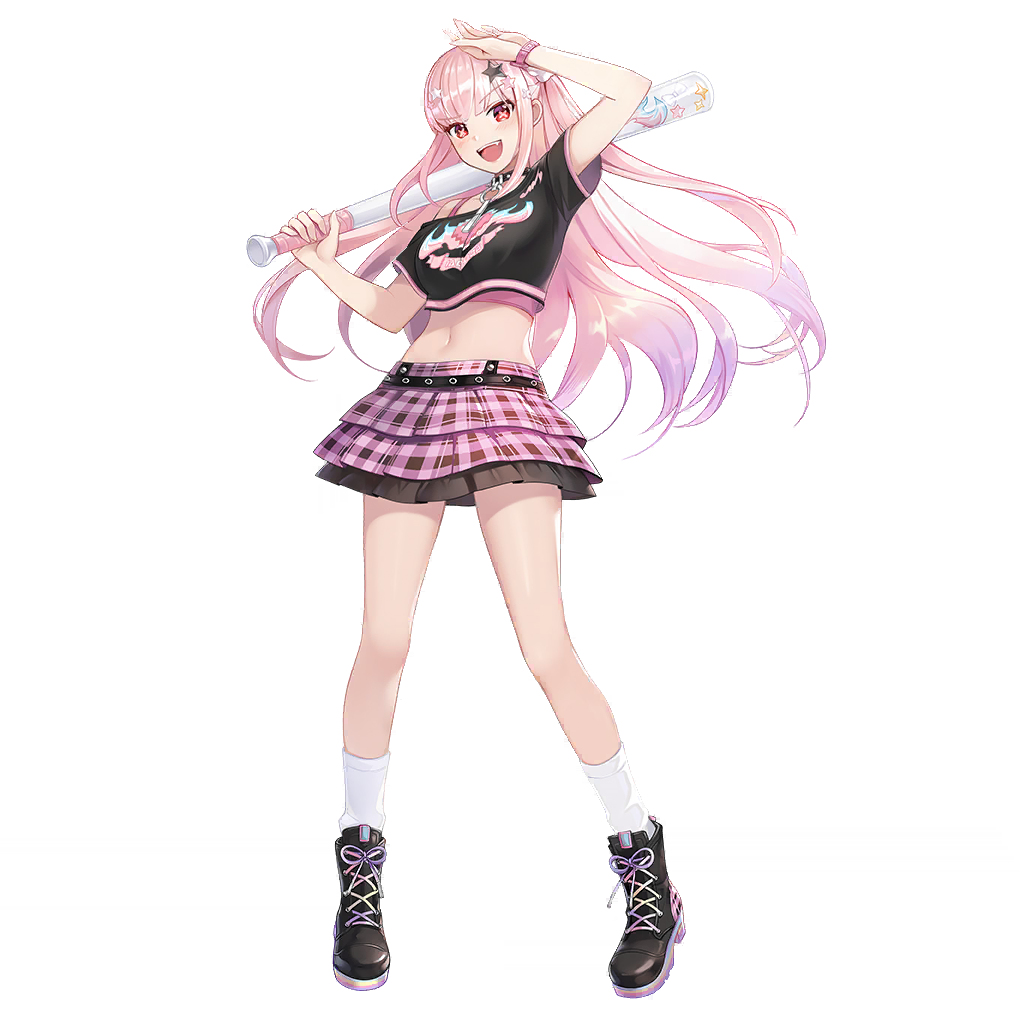 With a wry smile warped onto her face, she burst through the entrance curtain, baseball bat hung horizontally across her shoulders with her arms draped over top. She skipped her way down the ramp, the arena spotlights shimmering frightenedly against the backdrop of her psychotic pink eyes. She stopped just short of the ring steps, instead spinning around on one heel to face an audience member who stood nervously near the grates. "Hold on to this for me, will ya? I'll be coming back for it later" Mindy said with a wink, shoving the bat into the arms of the young man who was clearly put of by the unhinged girl's salacious charm. The rest of the crowd reacted as they would when introducing any other debutant, with loud welcoming cheers and hollers. Their naivety almost made Mindy chuckle. Debuting in a TLC match was special enough on it's own, but when Mindy was involved, anything was possible.

She skipped up the ring steps and slipped between the ropes, her loose crop top swaying just enough to flash the nearby spectators underneath. She stuck out her tongue and thrusted her middle finger out to the rowdy men brave enough to hoot and whistle, while still making it perfectly clear that she enjoyed the attention. She skipped around the ring, her index finger and pinky shaped in the sign of the horn as she bobbed her head violently to the clash of her heavy metal entrance theme as it still played overhead.

With one last flawless wave of her flowing pink hair, Mind made her way to the opposite corner, leaning her back against the turnbuckle with her arms draped over the top rope. Her menacing eyes stared out into the entrance ramp, daring her opponent  to walk through those curtains and step foot into the ring with Mindy Merciless herself.

This would definitely be a match for the books. A TLC match, often known for being brutal affairs that pushed both wrestlers to their limits as they bashed and slammed each other into and even through tables, chairs, and ladders. A match encouraging the use of unconventional weapons and outright brutalizing your opponent. A match that a more sadistic or savage wrestler would through themselves into fully. And while Ebisu wasn't a sadist, she was definitely willing to prove she earned her title as a savage.

And what a match this would be. Not only debuting a new wrestler, but debuting a wrestler that was actually banned from another league. Ebisu didn't know the full story since it took place outside of Japan, but apparently the wrestler in question went by Merciless Mindy, an apparently savage fighter in her own right that was picked up by AFW to let her run rampant over the company. And a person like that would likely need to be tamed in their debut. And what better way to tame a savage than by facing another savage in one of the more brutal match types in the company.

Still, this was no joke. A TLC match was always a rough one. And while Ebisu excelled in it, given her opponent who could say how things would go? 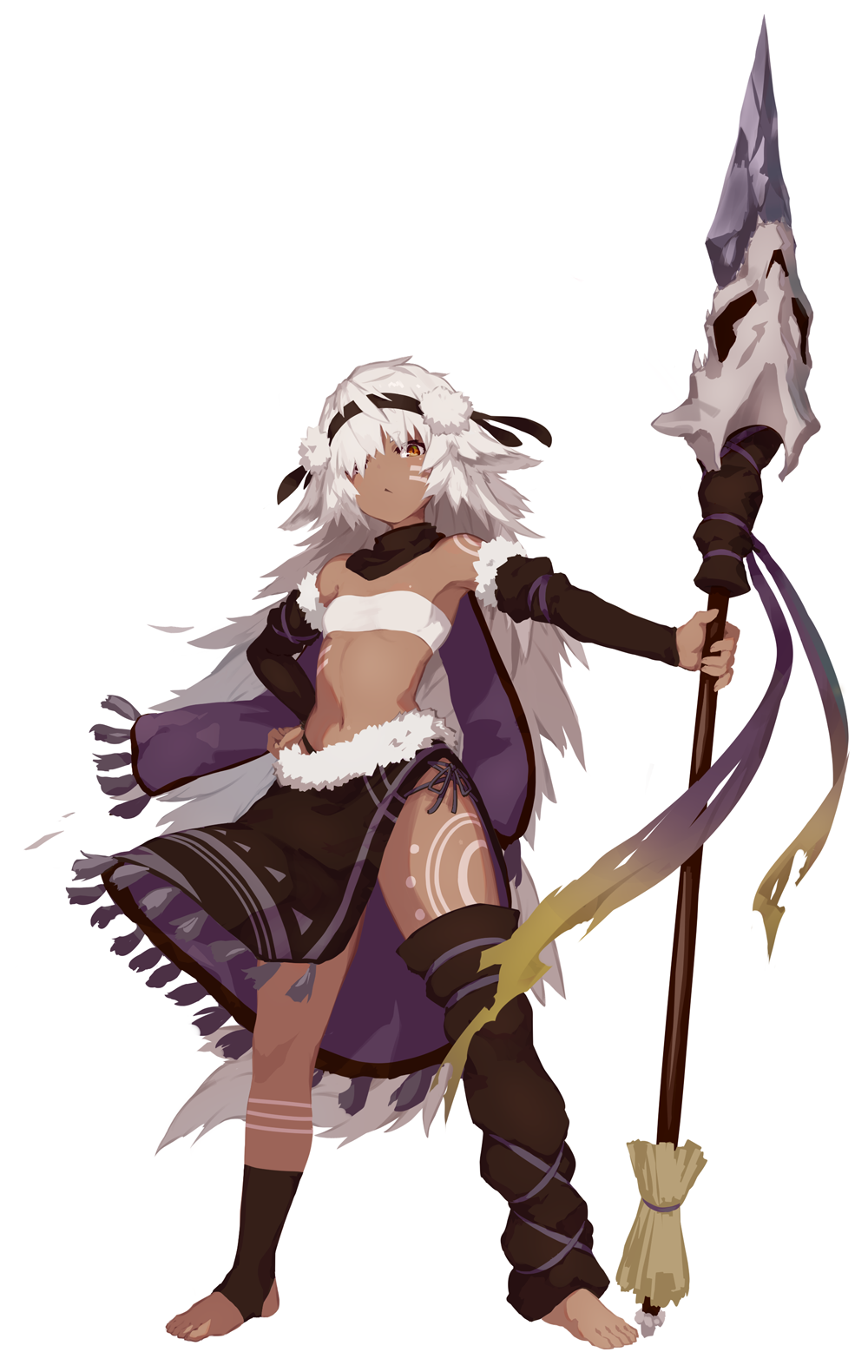 And as the rumbling beat of her theme kicked in she merely took a breath before walking out onto the stage. And the moment she showed herself in all her tribal-esque garb the crowd ring out in cheers. No doubt they were excited to see savage take on savage in one of the more brutal matches to date. And she wouldn't let this crowd down. She moved to the ring with careful and collected steps, eyeing the woman to be her opponent.

And... she was quite the sight.

Pink hair, pink eyes, and a look of pure sadistic intimidation as the Barbarian made her way down to the ring. She hopped right over the ropes, touching down with surprising grace and deft. And once in the ring, she dropped the thick cape and skirt she was wearing, revealing the lacy brown hotpants underneath that just barely hide the essentials, an act that got a pop from the crowd as her body left little to the imagination and showed the lean muscles years of training had given her. And now battle ready, she moved to her own corner, meeting Mindy in the eyes with stoic sharpness.

Mindy perched herself up on her tiptoes, craning her neck to catch a glimpse of her opponent's entrance from afar. A lethal smile burst onto her face as the girl finally presented herself, striding down the ramp and towards the ring with a solemn glare. She hungrily licked her lips as the fellow savage disrobed, making way for the more revealing attire underneath.

It was a pity she was going to have to destroy such a fit and beautiful body, but it wasn't like anybody could stop her if she decided to have her fun first. She shot a quick glance at the referee, scowling as she realized that this match wouldn't be totally limitless. "Rules... Fuck rules!" Mindy murmured under her breath with a shake of her head.

After all, here was a girl who supposedly posed herself as a fellow savage, although with a much more literal take on the term. Despite adorning a getup that made it look like she had just emerged from a cave, the toned warrior was exceptionally calm. Cruel thoughts and raging questions began racing through Mindy's head. For a girl who goes dresses up as a 'barbarian,' she did seem rather... reserved.

Did this girl really live up to the name, or was it just a gimmick? What would it take to unleash the beast within, and then utterly crush it? Mindy's eyes raced from top to bottom, processing every square inch of the fighter she was about to dismantle. She was a few inches taller, with a well built frame that hinted towards years of training and experience. At glance it was pretty clear who had the strength and power advantage, something Mindy immediately took note of. Not that it bothered her of course. What she lacked in size she made up for in a variety of other, creative ways.

Their staring contest ensued for what seemed like an eternity, until finally broken up with a wave of the ref that signaled the that it was time for the two to meet in the center of the ring. She cracked her knuckles and rolled her neck around her shoulders as she slowly approached, her sadistic smile returning as she stood inches away from her opponent. "Pull out while you still can cavegirl, otherwise Mindy Merciless is gonna send ya back to the ice-age, ya hear!?" Mindy said with a snarl, getting right in the face of her barbarian clad opponent.
_________________
Friction
Mindy "Merciless" Jang