The slender little Welshboy would proudly sit upon his serpentine opponent's chest with a playfully cheeky grin plastered across his adorable face. "Bet ya didn't see that one coming! Ya daft Snake~" He teased playfully before pressing the advantage he had given himself with that glorious reversal.... How?

By immediately delivering a sharp sucker punch to Cobra's face, and then another one, and another one, and then yet another one. Four hard punches into the Snake's mug, now on one hand Jasper didn't have anything really against this Cobra guy, but on the other hand, and he did feel kind of sorry for Cobra what with wailing on the guy's face, But he just had to admit that It felt a little cathartic in beating his face into supposed submission... But that wasn't the end of it. No, the little feline had a bigger idea in his mind on how to make this serpent scream...

Rising to his bare feet, off of the snake's chest, the little feline scurried to the nearest turnbuckle and began climbing up quickly, stopping at the top rope before blowing the audience a kiss, Then somersaulted backwards for an Airborne Victory Bomb!

*Still momentarily baffled by this sudden momentum shift, Cobra was swiftly and viciously assaulted by the overzealous feline, haplessly elevating his flailing arms to create some semblance of a defensive stronghold. Unfortunately, this provided him with little respite as the incoming blows coaxed out a maelstrom of stifled gagging and raspy exhaling, before finally resulting in Cobra collapsing across the arena!*

"Hhmm...huh...???" *Catching a fleeting glimpse of his foe's impending maneuver in motion, the crafty Cobra concocted a brilliant means to reverse this unsavory reality of his. Carefully tucking his knees together, he subsequently elevated his legs as a makeshift speed bump to derail the frisky kitty's newfound momentum!* "Ssssssstop right there!" *He curtly hissed, refusing to allow himself to get steamrolled before he had a chance to get his feet on the ground!* 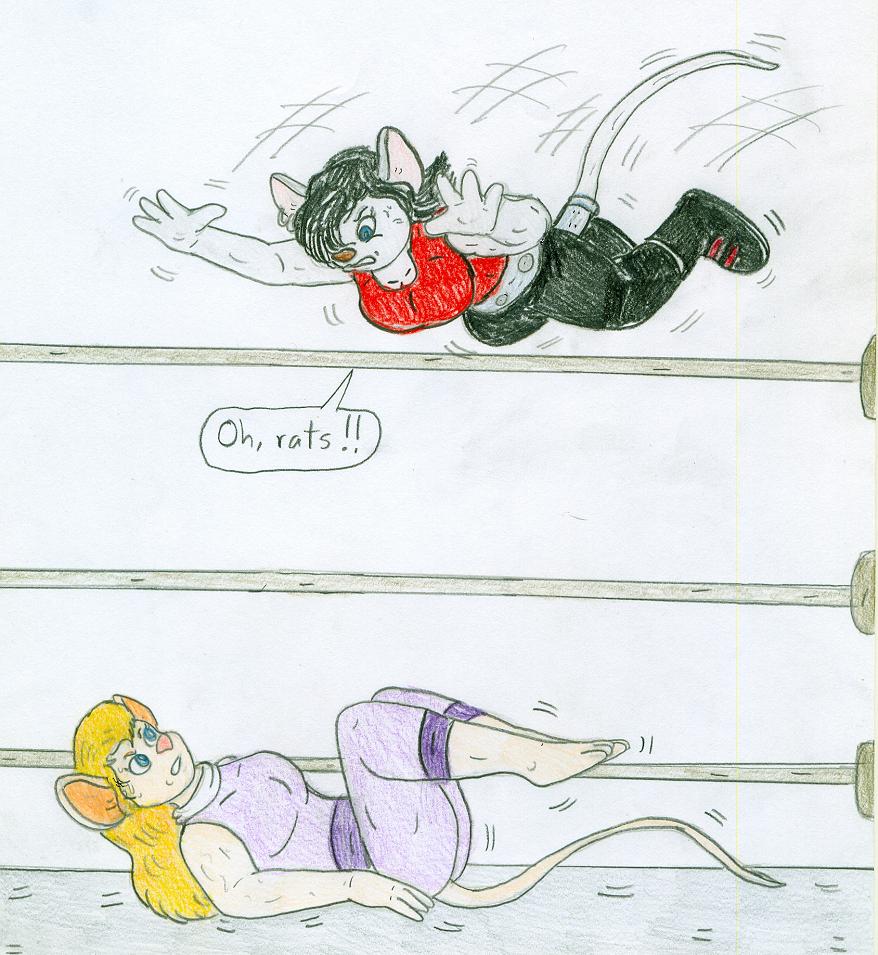 Just when it appeared that Jasper had the serpentine fighter in his sights for a proper, devastating blow. Cobra masterfully countered the playful feline's airborne attack by merely raising his knees-up so that when the boy made contact with his target, he'd get a nasty surprise!...

And much to poor Jasper's chagrin, It really was a nasty surprise as he watched the ground (And Cobra's knees) get closer and closer each millisecond as he dashed down from that spectacular somersault. "-OH 'HECK!" The boy yelled out in the final few seconds before, finally, with a painful crash. The little cat's lungs completely evacuated of all oxygen, with poor Jasper wheezing for breath as for a few seconds he was clumsily forced onto his feet by a sudden upwards movement of the serpent's legs before finally flopping onto his back with a painful thud, breathing deeply for air with his body wracked with sharp pain.

*just as the spry kitten was on the verge of felling his malevolent foe, Cobra suddenly turned the tide of battle into his favor, shifting his legs upward and intercepting Jasper's reckless dive with a tandem knee stopper.* "Gotcha, squirt!" *He nefariously hissed before sliding Jasper's lithe body off of him, the audience prominently expressing their disdain by jeering at the sudden shift in momentum. This, however, was nothing new for the vicious viper- He had a knack for allowing his foe to exert all of their expendable energy early on, then striking when they're incapable of defending themselves.*

"Now, let me show all of thesssssse degeneratesssss how to properly execute an aerial attack!" *Springing onto his feet, Cobra approached the nearest turnbuckle before climbing to the highest portion, looming overtop of the unsuspecting catboy before striking a brilliant pose for his offended audience, launching towards him while extending his elbow downwards to try and smash it across his solar plexus for a wicked elbow drop!*

Pain, Pain... Oh, so much pain... The little bluenette's world was nothing but a swirling world of pain as he was slid off of his opponent and left to curl up into a writhing little ball, pain wracking his whole body from head-to-toe, all Jasper could really do honestly was just breath in deeply and bite his lips to avoid letting out any agonized wails that Cobra could use as an excuse to claim victory over him... and soon enough the agonized little Feline would shift from his little curled up position and attempted to sit himself up...

Without warning, and with the utmost in cruelty. Poor Jasper was so caught up simply recovering from the crash that he didn't really notice his opponent climb the ropes, no if anything he'd somewhat forgotten about the fact he was even facing off against a serpentine brute... So when Cobra crashed down on upon him elbow first, The little feline did what he knew best and rolled to his left, hurriedly avoiding the Serpent's mighty elbow at the last minute!

*As the verdant and emerald blur crashed his extended elbow down against Jasper's ribcage, he was unpleasantly surprised when he landed upon nothing but the harsh surface of the arena, causing him to wail in unimaginable pain!* "Gggnhhsssss!" *He simpered aloud, twisting and writhing in agony while the crowd applauded Jasper's agile efforts to avoid the incoming attack.*

"Nnnhh...that'sssss sssssmarts..." *The agitated snake murmured under his laborious breathing, trying to shake the lingering sting his failed gambit left upon his arm while contemplating what his next move would be comprised of, completely disregarding what his feline opponent is potentially capable of.*

That did it, the big daft Snake had played his hand and it's ended catastrophically for him, the crowd subsequently approving of the little Welsh boy's daring escape. Now standing over his opponent, Jasper took a deep breath and smirked.

"Well aren't you a Silly one?" He said as he stepped back and away from the downed serpent, briefly stretching before darting himself off the ropes, and subsequently rushing the still smarting Cobra for a flying drop-kick, his bare feet soon making contact with the blonde snake's head with the force of an armour piercing shell, the crowd loving every minute of this new offense by the smaller wrestler!

*Still reeling from that unexpected drop against the harsh, unfriendly terrain Cobra heard the subtle footsteps of what he could only determine were of his adversary's, but before he could conjure up enough energy to avoid it, Trent was on the receiving end of a discombobulating pair of feet to his dome!*

"Ggggrrrhsssss!" *A confluence of anguish, ire and confusion rattled out of his gaping maw before he tumbled to the ground, clutching the side of his skull as the audience hollered and cheered at the insufferable snake was finally getting put in his place!*

A Feeling of superiority would come over the feline as he looked down at his serpentine foe reeling in pain, his mind racing through ideas and plans on how to press the advantage he had before finally, an idea came to him... "Yess... that'll do nicely." He thought to himself as he walked over to the stricken Serpent, grabbed his left foot whilst positioning himself to clamp down on Cobra's right-leg with his thighs.

"I saw this on Telly once!" Jasper exclaimed as he began to ratchet the Snake's left-leg back in what could best be described as a rather novicely done Sharpshooter, doing his damnedest to make Cobra suffer, one leg being clamped down between his powerful thighs, the other ratcheted back to try and get a scream of pain from his bigger opponent!
_________________
Snow's Heroes
(Or Razor's Aces.)

*Fluttering his eyes as a means of preserving what little consciousness he still clung to, Cobra heard a delicate voice from across the ring mutter something he couldn't discern, catching a sliver of his attention.* "W...what did you sssssay?" *Attempting to crawl towards the ropes for some leverage, abruptly feeling something snatch his bare foot!*

"W...wait..the hell are you...GGGNRRH!" *Within an instant, he had the answer to his question in the form of an excruciatingly painful leg twist, curling his fingers inwards to try and assuage the unpleasant sensation, coaxing the audience into applauding the valiant efforts of the miniature lynx as Cobra tried to slither towards the ropes for salvation!*