Kozue was a little surprised to see that Kieda was surprised, seemingly shocked that her attack wasn’t enough to put her down for the three count so early. The New Jersey Ninja might’ve looked frail to the outside eye, but match after match after match had proven that she could take a beating and keep going. Hell, her last match had been a near thirty minute whopper against Alaina Fucking Sanders. If she could hold her own with that heavy hitter, than nothing less than Kieda’s biggest guns would do.

She’d be fine. Just needed to catch her breath. No big deal.

Kieda wasn’t keen on giving that to her, though. She was just starting to get up after, getting her bearings, when she looked up to see her opponent flying her way once again, this time heading towards her with those weird boots of her shooting out. In most circumstances, she would’ve been able to dodge, but she was still feeling the effects of those last few attacks. Not enough energy to move. Not yet.

She took it hard in the chest and went into a roll, tumbling further than she needed to. Her path took her under the ropes and to the outside of the ring, where she landed on her feet and stumbled back to the barricade. A tactical, temporary retreat.

*With the tactile reassurance of her feet connecting against Kozue's chest with a resounding* "WHAM" *That sent a reverberating shockwave throughout the arena, ultimately forcing The Fashion Assassin's foe staggering out of the arena. While she would traditionally follow such a turn of events up with a stunning pose or a condescending chortle. However, she knew that time was of the essence, and she noticed her vulnerable prey was an easy target for a subsequent follow up.*

"Mmhh...need to...concentrate..." *After gracefully landing on the edges of her platform boots, Kieda clasped the edge of the ropes to prevent herself from collapsing on the ground, steadying her svelte body before hatching a brilliant plan of attack- if Kozue was going to try and escape her wrath by slipping to the outside, then the only logical conclusion would be to follow her.*

"This is for giving me that condescending sneer earlier!" *Repositioning her hands onto the highest rope as a means of physical support, the acrobatic fashionista proceeded to catapult herself onto the outside, attempting to slam into her competition with a flying crossbody!*

Kozue leaned up against the barricade, heaving hard, trying to catch her breath. This wasn’t the first time she’d been pushed hard in a match, wasn’t the first time she’d had to retreat, but she couldn’t recall the last time it had happened so early on. Kieda was already proving to be the worst kind of opponent for her - fast enough to keep up with, a hard hitter, smart, cunning. All her advantages, little she could exploit.

But it wasn’t a death sentence, it just meant she had to be smart, careful. Think, think, think. And the main thing she was think think thinking about right now was the way the crowd was suddenly getting nice and loud, almost as if-

Sure enough, she looked up and saw Kieda flying her way with open arms, going for a crossbody. At this point, she had three options:

2. Move out of the way. Might not work, she was falling fast, not a whole lot of space left.

That last one appealed to her the most, so she went to it without any real deliberation. As Kieda fell towards her, Kozue leaped it, fell back, and brought both of her knees to her chest, so that Kieda would be coming down on the points of them instead of the soft upper body she’d been aiming for. It would suck for her, too, with her back crashing to the floor under her falling opponent’s weight,but as long as it sucked much more for the ‘Fashion Assassin’, she could live with that.
_________________

*The gauntlet had been thrown down, and Kieda was on the precipice of picking up said gauntlet and viciously smacking the insufferable Kozue with it so hard she'll be seeing stars. As she flung herself out of the arena and onto the crash pad below her, potentially sandwiching her target between herself and the ground, the obsidian silhouette managed to elevate her shins skyward and slam them across Kieda's torso before both collapsed to the ground in tandem!*

"Nnhh..." *Barely clasping onto the weak tether of consciousness that she could, The Turquoise Kunoichi had never anticipated such a swift reversal, nor had she experienced one throughout her almost decade of competitive wrestling; the amount of time necessary to position yourself in just the right spot for a double knee driver would be twice as long for anyone else, but it was obvious Kozue was cut from a different cloth.*

*The audience, meanwhile, was soaking up this marvelous display of wrestling acumen, screaming at the top of their lungs while simultaneously chanting* "Fight forever! Fight forever!" *While both women lie stationary against the padded flooring, Kieda struggling to remain awake from the unfathomable amount of pain she was currently in!*

Oh, the audience wanted Kozue to fight forever, did they? That was nice. Unfortunately, her back wasn’t of the same opinion - if it had its way, it would probably call this a night, and she wasn’t too far off from agreeing.

The New Jersey Ninja was thrashing about on the floor, rolling left and right, hissing as the pain from the impact ran its course through her veins. Her style relied on a certain level of self destruction, but damn, that one was over the line, even by her standards. It would hurt to lie down in bed for weeks.

The sole bright spot was that it clearly hurt Kieda worse than it did her. As she eased back on the floor, Kozue looked over to see her rival laid out, thoroughly wrecked by her counter. It was a good sight to see, and she could’ve stayed like this for a while, being honest.

Except for that, yeah. Crazy as this was getting, it was still a standard match with standard rules, which meant countouts, which meant she didn't have the luxury in taking a siesta on the mats. Gritting her teeth, groaning, she sat up, rolled to the side, and grabbed the ring apron for support as she pulled her way back up to her feet, straining all the way. She stood straight, shook it off, and moved over to her rival.

*As the flickering lights up above matched her unfocused, lackadaisical movements against the frigid ground she was currently sprawled out across, Kieda heard something that sounded like a faint insult from her nemesis, refusing to acknowledge it entirely as the unfathomable amount of anguish kept her relatively motionless. However, her brief respite was rudely interrupted once Kozue decided to retake control of the reins by tugging the turquoise shadow back onto her unsteady, groggy legs!*

"Nnhh...a..after you!" *Attempting to shift the momentum back in her favor, Kieda smacked Kozue's hand away from her body with a blisteringly fast knife edge chop to her breasts, expending a tremendous degree of what little energy she had to keep the match as competitive as possible!* 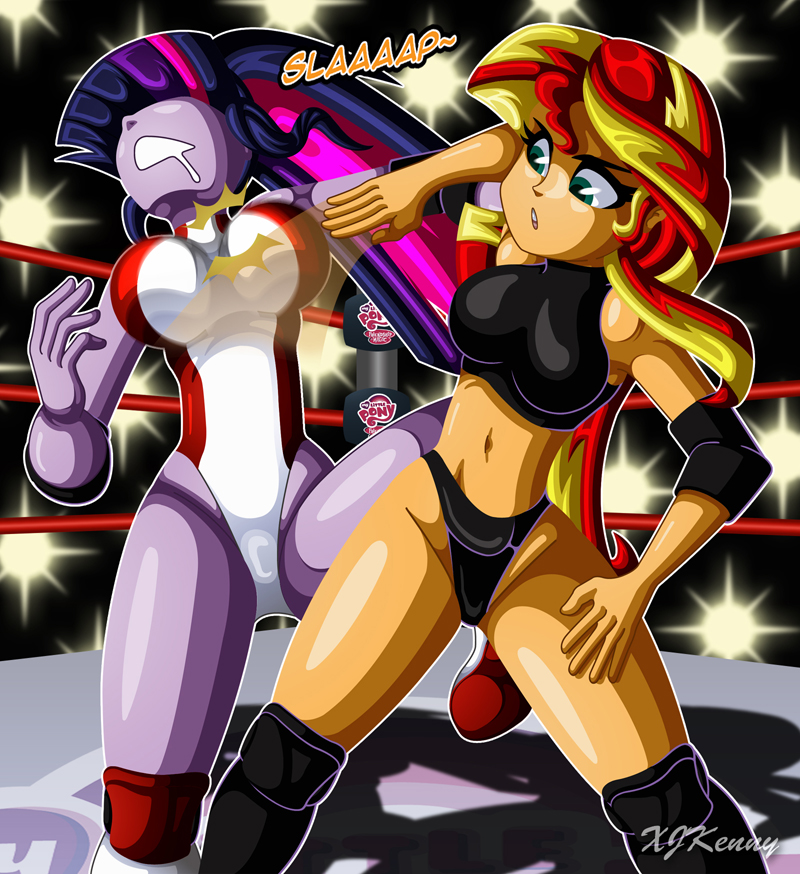 *Once her spontaneous blow connected, the enticed assassin took a quick glance towards her rival's jiggling chest meat, feeling her cheeks turn just a tinge rosy.* "Hmm...not awful, but they pale in comparison to my own~" *After making that snide comment, Kieda forcibly rolled Kozue back into the ring, casually sliding in after her while devising a plan regarding what to do next.*

Step One: Get Kieda back into the ring.

Step Two: Wreck her shit. Probably with a Goomba Stomp to the chest. Kozue was in that kind of mood.

Maybe things weren’t going to play out that simple in real life, but it was what Kozue was aiming for, and it didn't seem unreasonable on the face of things. She had Kieda fairly worn out, she was in control, she was about to take things into the ring, and-

It came out of nowhere, a blitz of movement that took the New Jersey Ninja off guard. She was just standing up when her opponent lashed out and struck her chest with a whipping chop, one that hit with enough impact to leave her ear ringing and skin sizzling. Kozue cried out and grasped her meager chest, reeling from the blow. It made her easy prey, left her stunned, and the next thing she knew she was being rolled back into the ring, flopping about all the way.

She came to a stop on her chest and began to push up from there, struggling to rise, one foot and the other after that. It was just a chop, not the worst thing in the world, but it had done a good job of knocking the wind out of her, and she needed a moment to get it back.
_________________

*With her malicious chop sending the message she wanted to communicate towards the audience remarkably well, Kieda eventually stood to all of her intimidating height, reminding both her adversary and anyone watching that she was capable of eclipsing the competition- Both figuratively and metaphorically.*

"Awww, just look at you- Writhing around on the ground like the timid coward you are~" *The haughty kunoichi remarked while stretching her right hand forward, snagging a palmful of Kozue's obsidian hair.* "Witnessing you flounder around almost makes me regret what I'm about to do next...almost~"

*Dragging the groggy woman by the fringes of her hair, she promptly slammed her noggin against the center turnbuckle to temporarily daze her. However, not content with merely leaving an impression, Kieda proceeded to ram her knees across Kozue's spine, drilling her maw against the reinforced padding!*