Did Kozue think that Kieda was taken out with one move? No.

Is that what she wanted Kieda to think she thought? Oh, yes.

So, mission accomplished. The more time passed, the better an understanding she got on where to press which button. A mental fight on top of the physical one - though that didn’t mean she could ignore the latter over the former.

If there was any doubt to Kieda’s claims on being a kunoichi, they were swiftly erased in the next moment, as the Fashion Assassin whirled around and shot her legs out, snagging Kozue’s head before she knew what was going on. She tried to pull her way out, make some kind of escape, and maybe, just maybe, she could’ve if she’d had the time.

But she didn’t have the time. Not before Kieda jerked hard and slammed her skull into the canvas, hammering it hard with the takedown. The New Jersey Ninja took it hard, rolled once, then sat up as she cradled her skull, sitting in a stunned stupor.
_________________

*As the reassuring* "WHUMP!" *That emanated throughout the arena reinforced Kieda's previous declaration of fleet-footedness, she couldn't shake the lingering feeling that Kozue wasn't entirely out just yet; The runway model may have developed a sense of detestation towards the apathetic acrobat, but she wasn't about to unintentionally underestimate her to her own detriment.*

"Need to...nnh...capitalize.." *Kieda muttered under her slightly exasperated breath, realizing that she had concretely made a name for herself in this bout with her previous blow, taking a brief second to analyze the situation: Approaching Kozue outright probably wasn't the most ideal decision, but she also wasn't that proficient with submission holds. Suddenly, she hatched a brilliant idea that was guaranteed to help assert her dominance in this skirmish!*

"Hmhm, I certainly hope you saved room for seconds~" *Flipping sideways and onto the bottoms of her designer boots, Kieda cartwheeled towards a vacant corner before ascending to the highest peak atop the turnbuckle, waiting for Kozue to regain a sliver of her consciousness before taking to the skies, knees jutting out to try and smash them into her face, trying to keep the pressure on with a colossal meteora!* 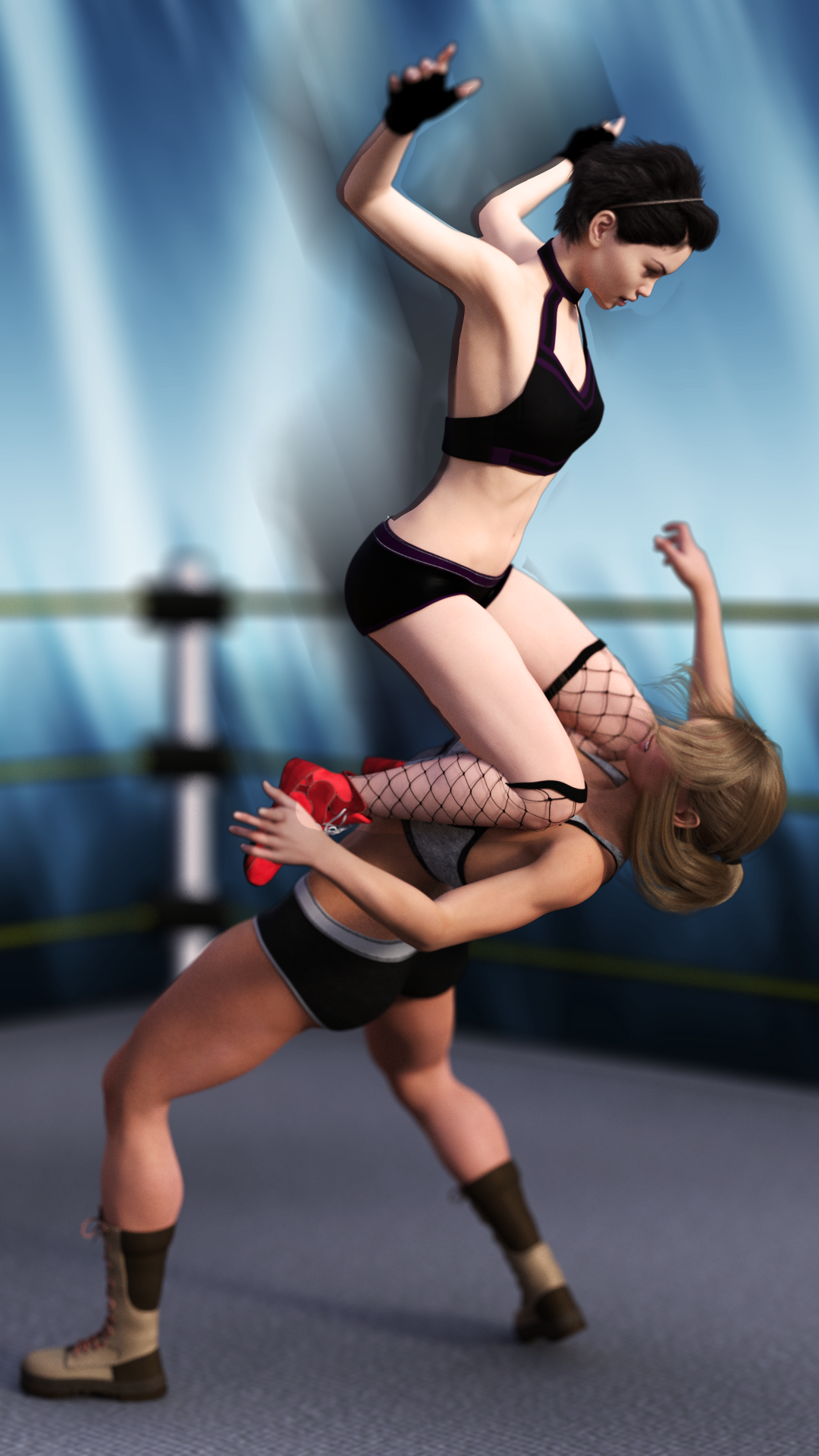 Okay, that was good. It seriously, seriously pained Kozue to admit, but yeah, that was a pretty good move, and it added a lot of credence to Kieda’s claim about coming from a ninja clan - it was the sort of slick move that she hadn't even had in her own arsenal until Benikage taught her, not the sort of thing you picked up from wrestling training or a standard dojo.

It was a sure sign that she needed to keep her guard up and focus on Kieda, never knowing what sort of sneaky move would come her way next. Case in point…

She was just starting to rise up and get her senses back when she noticed that the crowd was getting rowdy, sounding like they were expecting something. Since she doubted they would be experiencing hype over her wobbly ass, that meant that Kieda was up to something, and sure enough, when she looked up, she learned exactly what that was - Kieda was coming towards her with a meteora.

As much as she wanted to applaud the woman’s taste in moves, she was far too concerned with moving out of the way and not being flattened to get all that impressed. She threw herself back on her shoulder, tucked her legs in, and rolled out of the way, barely avoiding the blow and letting Kieda come down in front of her. But that wasn’t all - as soon as she came out of the roll, Kozue leaped forward, shot her legs out, and came towards her kneeling opponent’s chest with a short range dropkick.

*As the periwinkle blur tore through the skies with relative ease, Kieda experienced a horrifying revelation- Kozue might potentially be quicker than her, something she realized far too late as her body crashed into the ring floor with a sickening* "THUD!" *That left her indefinitely immobilized.* "Gguuhh...c..crap.." *She swore under her breath, trying to gather herself before something terrible transpired. However, much to her chagrin, Kozue would not remain sedentary and pass up a golden opportunity to inflict copious amounts of damage.*

*Regaining a smidgen of her earlier poise, Kieda wasn't able to locate the monotone kunoichi for a moment, but she soon realized that it was, in fact, Kozue that was stalking her!* "Ggguuaah!" *The sudden impact of the sable shadow's twin feet sent The bewildered model's feet stumbling into a corner, before finally collapsing against the turnbuckles in a crumpled heap!*

Oy, that was close. Too close.

There’d been little wrong with Kieda’s move in itself - she executed it well, came in flawless, would’ve hurt like fuck if it landed. It was just by good luck that Kozue was able to scoop it out in time, and it had been a close thing. Next time, she might not be so lucky, much as she hated to think that way.

So her best bet was to ensure there wasn’t a next time, and her attack made good ground on that. With her opponent resting in the corner, Kozue popped to her feet and charged forward, closing in fast. She threw her body into a forward flip as she neared to build up some momentum, the spun around in full the second her feet touched the canvas, throwing her ass into Kieda’s face with a running hip attack. If it landed, she’d take a moment to sit there, too - she could use a quick rest, catch her breath, and the ‘Fashion Assassin’s’ face was as good a spot as any for it.
_________________

*Struggling to regain her senses after such a devastating, double deluxe helping of feet Kieda was certainly in no rush to return to her feet, rather she tried to conjure up even an ounce of energy to cause the gears in her head to begin whirring yet again. However, Kozue wasn't going to be so generous as to allow such an event to transpire without interfering, launching her surprisingly corpulent backside directly into Kieda's maw!*

"Gggggnhh!" *If she were an average jobber, The Fashion Assassin would have keeled over from the discombobulating impact, but she was heads and shoulders above anyone backstage, and tonight, she was going to prove it as such!* "Nnhh...n..no..y..you...don't!" *Latching her arms across Kozue's midsection to firmly secure her in the suspended state she was in, Kieda proceeded to drop her, face first, into the ground for a modified glam slam!* 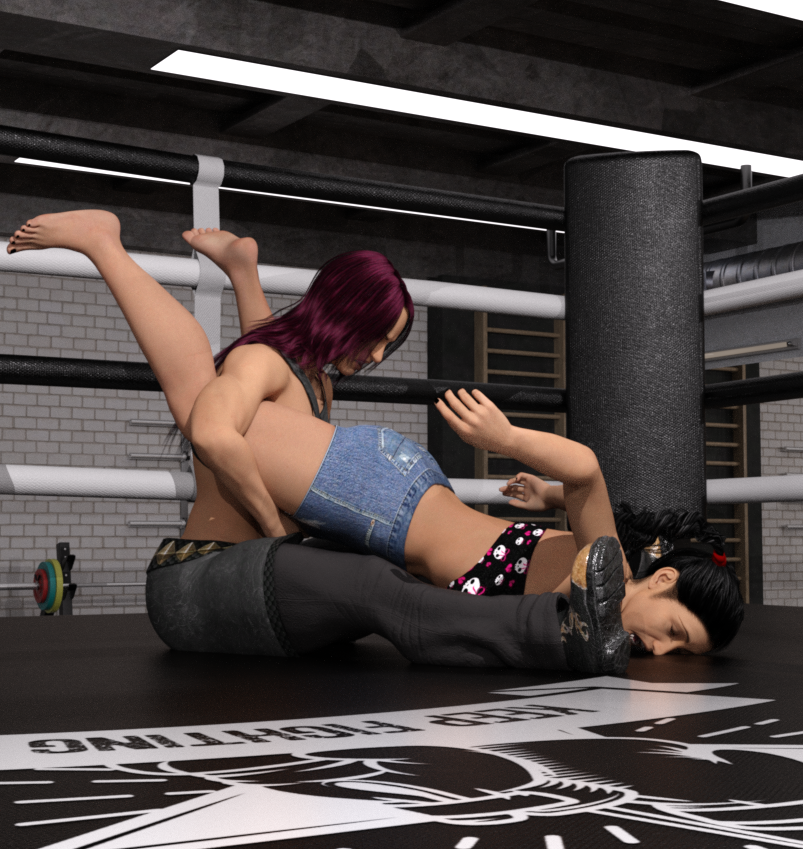 On paper, it seemed like an easy enough set up. She was going to ram her ass in Kieda’s face, knock her senseless, then do a little stinkface sit. Rile the crowd up, get under her opponent’s skin, and just have a little fun. Planting her butt on people’s face was a pastime Kozue had gotten into ever since she crossed paths with the facesitting queen that was Mariko Ishii.

That was the idea. In practice, things were different.

Kozue knew that right away, when she felt firm grasp her around the waist and she was lifted up, hoisted high with flailing hands. ”Fuckfuckfuck-”

Down she went and down she went hard, slammed chest-first into the mat with all of Kieda’s strength and weight behind it. It was a crushing blow, left her seeing stars, and she didn’t move much after the impact. Just laying there, legs draped over Kieda’s hips, groaning into the canvas.
_________________

*Up until that point, Kieda had been rather one-dimensional in her tactics- She had relied upon her congenital agility and speed, rather than her surprisingly powerful upper body. Kozue had been introduced to this aspect of The Fashion Assassin's latent strength in the form of her massive slam, sending her foe drifting into a state of unparalleled fragility!*

"Ggrhhh..a..almost...done..." *She huffed through her laborious breathing, proceeding to roll Kozue onto her shoulders while maintaining her unwavering grip across her body.* "J..just...stay...unconscious~" *The beads of perspiration from her alabaster forehead splashed onto the floor, representing the herculean effort she went through in order to regain control. Once prepared, she pushed herself forward, forcing Kozue's shoulders down for a makeshift pin attempt!* 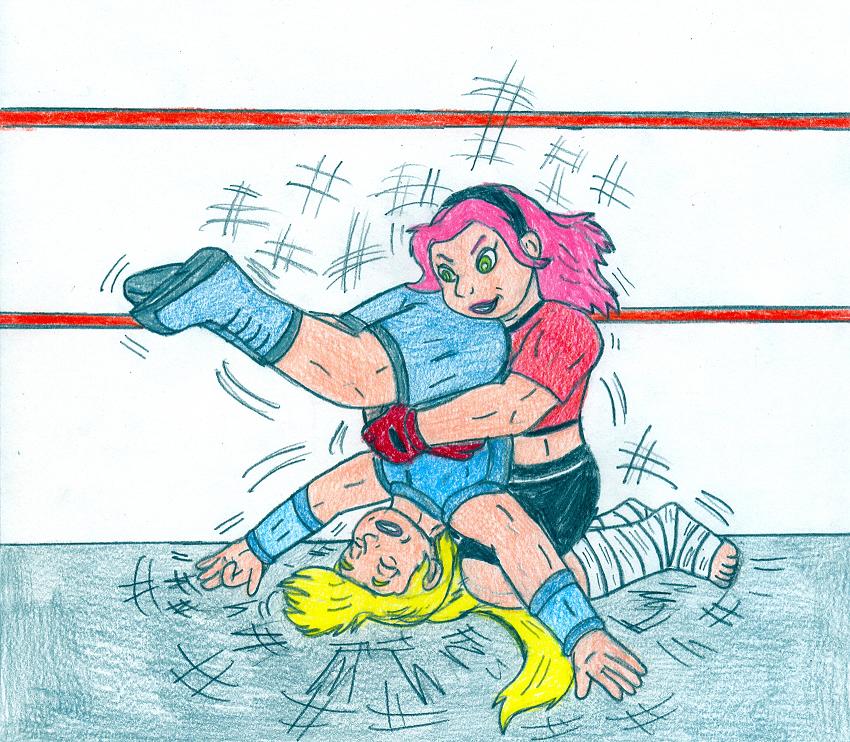 *Within moments, the moderator slid underneath the bottom rope and began the imminent countdown!* "ONE!" *The word echoed throughout the capacity crowd, a handful of spectators lurching forward to witness the potential demise of the shadow stalker, Kozue!*

Kieda had gotten Kozue good with that last attack. There was simply no denying it. The evidence was too clear - she was flat on her face, hurting barely moving after that shock attack. Her world had been thoroughly rocked, and stars were dancing about in her vision. She’d need a few moments before she could get up under her own power.

But done? Knocked out. No. She was far from that.

She’d prove that soon enough, too, when Kieda came over, flipped her over, and pinned her shoulders to the mat. She was still reeling from the blow, so much that she didn’t realize what was happening at first.

But the referee’s cry was more than enough to wake her up. As the hand came down a second time, she threw her legs straight up and rolled to the side, flopping back over to her chest with a pained chuckle. ”Yeah, sorry slick.” She planted one elbow on the floor and began to push her way back up. ”Nowhere near that easy.”
_________________

*While it was a pipe dream of Kieda's that her seemingly indomitable foe would be so easily conquered with a single, deafening move, she knew she had to at least try and send a message that she was not one to be trifled with. However, as Kozue's body remained stationary for longer than she had originally anticipated, the turquoise model's eyes bulged from the reality of her potentially winning this fight!*

"Nnhhh?!" *Much to her chagrin, Kozue swiftly reminded her that she wasn't about to snatch victory so easily, forcing The Fashion Assassin to extricate herself from the situation entirely while slowly beginning to recuperate a sliver of her vigor.* "You almost had me convinced otherwise~" *Her smarmy cadence as evident as ever, Kieda decided to test the waters by scaling a nearby pillar and ascending to the top turnbuckle, eventually lunging towards Kozue, feet extended, to try and slam them across her chest!*