Standing at the other side of the main arenas entrance, Hunter had found himself in a peculiar situation; he had been assigned a match, an opportunity to get a taste of the wrestling life, but instead of a regular match like he had been expecting he was instead "tasked" with what had been called a "Hentai Match". Prior to him joining AFW, he had heard of these match types, but believed them to be only hearsay, that, however, was not the case; they were entirely all too real, and now his first experience in the wrestling world was going to be oddest that it possibly could be. In the nights prior, Hunter had spent time researching what had gone down in these matches; to say that they were an oddity to someone like him was an understatement, and the fact that he had been chosen to participate in such an event was equally as odd.

Hunters train of thought was cut short as the sound of the announcer addressing the audience, and going over the matches rules and stipulations for the win. The announcer had then stated something that caught Hunters attention, that being that both of the match's contenders were making their debuts. So, whoever he was facing was about as new to this as he was, that made things a little bit more interesting. The announcer prepared the audience for the events first contender, timing his speech to Hunters entrance music, Hunter eat Hunter by Chevelle, letting it play over rather clear and crisp speakers of the arena, its volume matched that of the crowd who the announcer somehow got pumped over somebodythey never heard of, their cheers and the music echoing through the walls to the backstage areas. Taking the time to do a quick equipment check before his que to enter the arena, he looked down... 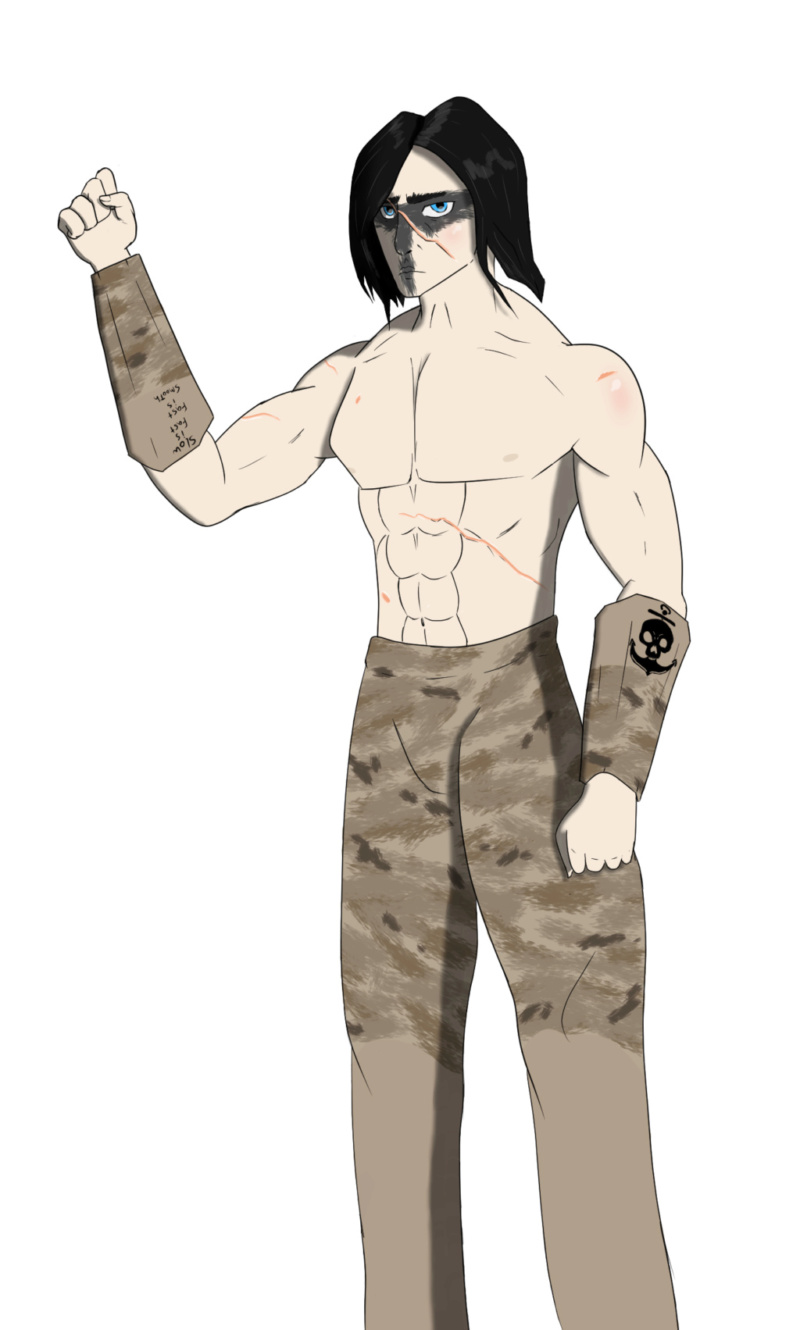 ... well, his 'kit' definitely screamed how ill prepared for this match he was, that didn't mean he was going to back down; No amount of ill prepped equipment ever stopped any Navy Seal from doing their task, and it wasn't going to stop this former Seal now, he'd just have to remember to get kit for a similar occasion on a later date.

As soon as his very brief equipment check was done, the song had raced into its more exciting tone, and the announcer stated the man's name, prompting Hunter to take a deep breath in an attempt to calm his nerves before exiting the curtains and into the arena. His eyes adjusted to the arena lights as the scarred man walked down the ramp to the ring, his appearance prompting some of the closer audience members to stare, and for some to whisper to their partners or friends theories on why he looked the way he did. It was a fact of life for veterans, Civvies stared at scars, and it was the worst insult you could give a veteran, besides insulting his mother or his career choice. It was an isolating stare that made you feel separated from society, because you were, even if the onlooker didn't intend to do it. Feeling so many eyes on the man did not help his attempt at composure, he could feel his heart rate increased as anxiety brought on by the stares raged its path in his mind. Finally, Climbing up the rings appron via the aluminum stairs that had been placed on either side of the ring, he slipped through the ropes and chose a corner to post himself at, waiting for his opponent to arrive; attempting to take the small amount if time to compose himself, he put on an expression that could only be described as, "one hell of a poker face.". 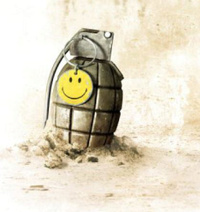 In hindsight, she should have seen this coming from a mile away. Then again, it was perhaps her fault that she put a lot of faith in AFW’s management.

But such faith would be misplaced. Mind you, it wasn’t that Sophie was the first woman in Friction to have their debut set in the other league. Tension’s reputation was questionable at best, but it still had a massive draw and a big fan following. The reason for that came to a certain appeal, one that’s all too familiar with her old league. In fact, that might be the reason as to why the Scot was placed in a Tension debut.

Despite the experience that Sophie brings from her old federation, it was a hard sell to the higher-ups to get her into the Main Roster. One look at her height and they saw her automatically as a Kawaii star. Could have been due to ignorance, not actually looking at the archives she has sent to management, which would have shown her taking on women, and men of varying shapes and sizes. She’s been through this song and dance enough times that it made her jaded. An American federation underestimating her was more than enough, she sure as hell didn’t need a Japanese league doing the same thing.

Granted, AFW was less bad than the other federation overseas. Though only just a bit. It seems that management wasn’t entirely convinced that she could handle the most significant competition that this league has to offer. So her first match would not be in Tokyo, it will be in Kyoto at Tension’s arena. Truth be told, she wasn’t too bothered by it anyway. As fun as the Friction girls were, and she’ll hopefully get her hands on them soon, it had been a while since she battled with a guy. The last one was DJ, which she was glad she got her revenge. So that would at least scratch that itch.

“Nae bad.” She said to herself as she sat down, pale legs crossed, watching the man as he makes his entrance. “Looks strong, probably a threat. A wee bit shy, though.” Sophie teased her hair and chewed on the pen she was using to take notes. She’s already clad in her outfit, which is perhaps a bit better than what Hunter had in mind. “At leest he’s big. Which means I’ll look guid tossin’ his erse around.” Her thought wondered momentarily…it was a cute arse! She giggled and shook her head. “He’s nae guid enough, girl. Get a grip.” Sophie mumbled. She would soon hear the knock on the door, the stagehand alerting her that it’s time. Hopping off the bench, Sophie would skip along the entrance.

With his music dying down, Sophie came out next, her own theme more upbeat as she skipped along the ramp. She had a beaming smile as she descended down, feeling she has more eyes on her than expected. Might be because of her unique look, but it did appeal to the masses at Tension. No wonder management decided to make it official. Hopping onto the ring apron, she ducked underneath the ropes, her bare feet gracing the AFW canvas for the first time. With a sigh, she looked over at her opponent. She was told that this was also his debut. And he looked even more out of place than the Scot does! “Guid day! quite th' interestin' gie up, ye got thaur.” Her Scottish accent flowed through as she looked up at the man. "Frae th' looks ay ye, ye main be toogh. aam excited fur thes!”
_________________

Hearing a more upbeat tune than his entrance music echoe through the arena with the crowds cheers and chimes that following suit, Hunter, who had taken a resting position on the left most turnbuckle opposite the ramp, lifted his head and caught site of his opponent. She skipped with a clearly excited smile down the entrance ramp, which illuminated the idea that she was probably much more comfortable in this environment than He was; and while that was an assumption, as for all Hunter knew she could probably be as nervous as he was under that smile, but that most likely wasn't the case as there was little to no give in that skipping motion or that smile she wore.

As the woman made her way into the squared circle, Hunter pushed off his secluded corner and begun walking towards the middle of the ring to greet his opponent, and was met with a rather peculiar sight that helped break his once solid expression for a short time. Often when meeting a new person, Hunter found it easier to gage them or who they were, based on their eyes which usually said more about someone than a single conversation did; so when he tried to meet his eyes with his opponent, he realized he had to look down further than usual. Hunter was taller than most, but his opponent, well she was small, very small, in fact her head only reached the top of Hunters bicep and the bottom of his deltoid. He calculated in his head that the woman infront of him was probably four foot eleven, and while that height difference between them should have scared her, or at least make her uneasy, from one look of her eyes, it didn't. The woman with the pink and green hair in front of him looked up at him seemingly unwary of the size difference between them; while at first her lack of caution in the matter came off as a dumb naivete from the girl, which seemed the most certain thing to come from someone who wasn't just young like she was, but was having her debut as well, it was apparent to Hunter that her lack of worry was less a lacking amount of caution and more a certainty of her own abilities.

Hunter's train of thought was brought to a halt when the small woman started talking. Her incredibly strong Scottish accent buried itself in his ears as she greeted him him and exclaimed her enthusiasm for the match ahead; for a moment, Hunter didn't say anything, his poker face was gone and replaced by a rather surprised expression, one eyebrow raised, expressing how little he was prepared for the second wrestler in the federation he'd meet to be another European like him and Charlotte Harrenwood prior. "I-I...", Hunter stammered for a moment, trying to peice together a coherent sentence for the woman before him. "I am excited for the match as well, ma'am...", Hunter finally spoke, his Irish accent, however diluted it had been from his years around American's, flowed with his gravelly tones into a voice that could often be defined as deep and even somewhat sultry even if he didn'tintend it to be, "...Though, I won't lie, I am rather nervous about this.". With his expression having returned to that frosted over look he had warn only moments ago Hunter reached out a hand for her to shake. "Cadence 'Hunter' Cahill, Ma'am, and as I hear it, this is your Debut as well, yes?".