» Kieda Uzai vs. Kozue Kaburagi - Ninjas Do It Stealthily
by acuyra Today at 7:24 pm

» Kaitlyn Sweeney vs. Bubbles Burste - Birds Of A Feather
by acuyra Today at 7:23 pm

The time finally came for Chika to debut in AFW.

In truth, she was planning to come for a long time, since her child needed a good school, and indie wrestling money wasn't quite enough for that. So when AFW came with a good value contract, Chika had to snatch it up as soon as possible.

After finishing her last few booked dates on indies, there she was, ready to go. Her first match in the company was quite intriguing. A judoka, which in wrestling sense for her meant grappler, was more advantageous against her style as a striker, but that wouldn't make the bout impossible for her in the slightest, as she had plenty of moves to beat out her opponent's counters

With her theme playing, and wearing her helmet, Chika made her way down the ramp in a menacing sense, though fans from her indie days were in the crowd, cheering for her.

Once inside the ring, she picked up her Raven helmet upwards, holding it with one hand while wearing a determined look on her face. Throwing it to the outside, the Raven Night then went to upper right corner of the ring to await her opponent.
_________________
My fighters:
Melody Serperior (Friction)
Navi Florges (Friction)
GASTER (Friction)
Alice Gaster (Tension)
S.A.S. (Tag Team)
Chika Igarashi (Friction) 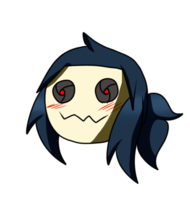 "And here I thought I'd be away from the bloody birds back at home..."

Sophie joked as she muttered, the edge of a pen that's she's holding tapped on her chin, seeing the arrival of a new opponent. A debuting opponent. The other hand held a notepad, filled with a few scribbles she made as she looked on the action. She was already dressed up for the occasion, the Judoka sat on top of the box, facing a monitor that backstage uses to wait for their cues. Pale legs crossed underneath her skirt as she looked on.

"Hrrm, she ain't bad. Can't be too tall, the wee bird. Still a threat. Unlike the shy guy." She chuckled, her mind bringing back to the time she rocked Mr Toy Soldier's world and then some. It was a fun time, only because she made it fun. Still, Sophie longed for a more serious bout. One where she could really show off what she's capable of.

And now she gets it. Paired with a newbie, it felt wierd for a relative newcomer like her to welcome Chika into AFW. Not that it hasn't happen, these things happen a dozen of times. Either way, with how serious her get up is, Chika must be a tough opponent. Though there's only one way to find out.

Soon as she's alerted, Sophie would hop off the box before her diminutive form passes through the curtains once her theme song hits. All smiles, the Scottish Judoka was happy to see a few more fans cheering for her this time. That is a nice improvement, that she can't deny.

Hopping onto the ring apron and entering through the ropes, Sophie would skip around the ring, giving a wink to the Raven as she would throw her white jacket away outside the ring.

Chika couldn't deny that Sophie was full of spunk. She had read up on Scottish Judoka, on how her path has lead to pro wrestling. Though Chika had been in wrestling far longer, she couldn't deny Sophie's journey was intriguing in it's own way. With her foe's experimental style, it meant she couldn't underestimate her.

Once she was inside, Chika returned a friendly, but competitive smile back: "More than you are ready for me."

With both women ready for the encounter, Chika nodded towards the ref for the start of the match. Once Sophie did the same...

Chika carefully left her corner. She didn't want Sophie to catch her, believing that she had advantage in any and all grapples that were to come in the match. So instead of starting things off with Collar and Elbow tie up, she instead decided to unleash a hard kick to her foe's legs to test the waters...
_________________
My fighters:
Melody Serperior (Friction)
Navi Florges (Friction)
GASTER (Friction)
Alice Gaster (Tension)
S.A.S. (Tag Team)
Chika Igarashi (Friction)

“Oh really now?” Sophie gave a grin back at the Raven, giving her shoulders a roll as she sized her up. At the very least, Chika didn’t have a MASSIVE height advantage like the last opponent she faced. Although it was pretty fun tossing his arse around the ring. This one is much more manageable, but even the smallest of opponents can bring the biggest fight out of you if Sophie could attest. It doesn’t help much that she couldn’t find anything about the opponent, so Sophie will have to go in blind.

Not that has ever been a problem for the judoka. Giving the nod, the referee rang the bell, and both diminutive combatants come out of their corners. Feet padding along with the canvas as Sophie edged closer. She had already decided that she wasn’t going to take the lead and rush in, considering she doesn’t know all about Chika. Relying more on reactions than being outright aggressive, which does have benefits.

For one thing, grappling isn’t just about being the biggest. Momentum plays a significant factor in judo, and Sophie can rely on her natural instincts, hammered down by countless matches and spars. Soon as that kick swung towards her, Sophie brought her leg upwards so that the kick smack towards her calf more. Soon as she felt the impact, the scot dashed in, seeking to press her hip on Chika’s as she attempted a Koshi guruma and take her down to the mat.
_________________

Her kick was easily blocked by her rival's calf, Chika making an unsatisfactory grimace at feeling the calf of her rival...

...but before she could retreat away, Sophie would rush quickly towards her, grasping her neck, and pressing her hip to her body, as she tossed the Raven Knight back onto the floor with ease!

"Oooof!", she let out, feeling the hard canvas against her back, trying to roll away from the Judoka to collect her bearings!
_________________
My fighters:
Melody Serperior (Friction)
Navi Florges (Friction)
GASTER (Friction)
Alice Gaster (Tension)
S.A.S. (Tag Team)
Chika Igarashi (Friction)