» Maria Fernanda vs. Suzumi Ishikawa
by HighFly Today at 3:19 pm

The last time Daisuke had wrestled Belinda it was quite the tough contest for the two wrestlers and in the end Daisuke was force to admit that on that evening, Belinda was the better wrestler. Since that evening, the two of them had gone their separate ways to further their career but that loss had always bothered him and on top of that having to admit that Belinda was the better wrestler really hurt his ego. Daisuke wanted to make sure he was ready and prepared to face the blonde the second time and this time the stakes would be even higher. There wasn't going to be any flukes this time, the two agreed to wrestle in an hour-long ironman/woman wrestling match with the person gaining the most falls at the end being the victor. On top of that, it was going to be inside a sauna wrestling room.

In his locker room, Daisuke took a cold shower just before changing into his wrestling briefs. He grabbed a towel and a bottle of water, not bothering to change into his boots to put on elbow/knee pads. It was going to be a grapple focused match, or so he thought, and with the sweaty conditions the boots and padding wasn't going to help. After changing and grabbing his stuff he would exit the locker room area.

Making his way towards the sauna wrestling room, the prince would stop once he reached his destination and would wait for his opponent. He put his towel on the towel rack and drank from his water bottle before putting it on a nearby table. His loss against her was fresh in hid mind but this time they were truly going to settle this. "Belinda Northman" he spoke out. 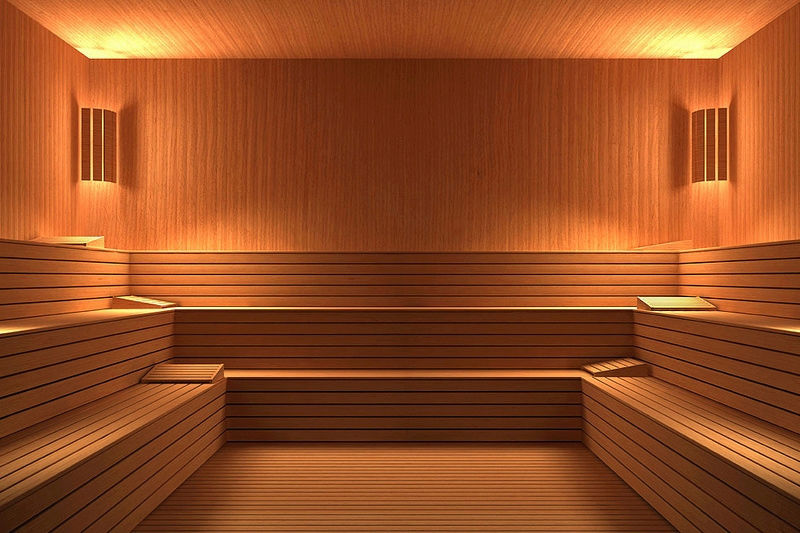 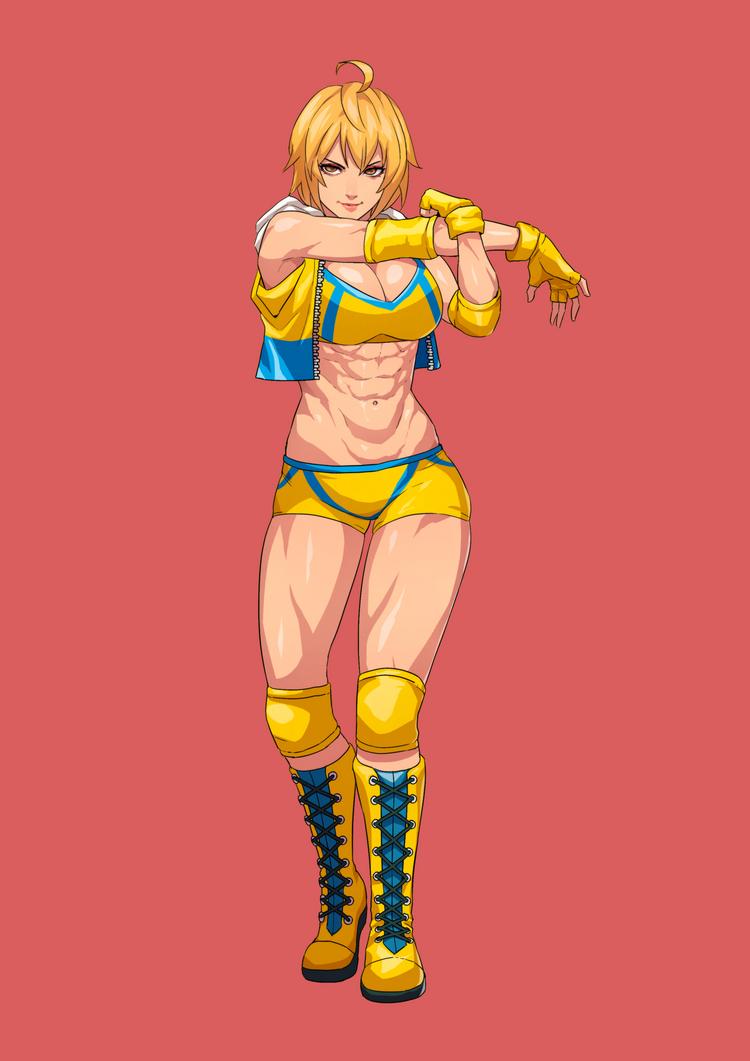 Belinda hadn't interacted with Daisuke in ages, not since their last bout where she had managed to best him and of course make him eat his words. She was a bit unsure what the reason behind this match was. Facing off against someone for an hour was a grueling even in and off itself but in a sauna? Belinda could only take solace in the fact that she was actually pretty fond of taking long saunas. Unlike her older sister who hated the heat, she quite enjoyed it when it was a sauna.

She rolled her shoulders a she stepped up into the room that lead to the sauna, removing her jacket as she did and hanging it up as she chose to be a bit less dressed for this match than usual. Throwing her gaze at the sauna room, Belinda would move towards the sauna, opening the door and entering it as she would throw her gaze towards Daisuke.

" Daisuke Takeuchi, been a while." Belinda let out as she walked into the sauna and placed her hands on her hips, stepping up closer towards the Wrestling Prince.
_________________

It had been a long time since their last interaction but the loss was certainly fresh on Daisuke's mind. Especially because of what he had to admit after he had lost to her due to the agreed stipulation. The prince wanted to challenge himself and Belinda to a more grueling match so he decided to up the ante by not only having this be a an hour long Ironperson match but also one that happens to be in a sauna room.

After hanging his towel inside and drinking from the water, Daisuke made his way into the sauna room. The steam wasn't flowing in yet, they had to wait before the match would actually start before the sauna steam would start to flow from the vents. Soon, Belinda did make her arrival in her traditional yellow wrestling gear minus the jacket.

Once she was in, the door of the sauna was closed and the steam would lightly flow in the room. Daisuke and Belinda would then meet face to face. "It has been. Are you surprised by my challenge Belinda?" he asked her.
_________________
Tension:

Belinda would walk up to Daisuke with her hands upon her hips as she nodded her head. She would look at him up and down, it seemed as if he had done a good job keeping himself in shape since they last saw one another. Shrugging her shoulders a bit at his question.

" I figured you were still a bit salty about losing to me in our first bout, right?" Belinda said as she answered him pretty straight, giving him her fair opinion on the matter. "Though I don't really mind that. Any rematch is good by me. I'll just do my best like always to kick your butt and pin you down." Belinda spoke out as she would take a step forward towards him.

" So, ready to get this started?" Belinda said as she would roll her shoulders and then start to raise her arms, bending her knees a bit as she would try and get into a grappling stance.

The two rivals would stand in front of each other, Belinda would place her hands on hr hips and would nod. Both of them would take the time to eye each up up and down. Belinda seemed impressed at Daisuke's ability to keep himself in good shape. The prince would admire Belinda's physique too it seemed as if she had gone even more fit than their last match.

Belinda was always the confident woman, not shying away from Daisuke and would speak her mind. "Heh, a little bit" Daisuke would admit, smirking back at Belinda. "We'll see about that Belinda. This time I'm much more prepared. The real reason why I wanted to wrestle you is because I wanted to see how far the two of us have improved since our last bout. If I want to become the best in AFW, I have to beat wrestlers like yourself" he admitted.

The blonde would then take a step forward, confident in pressing up against him. Daisuke stood his ground, glaring into her eyes. "Lets wrestle" he replied.

Belinda trusted in that what Daisuke was saying was true, that he wanted to once against test himself and see how the two of them had grown since their last bout. Nodding her head as she would raise her arms and the steam started to flow into the sauna.

The match was on it's way as the clock began to tick! She raised her arms up and so did he as Belinda would step up and lock up with the Wrestling Prince in a lock up! Collar and elbow, as she would put one arm around Daisuke's head. Pressing into him as she would start to try and force Daisuke backwards into wooden benches!
_________________

The two wrestlers nodded at each other before getting ready to get down to business. The two would raise their arms when the clock began to tick ready to start their battle. The steam flowed in gently, tickling their skin. It felt nice for now but things were about to get messy later on.

It wasn't the most spacious space for a grapple battle but it would suffice, Daisuke and Belinda locked up in a clinch and the two started to push each other back into the wooden benches.

Belinda grunted as she pressed into Daisuke and he pressed against her, narrowing her eyes a bit as she would try and fight for the small space that they had to fight in. Struggling against Daisuke she would hear her foe, ask her a question. Shaking her head a bit, Belinda would of course respond.

Both of them struggled for supremacy, butting heads and pressed into each other. They were locked up in a clinch with the two pushing each other harder and harder. Daisuke glared back into Belinda's eyes, he could see she was determined and she could see it too. Still, without the rush of the crowd it was easy to engage in some small talk to distract one from the heat and the sweat.

"Nrgh argh! D-does that put me at a disadvantage?" he smirked. After a while of the two going back and forth in the stalemate, the heat and steam was getting to him which made his concentration level drops allowing Belinda to push him back a step or two.
_________________
Tension:

Belinda and Daisuke started to push against one another, struggling to take control in this lock up between the two of them. Yet, Belinda started to feel how Daisuke was slowly faltering....bit by bit. Sweat was already forming on their frames and Belinda had to admit that Daisuke was quite strong....

However, perhaps because of her being so used to Sauna's as she was. After all, back in Sweden after every time she went swimming she spent a bit of time in the sauna, same with after a long work out. Just to relax afterwards.

Belinda would soon feel Daisuke take a step back and then another one. " Yeah maybe..." Belinda joked as she would put in some extra effort to try and force the Wrestling prince back all the way to the wooden bench! Practically try and force him to drop down on his butt and be seated on it.
_________________