Search
Latest topics
» "Hurricane" Hanna
by Kelsea Today at 1:54 am

» Time to work the rust off [For LunarWolf]
by LunarWolf Today at 12:31 am

» Atalante Pallas Vs. Claudia Augusta - Wine Pit Wrestling
by LunarWolf Today at 12:30 am

» Cosplay Battle: Angela vs Celeste
by kiranar Today at 12:02 am

Battle in the Boudoir! Mae Day vs. Asaki Asakira

Battle in the Boudoir! Mae Day vs. Asaki Asakira

Mae woke up with a snort as there was a loud knock at the door. She groaned and got to her feet, stepping cautiously over snoring guests and discarded bottles and cans. The pink-haired woman opened the door to find a cute little PA, fist raised as if to knock again. The PA glanced down and made an adorable little noise of surprised embarrassment as she discovered that Mae's sleepwear was basically transparent.

"Yes, babe? What's up?" Mae inquired while stifling a yawn. She stretched a bit, smiling slightly as she looked at the PA through bleary eyes.

"U-um... You have a match, Miss Kendrick. In a few minutes." The PA purposefully kept her eyes up.

"Oh, damn. Do I have time to slip into my outfit and put my face on?" Mae batted her eyelashes hopefully at the poor young woman, who was by this point as red as a beet.

"Oh, you don't have to do that, Miss Kendrick. It's a bedroom match. You could probably put some undergarments on underneath, but-" Mae giggled, cutting the PA off short.

"Lead me to the bedroom, babe." Mae laced her fingers through the PA's, and followed her to the special bedrooms that existed for these kinds of matches. The PA showed Mae inside and then shut the door quickly. Mae glanced at the camera as she lounged across the large bed, giving a quick, cheeky wink. She laid there as she waited for her opponent, fighting off yawns as she continued the process of fully waking up.

When the PA came to get her, Asaki was in the process of cleaning up and getting changed out of her scrubs. "Your match begins in a few minutes Asakira-chan!" said the young girl, who was no doubt another AFW hopeful. The nurse waved at her through the shower curtain, showing her acknowledgement, before finishing drying herself off. She then pulled aside the curtain, stepping out fully nude in front of the hapless PA, who immediately blushed and averted her eyes from the nurse's naked body.

"P-please put something on!" the blushing PA said, grabbing Asaki's nightgown and holding it in front of her face.

Asaki laughed. She took the nightgown from the ring assistant, pulling it on before patting the embarrassed girl on her head. "Just kidding!" Asaki said, "Gosh it's so much fun to tease you! When you do join AFW though, try to be a bit more resistant eh? Otherwise someone like me is going to completely take advantage of you!"

"I know that!" the PA replied, puffing up her blushing cheeks. She turned around to lead Asaki to the apartment suite where her match would be, with a giggling Asaki following close behind. The nurse stepped into the apartment and looked around at first, getting her bearings and admiring the furnishings. The room itself looked lavish but old-fashioned, carpeted in dark thick shag, with dressers and drawers and a wardrobe all looking like it was made from aged mahogany. In the middle of the room was the bed/wrestling ring, an enormous four-poster with the curtains removed. On top of the bed were white sheets and pillows piled high, giving an impression of a soft and cozy environment.

As Asaki moved closer to the bed, she found someone already on top, lounging half-asleep. Asaki recognized her pink-haired opponent immediately. The nurse stepped over quietly, not wanting to disturb Mae too much as she slowly leaned over her opponent.

"Wakey wakey Mae!" Asaki said softly, tapping the girl on her shoulder. Once Mae stirred, Asaki would sit back on her knees with a cute smile on her face, hiding the naughty thoughts she had as best as she could while her opponent got ready. 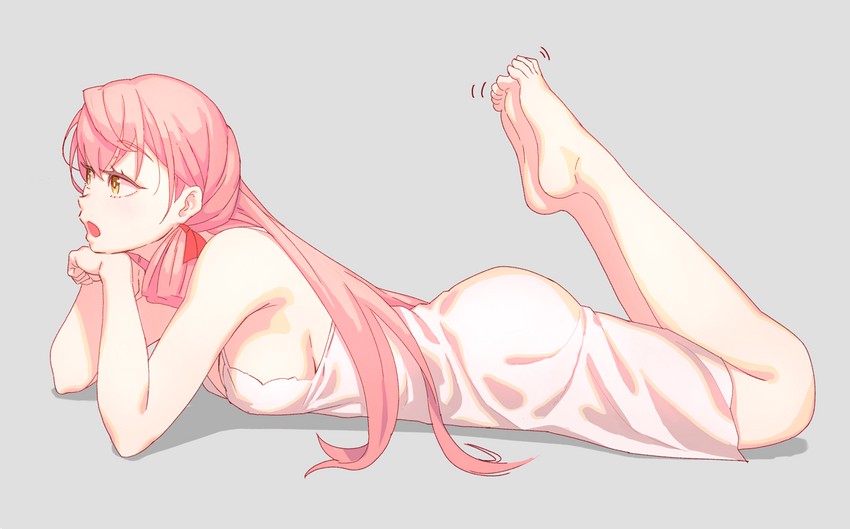 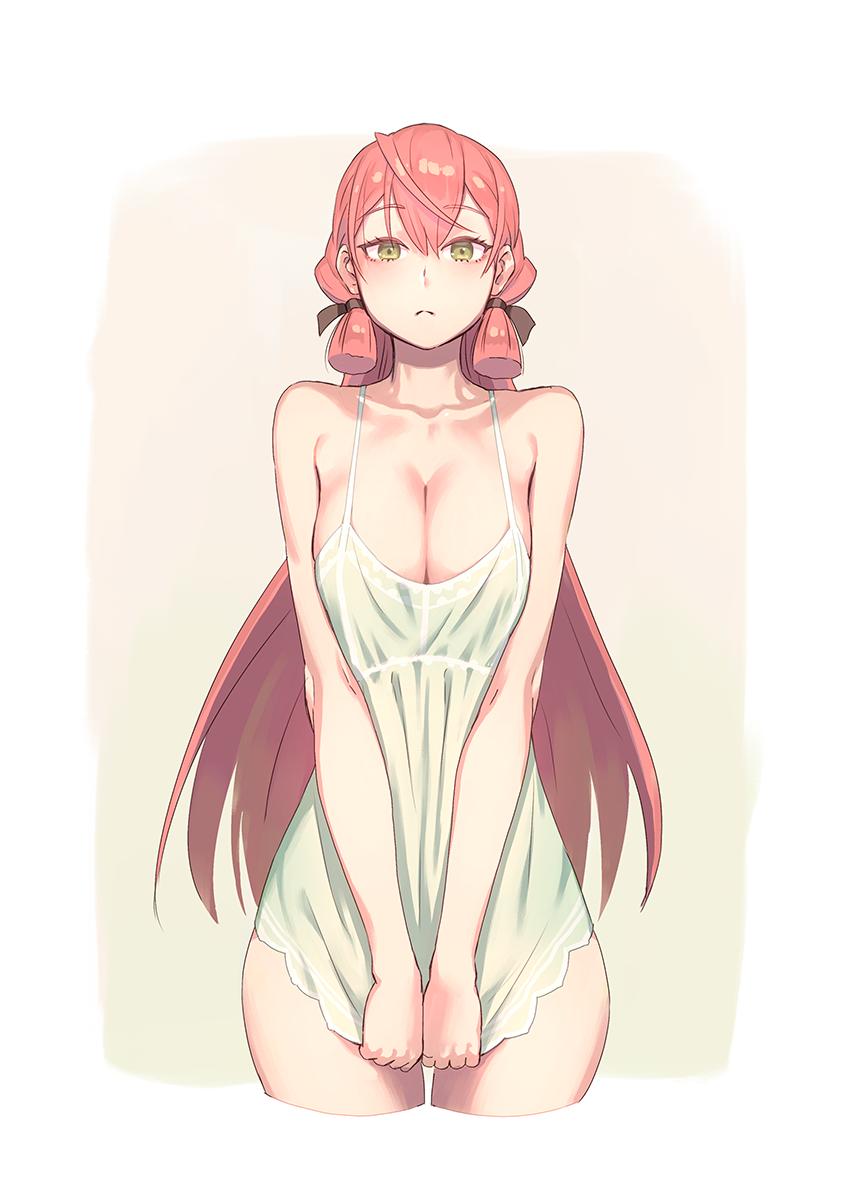 Mae squeaked as Asaki tapped her on the shoulder, startling her back to full wakefulness. She stretched out in a deceptively languid display before getting onto her knees facing her opponent. She took in the nurse's pink hair and giggled, smiling happily.

"Oh. My. God! I love your hair!" She squealed, her voice rising an octave in pitch. She leaned back and studied Asaki carefully, noting her curves and looking back up, her smile a lot more perverted than it had been seconds before.

"They paired me up with a sexy one... Babe, I love your nightgown, but it's gonna go bye-bye pretty fast. You understand right?" She smiled and got close, tracing a finger softly along her opponent's arm.
_________________
The House of Divas

"Thanks! I really like your hair too!" the pinkette nurse responded, "Great minds think alike, it seems!" She ran a hand through her pink hair, letting it cascade down from her fingers. She wondered how Mae's hair would feel in her hands, would it have the same silky smoothness?

As Mae looked her up and down, Asaki was also busy ogling Mae through her transparent nightgown. "Gosh what a body!" Asaki thought. Mae looked perfect in every way, and with every movement she enticed Asaki further. The nurse was already starting to get aroused, her nipples just barely poking through the top of her nightgown.

"I wouldn't want it any other way," Asaki said, gently pulling on her nightgown to almost reveal her nipples, then smoothing it out with a playful smirk. She moved in closer to Mae, leaning in until their faces were practically touching. "I wonder though, who will be naked first?" she said, setting out the first challenge of their match.
_________________
The Party!

Mae had the self-awareness to blush slightly as Asaki took in her unkempt appearance.

"I promise I'm not usually this messy. I had a little get-together last night and it went a little late..." She giggled self-consciously, running fingers through her own hair to try and smooth it. She noted her opponent's nipples becoming visible through the nightgown, and smiled slightly. When her fellow pinkette leaned in, Mae let her finish talking before leaning in, catching the nurse's lips with her own as her arms pulled Asaki close. She tried to catch the hem of the nightgown and pull it over her opponent's head while she was distracted.

"Mhmm, yes it will!" Asaki said with enthusiasm, "Not going to lie, I've been looking forward to this all day." She continued to lean in closer, until suddenly Mae leaned in as well and locked her lips with a kiss. The pinkette nurse's eyes widened in surprise for a moment, before she relaxed into their mutual kiss. Her arms went around Mae's waist as well, hugging their bodies together closely. Asaki could feel Mae's sexy tits press against her own through their thin nightgowns, their hard nipples pressing into each other sensually.

Mae giggled as Asaki accused her of moving quickly. She squeezed the nurse's butt cheekily, peppering kisses along her jaw.

"Of course I move fast! No other way to move, if you ask me." Mae giggled as Asaki pulled her nightgown up as well, revealing the pornstar's smooth curves. Then, the sexy nurse started a titfight, and Mae made a little noise of excitement as she engaged eagerly, her nipples dragging over those of her opponent repeatedly as she rubbed and pressed her tits against her Asaki's.
_________________
The House of Divas

Asaki's hands slowly moved behind Mae's upper back. She pulled her opponent in closer, pushing their breasts even tighter. "No backing down until one of us gives!" Asaki challenged, taking a deep breath and arching her back to puff out her breasts even more, hoping to push her nipples deep into Mae's breasts.
_________________
The Party!

"I've never been one to back down from a challenge, babe." She groaned as Asaki's nippled pressed into her own, and she retaliated by pressing forward. She nipped the nurse's neck gently as her nipples pushed back against her opponent's onslaught.
_________________
The House of Divas

Asaki was enjoying the tit duel as well, letting out small loans as she felt her opponent's bountiful orbs mash against her own. The softness of Mae's skin felt so good against her body, while the surprising firmness of her breasts pressed back against Asaki's, not giving the nurse's breasts one inch. Mae even leaned in to nip at Asaki's neck, increasing the pleasurable feelings rocking through the nurse's body.

"You're good at this..." Asaki moaned, "I should've expected as much from someone so experienced..."

Pressing forward, Asaki would try to slowly drive Mae backwards onto her back. She raised herself higher on her knees and leaned in, pressing down from above against Mae's body to drive her downwards. Their breasts seemed evenly matched, so Asaki wasn't afraid of her breasts giving out against her opponent's, but neither was she making any headway against Mae's firm orbs. The only way she could get an advantage in their struggle is if she managed to get on top!
_________________
The Party!