Fighting Style: Jack of all trades! Master of none! María is fairly skilled in every type of wrestling but not a master in any of them. Primarily using her vast move set to out wrestle her opponents, she will take note of what their style is and start using its counter. Fairly clean in the ring, María won’t use underhanded tactics unless her opponent does. After that she’s willing to go as low as them and brutalize them.

Amethyst Bull: María makings the motion of a bull and imitates its horns using her fingers before doing a Battering Ram.

Tequila Drop: While having a foe in head lock María will pretend to take a shot of Tequila before performing a DDT.

Amethyst Kneedom: Climbing to the top rope and blowing a kiss to the crowd and showing off her tattoo a bit. María will jump off and perform a diving knee drop.

Juggernaut Spike: A brutal BackBreaker that’s performed when an opponent it dazed is weakened. Often María will give them a kiss on the cheek before performing the move.

Endurance: ★★★★★
An absolute juggernaut when it comes to taking hits, María will often take hits to get closer at her opponent. Often acting like a solid brick wall it takes a lot to bring down María. From her stubborn will to fight to her brutally strong body.

Strength: ★★★★☆
María is pretty strong! While not as strong as the 6ft+ giants of the AFW, she can still lift other wrestlers with ease! Often showing off this strength by flexing her toned body and trying to do feats of strength!

Speed: ★★☆☆☆
Speed ain't the name of the game when it comes to being a juggernaut. María is on the slower end compared to other wrestlers. By no means does this mean she’s slow but other wrestlers definitely can outrun her.

Technique: ★★☆☆☆
Jack of all trades, Master of None! María Technique with each of her style is below a wrestler who specializes in the style is. Often having a bunch of little mistakes that can let other wrestlers counter her.

Defense: ★★★★☆
A very impressive defence that juggernaut should have. Having good reaction speed and knowledge, María can block and deny many moves. While countering them is a whole different story for her. She can at least hold them back.

Strikes: ★★★☆☆
Able to throw a mean punch or kick, María can dish out some good damage, but she isn’t at a boxers level when it comes to striking. So she won’t be knocking anyone out regularly.

PowerHouse: ★★★★★
The First style she learned! Her most practiced style by far, which lets her slam wrestlers down to the canvas with ease. She probably won’t be out wrestled in this aspect!

Counters: ★★☆☆☆
Probably her weakest area overall. She can definitely punish a mistake if she sees one but isn’t the best at noticing them.

Aerial: ★★★☆☆
Pretty Average at Aerial moves. She can definitely do a jump off the top rope but don’t expect her to do flips or spins.

Submissions: ★★★★☆
Probably her second best style. She loves just having opponents willing submit to her strength. Knowing a wide variety of holds, María is very dangerous in this area!

Appearance
María is a tall and athletic woman. With a very carefully sculpted body and black hair with a dyed blue after tones, her main feature are her Amethyst colored eyes. María also has a light purple tattoo on the side of her body that she adds to as her life goes on. Her wrestling attire mostly consists of a Amethyst colored bra with black tones and a light black pair of pants! Her casual attire is mostly variations of this as she likes to show off her toned abs. 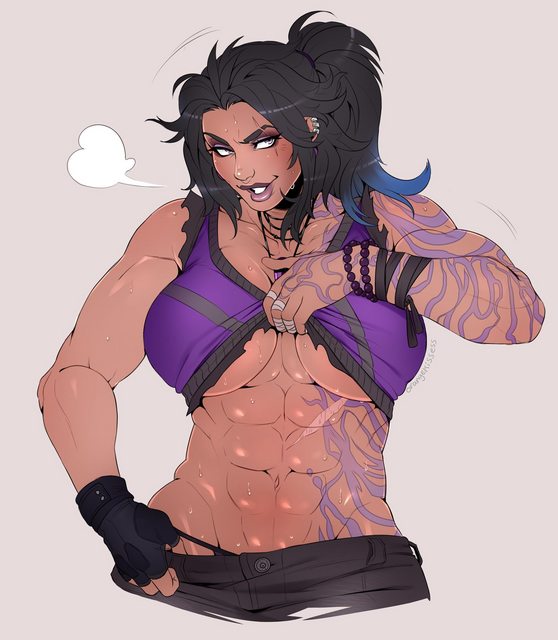 Personality
Hotheaded yet caring María is the very definition of a moma bear. Quick to confront others, she acts before thinking most of the time, often words coming out of her heart instead of her mind. Very emotional María is taunted easily and enraged even quicker. Often getting enraged over insults about her sculpted body the most
In the ring she is a ruthless mountain of muscle. An absolute juggernaut that is unflinching and unwavering. Some call this bravery, but most just call this being stubborn. While she won’t use any underhanded tactics if self seeing them as immoral, she may make exceptions… For rather scummy wrestlers.

Past/History
María was born in the Rural town Suchiapa in southern Mexico to a family of farmers. She was a 4th generation farmer and was the youngest of 4 siblings. Life was simple for the young María. Each day as a kid she would wake up help around the farm and eat her meals and go to school. She was just your average farm girl until one day luchadores came to town!

It was the first time María had even seen wrestling before! The experience awe inspired her as she saw these talented warriors flying through the air! She wanted to be like them she wanted to be a luchador! One problem… Her body was the polar opposite of them… They were slim and agile, she was bulky and strong! So her dream would be just that…. A dream.

Her life stayed the same until she finally reached high school. Due to her muscular body the wrestling team wanted her to join them as their powerhouse! María at the time had no clue what the hell a Powerhouse was… Slowly but surely she would grasp the style tho.

Her wrestling career wasn’t an easy one. Due to the lack of female wrestlers, María had to wrestle males for more of her early career causing a lot of losses as she learned on the job. Eventually she started winning more than losing, and started learning other styles to become a more well rounded wrestler. After become the Mexican Wrestling champion. María caught the attention of the AFW for their Tension league.

María is an expert farmer! She grows her own vegetables in her apartment.

Love horses and wants to learn how to ride one, someday.

Stranger In A foreign land: