Strategy: Use a balance of strikes and flashy take-downs to wear his opponent out and finish with either a power move or submission.

Preferred Attacks: Powerful strikes with a mixture of DDTs and neck breakers, loves to use his surfboard submission whenever viable.

Flaws: Has a bad habit of freaking out while in submission holds due to his . The very definition of a glass cannon Ashton doesn’t know a lot in terms of defense. easily flustered and embarrassed against female opponents.

knows how to take a beating, he'll still fight even when seriously injured.
Strength:

can dish out some damage but isn't going to be suplexing people bigger than him.
Speed:

decent speed but nothing noteworthy.
Defense:

Still very much a student when it comes to technique.

- knows the basics but still has alot to learn.
Powerhouse:

-  knows alot of DDTs and neck breakers and is strong enough to lift light-weight opponents
Aerial:

- Knows how to do a backflip...that's about it.
Counters:

- can counter most strikes but still inept when it comes to getting out of submissions.

Physical Appearance: Due to strict training regimen his body is very well toned and muscular has a very large scar across his back he has hazel eyes and silver hair he purposely keep short so his opponents don't pull his hair.
Casual attire:

Ring Attire minus the cape 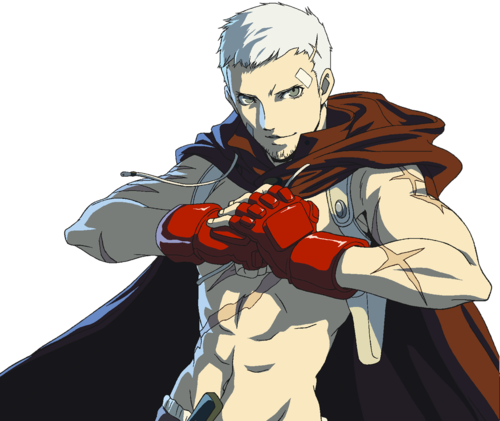 Personality: Timid but earnest and has a viscous temper when provoked. Very naïve his kind gestures are often mistaken for flirting. Always a martyr for punishment and very stubborn he'll keep fighting even to the point of injuring himself. Outside the ring Ashton often aloof and very skittish around women but will lighten up when he’s comfortable.

Finishing Moves
Picture Perfect: (Surfboard stretch submission) Ashton stands over his fallen opponent and from behind grabs ahold of his opponents wrists and locks up their legs lifting them up to the air while increasing the pressure on the arms and legs. Ashton is still learning to perfect this move so he’s prone to error.

Palette Knife Hook: (knockout punch) lifting his fist into the air to show off to the crowd Ashton delivers a vicious left hook to his opponent knocking them to the ground.

Pendulum Kick: leaning against the turnbuckle he taunts his opponent into running towards him quickly Ashton slides under the top rope and swings on it with momentum to deliver a hard kick to his opponent's head

History The last person you would expect to become a wrestler coming from family thespians and painters.  Aston developed an interested in wrestling after hanging out at his local gym after school looking for subjects for his drawing. He would watch Semiprofessional wrestlers would train and spar and would often get asked to draw exaggerated versions of the wrestlers for promo material. He was hooked on wrestling (no pun intended) after a fellow student cornered him outside the gym one day and beat up Ashton and started ripping up his beloved sketchbook.

In a fit of rage Ashton delivered a devastating left hook to the bully’s jaw laying him out in one blow. Shaken by this experience he became obsessed with getting stronger and started taking lessons at the gym. Ashton discovered he had a natural talent for wrestling and started binge watching it reading about it anything he could get his hands on. After developing an impressive win/loss record he became the star attraction at the gym after beating his mentor in a match. Much to the chagrin of his “cultured” family Ashton decided to drop out college after seeing a flyer for the AFW at the gym. He was going to see how far he could go with his new found addiction.

Wrestling Attire: Red and Black wrestling trunks with matching red and black MMA gloves with black wrestling boots.
Fun Facts
He’s a professional level painter and artist when he isn’t wrestling he always on the lookout for subjects to paint.
He’s left handed
He secretly likes to read shoujo manga although he’ll try to keep this secret till the grave.
The very definition of a bookworm Ashton will read anything he’ll get his hands on regardless of genre.

Goal in the AFW: To get as many wins under his belt as possible in the ring while trying to make as many friends outside the ring.

Likes:
Anything to do with art
Improving his wrestling technique
Ballroom dancing
Theater
"Nice" girls

Dislikes:
Being treated like an idiot
Bullies
When people pet his hair.

Losses: : Lost his debut match against Yuki Nakamura after getting hit with her white lotus finisher.

I'd advise break up the history into spaced paragraphs so that its not just one wall of text. But other than that he is accepted and you can begin playing ^_^
_________________
The new and improved: Kelsea's Karacters