» Lydia Donelle The Serpetine Seducer
by Bare Today at 11:50 am

» To Wrangle a Reaper: Maria Castillo vs Liz Page
by SleeperAgent94 Today at 8:40 am

[size=150]History:[/size]
"I was born in Massachusetts and raised in Rhode Island. My childhood was pretty normal, though I will admit that I got a little depressed, sometimesâ€”I was never goth, or anything of that sort, but let's just say that I had a rather bleak outlook on life for a while there. My parents were both venture capitalists, working long hours, leaving me by myself at home. They didn't believe in nanniesâ€”they thought that parents should raise their own children. I wish they would have raised me.

Well, as you might have surmised, my parents and I had a bit of a rocky relationship. That's one of the reasons which they sent me off to boarding school. Yes, for the last four years, I've been living at a small girl's school in upstate Vermont. It's pretty dreary thereâ€”sometimes I felt like the sky is clouded over for weeks, even when there's no chance of rain.

I only got into one true fight while I was there. I had been at that boarding school for all of five days when one of the other girls tried to steal some stuff from my room. Obviously, I told her to keep the fuck away from my stuff. She left, but cornered me in the bathroom later that night, when almost everyone else was asleep. I had never thrown a single punch in my life, but I really had no choice but to fight back.

The fight lasted about half an hour, and even though I won, I had a black eye and plenty of other bruises to hide. From that point on, I kept in shape, and I always felt on edge, itching for a fightâ€”first with that same girl who picked a fight with me the first time, then, after she left the school, with anyone who gave me a dirty look. I never did fight again, though. At least, I never had a serious fight again.

My senior year, I applied to several colleges and universities, but I deferred acceptance for a year. When I graduated, I got a full-time job and moved back in with my parents in Providence. That's when I started dating Brandy, my first real girlfriend. She showed me a softer side of fightingâ€”wrestling in bed, humiliation tactics like spanking and tickling...the sort of stuff I never would have thought of doing back at boarding school. I enjoyed the time I was together with Brandy. For four months we were together, and every time we went back to her apartment for some intimate time, we wrestled.

Well, after Brandy and I broke up, I felt listless. I felt lost. I needed an outlet for all of the confusing feelings which were welling up inside of me. I wanted to wrestle again, like we didâ€”gently, playfully, and making up with each other in the sweetest way afterwards. And, thanks to some channel surfing I was doing one day after work, I knew just where to go to find that."

[size=150]Personality:[/size]
Claire has an insatiable need for physical contact, loving to get up close and personal with a girl and challenge her, physically and sexually. Despite this urge, she is actually a very reserved, introverted person. When she isn't wrestling or making love, she prefers to be alone. People have called her names like "goth" and "emo," but she has never identified with either of those groups. She personally believes that she is a group unto herself.

Claire is an avid reader, and can finish a single paperback novel in one lonely night. She has a bleak outlook on life, but that doesn't stop her from enjoying herself. But, above all else, one word can describe Claire better than any other: complicated.

[size=150]Fighting Style:[/size]
Claire is not properly trained in wrestling, but has experience with both catfighting and kawaii-style matches. Despite this, she has committed to memory a few holds, and is fairly confident that she could handle herself in a standard wrestling match.

Her ideal match, however, would not necessarily involve holds at all: it would involve smothering, wedgies, and any other sort of softcore techniques which could be used to humiliate, inflict pain upon, or pleasure an opponent. 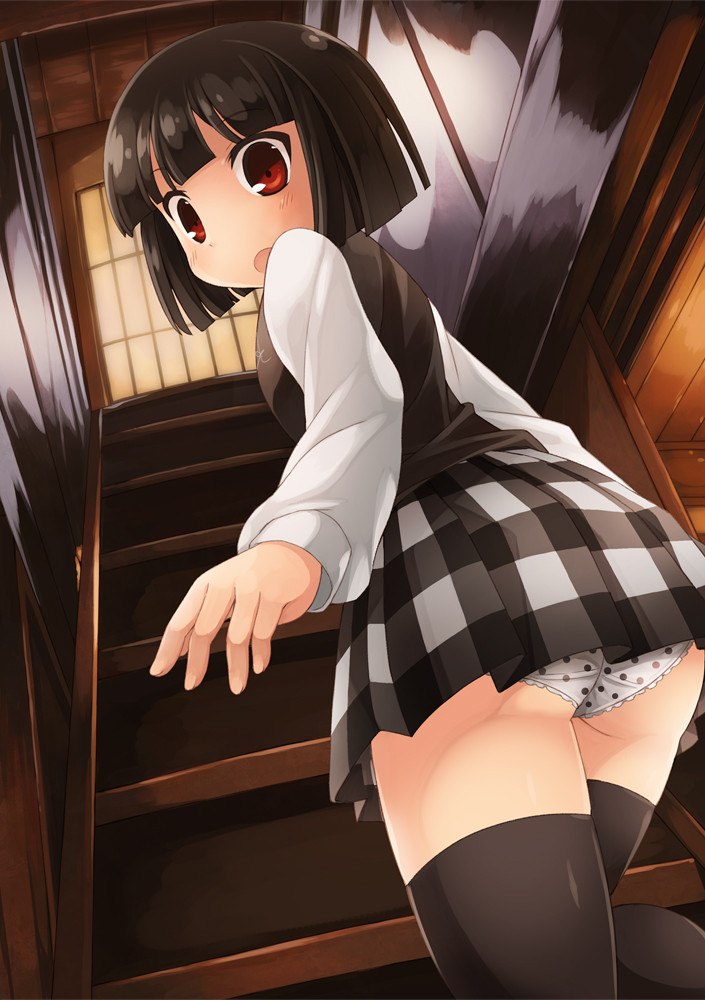 "My room is up this way. I've got some great books in there I could show you. After that, we couldâ€”hey, are you looking up my skirt!?"

[size=150]Fun Facts:[/size]
- Claire's favorite novel is The Stranger, by Albert Camus. While she has difficulty explaining it, the book spoke to her on a deep, personal level.

- Though Claire enjoys working out, she rarely visits the gym. She works out alone in her room, totally naked.

- She claims to be a vegetarian, but does, in fact, eat meat, when she believes no one is watching.

- On a similar note, Claire claims her favorite food is a fruit salad, but it is actually a strip steak, cooked medium rare.

- Claire had her first sexual experience in the eighth grade. A girl at her middle school reached up her skirt and fondled her, but Claire got away and ran home, crying.

- Her favorite pair of panties are white with black polka dots.