Search
Latest topics
» Maria Fernanda vs. Suzumi Ishikawa
by HighFly Today at 10:04 am

» Kyoko vs Milana. an Endurance of Abs
by Daaharu Today at 6:24 am

Wrestling Style:  A hybrid of grappling mixed with punches.

Combat Attitude: When Nikki's in the ring, the bedroom or any other place where she can roll around with other girls the first thing you'll see on her is a great big smile.  Nikki loves to wrestle and grapple,and she'll often tell her opponent that in the middle of a match.  It doesn't matter if she's winning or losing, it's all a fun game to her.

Offensive Strategy:Nikki will more than often speed into a fight, and her speed is nothing to laugh at.  It doesn't matter the opponents size, skill or reputation.  To Nikki they're all someone she could have fun fighting with.  Being a grappler Nikki will get as close as possible and most likely go for the chokeholds she so loves to apply.

Submission Holds: While may not looking like much Nikki is a genius when it comes to applying technical and immobilizing submission locks, ones that often incorporate a devastating choke.  Once Nikki is locked in it is very hard to dislodge, and any who fail will more than likely be taking a nap before they even knew what happened.

Finishers: Down to Rest - Basically a sitting triangle choke.  Nikki will trap her oppoanant in a regular triangle choke, and the quickly roll them onto their back, bringing her with them so she'll be in a variation of the schoolgirl pin.  With her legs still wrapped around their neck and one of their arms useless, all Nikki has to do it sit there until her opponant passes out.  More than often she'll taunt her opponant about how she's not even trying.

Thigh Throne - nikki will put her foe on the turnbuckle in a tree of woe position, step over them, and then shove their head between her legs in a standing front headscissor.  She'll then simply lean back against her  opponant's body, much like a throne, and wait for them to pass out between her thighs.

High Thigh Throne - A variation of the Thigh Throne when she feels her opponant is special, or simply too tall for the turnbuckles.  She'll tie her opponant's feet up in the top ropes, and hang them upside down outside the ring.  She'll then crawl up her opponant's body, and apply the front headscissor so she hung off the ground entirely on her opponanat's throat.  With so much pressure being applied to their head, this an almost garunteed knockout in a manner of seconds. 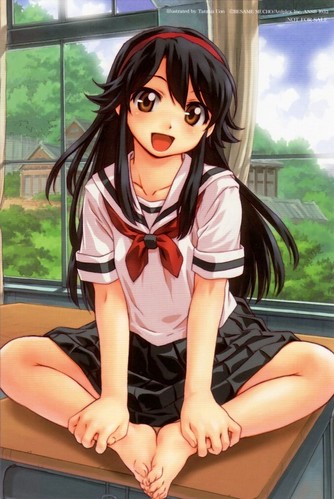 Personality:  Nikki is a happy go lucky girl through and through.  She somehow always manages to find a bright side to her life, so there's very little that can sour her ever present good mood.  She's also quite fearless.  Nikki could be facing the biggest and meanest opponant in the AFW and she'll just have the need to comment on how the weather must look up there.

Past:  Nikki grew up as a cheerful young lady in a normal home with a normal family in a normal town.  Her cheery personality earned her many friends, so she was quite popular in her school days.  While she was still in elementary school a friend sugested she join the self-defense class she was also taking, and Nikki heartily agreed.  When she joined she quickly realized (as did her opponants) that she had a real knack for it.  She was creative in her grapples, creating moves that surprised both her  and her teachers.  For years she nurtured this talent, swiftly rising to the top of her class as the most skilled fighter.  She even earned a nickname from one of her friends.  'Nikki Knockout', since that's the way she liked to end her  matches.  Despite her reputation, Nikki's personaility never changed, and was still the same cheerful girl she always was.

She joined the AFW purely on the suggestion of a friend, who said she could be a real contender there.  And so after saying goodbye to her freinds and family she traveled to the AFW to make the name Nikki 'Knockout' known worldwide...


Fun Facts
- As per her nickname, Nikki likes to end all her matches with knockouts.  She especially likes watching as they pass out, saying it makes her feel all 'tingly inside!'
- After winning with a knockout, Nikki will use a black permanent marker to write on her unconscious opponant so they'll always remember her.  Whatshe writes depends on the situation.

TAG TEAMS
The Ancestors of Isis

TAG TEAMS
The Ancestors of Isis