Unbelievable, this is unbelievable. Himiko thought to herself, she couldn't believe she just got into another match right after the last one, but this is just a normal thing to expect in AFW, isn't it? Himiko looked at herself in the mirror, carefully adjusting her appearance for her debut in AFW. Light and deft outfit? Check. Cute hat? Check. Shining fake wings? Check. Finally finished the preparation, Himiko walked into the arena. Hearing the cheering from the audiences, she knew this was going to be another fun match. Himiko would briskly run down the path and jumped up to climb into the ring with her agility, and she would turn around and waited in her corner. Himiko stared at the path her opponent was going to walk down while laying against the post, she took a deep breath, impatiently waiting for the revealing of who she would face tonight. The butterflies in Dallas' stomach ceaselessly fluttered about as she finished putting on her outfit, and with good reason considering the country cowgirl was more nervous than a long-tailed cat in a rocking chair factory. Bein' yanked out of trainin' classes for her debut match would have gotten her anxious regardless, and this was before the exact details of the match were imparted. S'not like Dallas was unaccustomed to playin' a lil grab ass here or there in other wrestling leagues back home, but she had a particular feelin' this one was gonna be a horse of a different color. Luckily for her though, she's known how to tame wild filly's ever since she could twirl her first lasso. 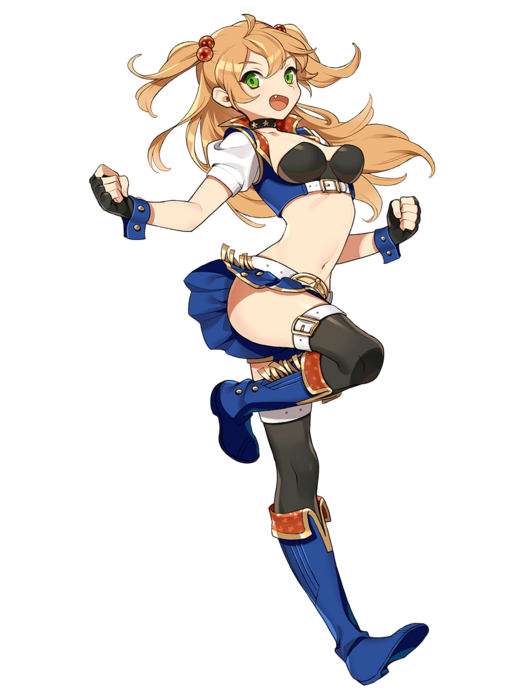 The guitar twangs of Dallas' theme started playing alongside a setting sun being showcased on the Titan-tron with horses galloping along the countryside, the country gal striding out from behind the curtains and posing at the top of the ramp. Mock holstering her finger guns before confidently sashaying down the ramp while high-fiving several fans along the way. Entering through the ring ropes after walking up the steps, but balking somewhat when setting eyes on Himiko, approaching the middle of the ring to chat with a beaming smile. "Tarnation!!! Cutie like you's gotta be double backboned to wear an outfit that revealin'. Bout the only thing I can't see is yer modesty. Wings are right spiffy though!!!"
_________________

With the sound of guitar suddenly played and cheering of the crowd, Himiko knew her opponent tonight has made the arrival. From a distance, she could see a figure approaching closer and closer, although it was quite hard to focus the sight to see her opponent's appearance clearly from far away, but she could still figure out some characteristic, that girl seemed got long black hair, with pretty skin like many of the wrestlers she met... and oh and she seemed very energic. All those thoughts processed in Himiko's mind, as the figure finally climbed up into the ring, Himiko could take a clear inspect to her opponent. Pretty close to what Himiko estimated, this girl, Dallas, if she remembered correctly, was quite a chick, with her attire resembling the style of cow girl, her slim body and pretty face made Himiko even jealous for a moment, but she knew she was about to play with that perfect body soon.

Himiko would approach to the middle of the ring as her opponent does. On the way she could hear her opponent's comments on her appearance, calling her cute, mentioning her outfit, and of course her specially designed wings. Although Himiko couldn't figure out if that was mocking or actually praising since she had met many opponents with similar comments on her before, but Himiko would still stick out her tongue and made a face, "Hehe thank you miss, I guess. I like your outfit too, I just not sure if that it will still belong to you later, cowgirl!" Himiko replied with a taunting tone. As she walking her way to the middle, she would thought in her mind on what her opponent will do next, and what she would do to counter it, she was confident she was ready to have fun with the girl in front of her.
_________________
No-joke Rosters

Dallas preferred exchanging pleasantries like this before any of her matches, even ones where in all likelihood one lady was gonna be headin' home battered, beaten, embarrassed, and still rememberin' the taste of the other gals lips. Well, lip's iffin' they're lucky. Dallas has had to share locker-rooms with ladies who done whupped her keister and the other way around, but still wound up kicking back a few cold ones at the local waterin' hole. Harborin' animosity and getting your feathers all ruffled was jus' somethin' Dallas tended to abstain from if she could given her chipper personality and sunshine demeanor. Not that she was intending to be jobber fodder either, the competitive cowgirl fully intent on makin' sure she'd wind up with the win tonight. Even if it meant bringing Himiko over her knee and spankin' that bare backside until it was branded as bright red as those crimson colored peepers of hers.

"Aww, bless yer heart darlin'. Gettin' these britches off is gonna be tougher than ya think, but I figure if yer brave enough to wear that outfit, yer brave enough to try an' get in my dainty unmentionables~..." Dallas teased back with a wink and brightened smirk, her earlier *cute* compliment towards Himiko not bein' a slip of the tongue as the cowgirl couldn't but find the little nymph downright adorable at times. Still, it was time to saddle up and get to work as Dally eagerly approached the middle of the ring around the same time as her adversary for the night. The brawlin' texan adopting a grappling stance as if she were attempting to lock-up with the scantily clad pixie, but once close enough a glimmer of light would shine in her eyes as she instead started sprinting forward with a ducked down posture. Attempting to drive her shoulder into Himiko's midsection and snatch her arms around her petite waist, and if successful would try to bumrush Himi back first into the turnbuckle.
_________________

"Oh lady, I really hope you will be as tough as your words!" Himiko was starting to get annoyed as the women opposite of her made fun of her outfit once again. She knew she once said in the past that was for the mobility of her fighting style, but she admitted that recently she begun to think if her outfit was too exaggerated. But this was not time for thinking something like that, as she needed to focus on much more important things now.

Himiko almost laughed as her opponent was either arrogant or dumb enough to being so obvious on what her next move is, as the cowgirl raised her hand for a grappling stance, she obviously knew how to counter that. "You seriously think I will fall for that... Errr?" However, as she approached closer, she was caught in surprise when Dallas suddenly changed her stance and dashed forward, dived into her belly and hugged her waist. "Ouch! Hey... ugh!" All of those happened so fast even Himiko herself found hard to keep up, in which when her foe start pushing her backwards, she barely can do anything to resist. "Ah!" Himiko let out of a yelp when she felt her back hit right onto the turnbuckle, "Let go!" Being restricted in the corner, Himko tried to push Dallas's shoulder to escape from the situation, but her weak physical strength just gave her more trouble to do anything effective.
_________________
No-joke Rosters