It had been a while since she had been in the ring. After deciding to take a brief hiatus to rest and relax herself, the Zero Fighter Reiko Hinomoto was ready to return to where she belonged! Inside the squared circle and in front of thousands of amazing fans. It was times like these that made the dark haired girl feel nostalgic. Remembering her time in Rumble Roses before the leagues fall and closing. But she was happy with the opportunity that AFW gave her. Even if some of the matches they had were a little… strange. 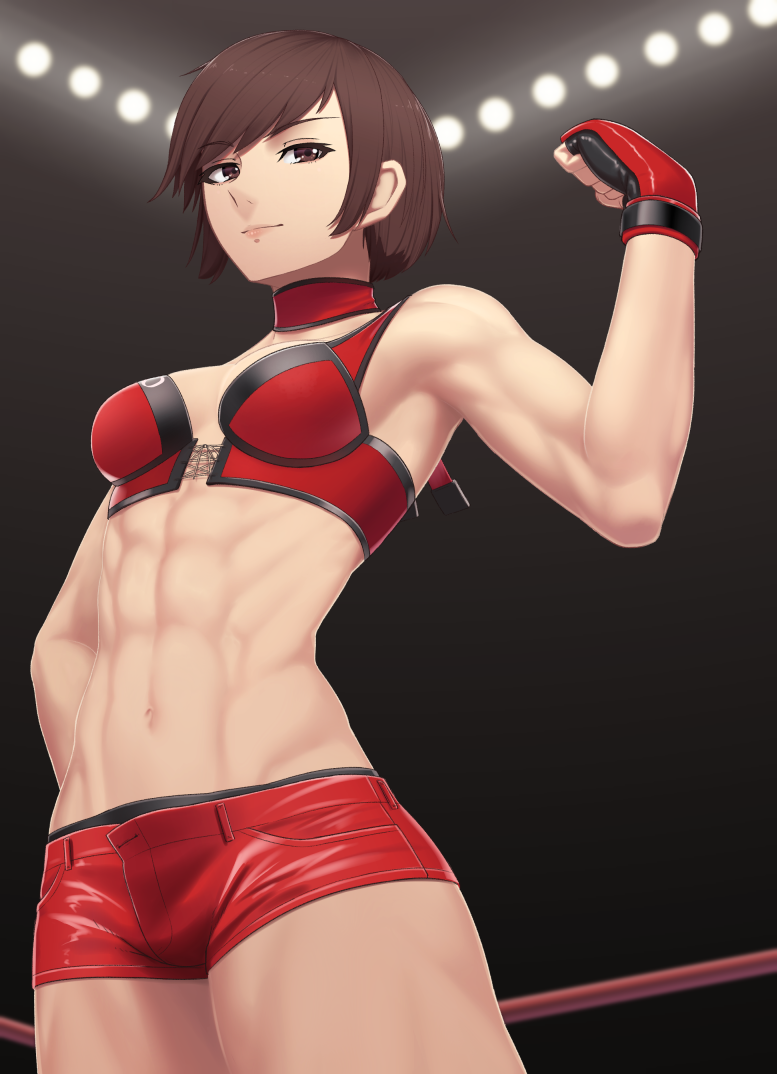 Finally, a knock reverberated from her door. Looks like it was showtime. So taking a moment to psych herself up one last time, Reiko would leave the locker room and make her way to the gorilla position. Bouncing on the balls of her feet, Reiko would hear her theme begin to play and a flash of red pyrotechnics. Stepping through the curtain she was met with a roar of thunderous applause. With a smile on her face, Reiko would make her way to the ring and slip in between the top and middle ropes. Doing a few final stretches, the zero fighter would step into her corner and wait for whoever her opponent was.
_________________
RINGROPES RINGROSTER
https://www.afwrpg.com/t20768-ringropes-ringroster#552569

Idly sitting by on the sidelines was never quite Johnny's preference when it came to exploring new capitalistic ventures. But considering his gloved hands were initially tied when it came to when and against whom he'd be booked against in this wrestling league, he figured may as well get the lay of the land around AFW while biding his time. Scouting for premier talent from the shadows and eyeing just who could make him the most money-he means, who he would be of the most benefit towards from having his managerial skills at their disposal. Upon his eagle-eyed scanning of both Friction and Tensions roster listings, there was one particular flower who caught his eye almost immediately. Or perhaps he should say, one rose. Opportunities abounded when he discovered this wayward wrestling talent's name, and after greasing a few wheels and paying off the right people among AFW's booking personnel, Johnny just so happened to have himself scheduled with a match against just that specific crimson warrior.

Flashes of various casino themed iconography started being flashed across the gigantic screens above the entrance ramp as Johnny's theme started being played. Suits of cards and dice being rolled around as the dapper gambler appeared from behind the curtains with a snarky smile, masterfully twirling his cane around while waltzing towards the ring seemingly without a care in the world. Tipping his hat up to cast his emerald gaze at the Zero Fighter within the ring, entering through the ropes and handing off both his cane and bowler hat towards the referee as he approached the middle of the ring to strike up a casual chat with..."Reiko Hinomoto, I must have truly hit the jackpot to be matched up against you this fine day. Ah, excuse me...the name's Johnny Atlas, Talent Manager Extraordinaire. Now I know this may seem abrupt, by seeing as we don't have much time to chitchat now, what do you say we raise the stakes of this little scuffle of ours. Just with a friendly little bet I have in mind, is all~..."
_________________

Reiko could continue to do a few last minute warmups as she waited for her opponent to come out. Mind racing to think of whoever it was that set up this match with her. That was something that Reiko couldn’t get out of her head, it felt like she had been chosen specifically for this matchup, and while that wasn’t all that unusual to her thanks to her popularity not only from her Rumble Roses career but in other media as well. But despite that, Reiko couldn’t help but be suspicious when she learned that not only was she facing off against a man, but that she wouldn’t be knowing who the man was until she met him in the squared circle.

Finally after a little while of waiting, the lights suddenly died down and were replaced with lights featuring the various suits of a card deck. Music that one would hear in a casino would ring out across the arena and finally, Reiko would catch a glimpse of her opponent…and he wasn’t at all what she was expecting. She expected a large muscular man that would be ready to tear her limb from limb. Not a pale, lean ginger in shirt straps. She was even more confused when he entered the ring and after an overly enthusiastic greeting, offered a sort of bet for their match. A request that Reiko was too curious to not question. “It’s nice to meet you Mr. Atlas. Just what kind of bet are we talking about?” She asked.
_________________
RINGROPES RINGROSTER
https://www.afwrpg.com/t20768-ringropes-ringroster#552569