Search
Latest topics
» New Beginnings...
by Deskfan45 Today at 2:14 am

» Belly Bonding Time
by Daaharu Today at 2:12 am

» Clover Rose vs Mary Clarison!
by Jstruggs716 Yesterday at 8:19 pm

Himiko vs Nagatoro - There is Always a Bully and a Bullied

Himiko vs Nagatoro - There is Always a Bully and a Bullied

Unbelievable, this is unbelievable. Himiko thought to herself, she couldn't believe she just got into another hentai match right after the last one, but this is just a normal thing to expect in AFW, isn't it? Himiko looked at herself in the mirror, carefully adjusting her appearance for her debut in AFW. Light and deft outfit? Check. Cute hat? Check. Shining fake wings? Check. Finally finished the preparation, Himiko walked into the arena. Hearing the cheering from the audiences, she knew this was going to be another fun match. Himiko would briskly run down the path and jumped up to climb into the ring with her agility, and she would turn around and waited in her corner. Himiko stared at the path her opponent was going to walk down while laying against the post, she took a deep breath, impatiently waiting for the revealing of who she would face tonight. Nagatoro waited backstage. She was excited. Tonight was her debut. Of course, with her being a part of the notorious house of heels, she had gotten more than a few chances to work over some jobbers in the gym and backstage but tonight, this was her first, real debut.

She would check herself out in the mirror. She was wearing a pink and frilly bikini that would get the crowd and hopefully her opponent excited. She would strike a few poses to see how she looked. She liked what she saw.

what she saw in the mirror: 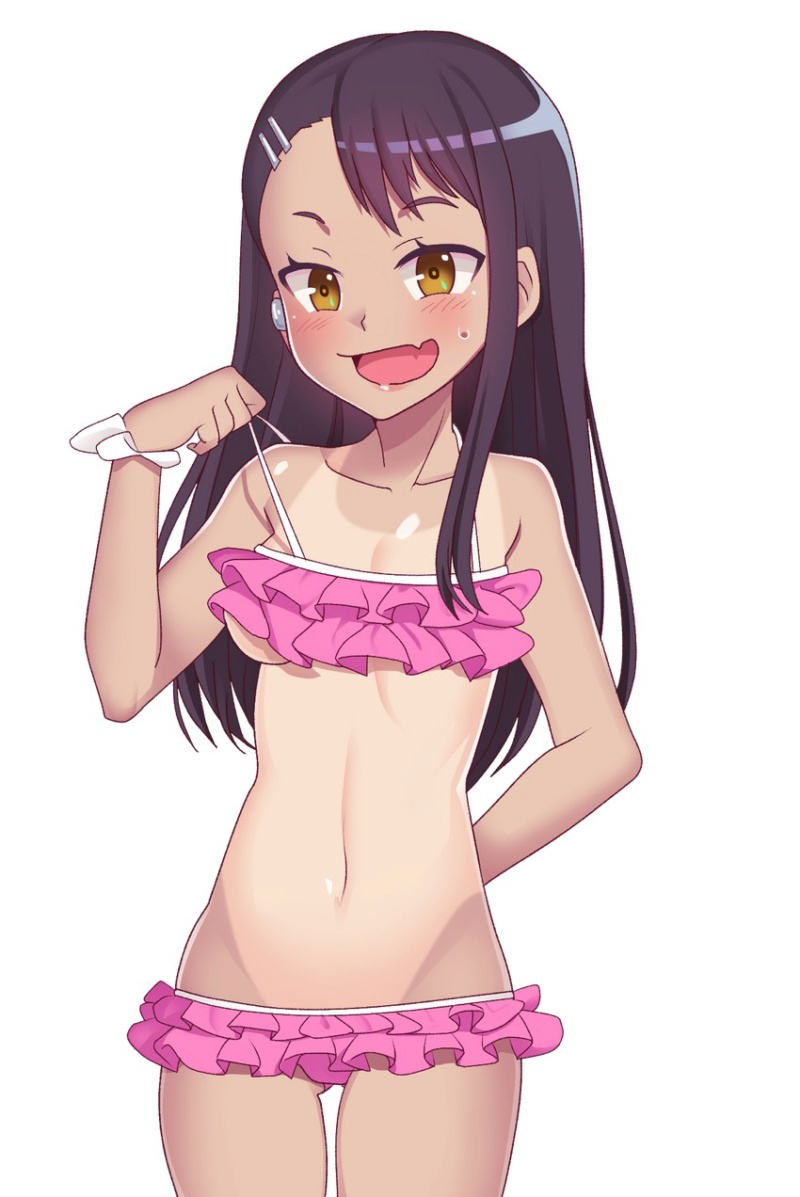 Nagatoro would be notified that it was her turn to make her entrance. She would go towards the curtains, take a deep breath and strut out to her music. She would stand at the top of the entrance ramp and flip off the crowd, giving them two middle fingers, getting a loud cheer from the crowd as well as some boos from the fans that were not fond of heels. She would then strut her way down the ramp, with both middle fingers up, taking in both sides of the crowd.

Nagatoro would make it to the ring and climb inside. She hadn't seen her opponent until now and she was pleasantly surprised. This cute blonde girl was even smaller than her. It was rare that Nagatoro found opponents that were the same size and ever rarer if they were smaller. An evil grin would grow on her face as she licked her lips. This petite blonde looked delicious, especially in her cute skimpy outfit.

Nagatoro would finally break the silence as she walked towards the center of the ring. "I'm gonna have fun making you my play toy!" She would tease as she waited to see if her opponent would join her in the middle.
_________________
Shanecawfs heels and jobbers of your dreams

With the music suddenly played and cheering of the crowd, Himiko knew her opponent tonight has made the arrival. From a distance, she could see a figure apporaching closer and closer, although it was quite hard to focus the sight to see her opponent's appearance clearly from far away, but she could still figure out some characteristic, that girl seemed got long black hair, skin a little darker than other wrestlers she met, and she looked quite short too... wait, is she giving middle fingers to the audiences? Oh she is definitely going to be more than a formal foe to fight... All those thoughts processed in Himiko's mind, as the figure finally climbed up into the ring, Himiko could take a clear inspect to her opponent. Pretty close to what Himiko estimated, this girl, Nagatoro if she remembered correctly, was just about as small as Himiko herself, the pink little bikini made this girl looked even more adorable. Although there may still be slight difference in height, but Himiko was still got some relief in her mind, because as someone whose small body size would always be potentially disadvantage among other wrestlers, Himiko was glad she finally got match with someone didn't seemed outclass her in this term.

Of course, Himiko also knew her opponent had some "special" attitude when she saw her giving middle fingers, and that was being further confirmed when she saw Nagatoro grin towards her and licked her lips. "Eww..." Himiko whispered to herself as she noticed this action of her foe, it was minor but enough to make Himiko alert about what her opponent may do during the match. Upon hearing the teasing from Nagatoro who begun walking towards the middle of the ring, Himiko would stick out of her tongue and made a face towards the black hair and respond: "Ohh we will see about that little one!" The blonde would maintain her taunting tone as she also started approaching towards middle of the ring. Despite her sarcasm attitude, Himiko still knew she should watch out about her opponent's next move once they got close enough.
_________________
No-joke Rosters