The Alley Scrap of Lust - MIAO (D) Vs. Skylar Jones

The Alley Scrap of Lust - MIAO (D) Vs. Skylar Jones


The night was young, and as such set the stage for another debutante on the substantially huge roster of AFW. The individual in question was a youthful performer named Aimi Wakabayashi, but soon, she'll be known to the rest of Kyoto's faithful viewers as MIAO. Fastening the metal pads to her shoulder, she sat in the locker room with the other wrestlers, just adjusting her gear and all, so that nothing can easily get ripped apart. All precautions for the current match type that will go down, and one she's a newbie to. To say the least, she was excited about the whole ordeal.

After slipping on her long latex gloves which matched with the rest of her outfit, she then stood up from the bench she was sitting on, hands on hips, looking particularly confident as she strut her way to the entrance stage, the long tail connected to her leotard trailing from behind as she awaited her music.

Outside and in the arena, upbeat music began to play, with a purple haired girl soon exiting the arena looking rather giddy! Making some cat related gestures to the crowd in a playful manner, she then began to stride down the arena, hyping up the crowd that gave some positive reception to the burgeoning new-face that showed up for the promotion. Approaching the center stage that is the ring, she grabbed hold of the turnbuckle, climbing up it thereafter with both feet now on the apron. She then grasped the top rope, leaping upwards to plant her soles on top of it, before releasing soon after to launch herself to the center of the ring, soon landing on the mat with a tactical roll! Standing up afterwards, she struck one more pose before sending herself off to her corner, waiting for her concurrent opponent. 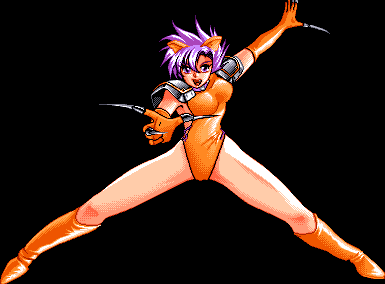 *Claws not included. She's not there to hurt people for now...

"And her opponent, weighing in at 162 pounds, from Perry, Iowa, the Brawling Puppet, SKYLARRRRRR JOOONES!!!"

Skylar burst out of the curtain, her only clothing a pair of torn jeans. Her perky, C cup breasts were proudly on display as she made her way down the ramp, greeted with the usual mix of cheers and jeers. Approaching the ring, she grabbed hold of the top rope, and jumped over into the ring, now face to face with Miao. "Heyyy, kitty." She purred, wearing a mischievous grin as she circled her opponent.
_________________
Skylar Jones: https://www.afwrpg.com/t21672-skylar-jones

MIAO, upon seeing the sight that had befallen upon her as she stared down her opponent, had a bead of sweat trail down her head, and a tinge of red appearing on her cheeks momentarily after the fact. Letting out a gulp, she then shakes her head, regaining composure into her confident demeanor. Placing her hands on her hips, she began to speak.

"Hello! No speak english! But you go downtown, nya~"

Despite her limited understanding of the language her opponent spoke, she thought she got her point across, before she pointed down on the mat canvas, alongside forming her other hand into a V-shape, sticking her tongue out and in-between the V. An easily provocative gesture to make. While all of that was said and done the ref was there, mostly to keep things in check. Pointing over to the announcer's table, the bell rang, sounding the start of the match!

With this in mind, MIAO got into a stance, arms outstretched to anticipate any potential attack from her opponent. She has a lot to prove now, to the audience live and at home to see if she's got what it takes and isn't just all character.

Skylar snickered at her opponent's banter, cracking her knuckles while tilting her head with a seductive smile. "No need for English. You won't be doing much talkin' while I'm fucking your brains out anyway~!" She grinned, licking her lips. She was gonna make this pussy cat mewl~!

When the bell rang, the brunette rushed forward, grabbing MIAO by her purple hair. She shoved their lips together, forcing the feline into a deep, sloppy kiss! If she manages to keep hold of the girl, her free right hand begins to caress her body. She started at the bottom of her leotard, tugging to give her a slight wedgie, before letting her fingers slowly crawl up her toned thighs and ass, and arriving at the top to give her boob a good squeeze! Then, she'd form a fist, throwing a hard punch into MIAO's stomach!
_________________
Skylar Jones: https://www.afwrpg.com/t21672-skylar-jones