» Yusha Sento vs. Lauren Fredericks
by HighFly Today at 5:43 am

Win by knockout via smother

A silence came over the crowd as they awaited the first match of the night. Two newbies were having their debuts, one a somewhat well known idol, the second a cute looking peppy cheerleader. The match was billed as a smother match, so nobody in the crowd expected too much wrestling technique to be shown. They expected a nice soft fight between two cute girls who didn't have much experience or ability.

Lights began flashing as Ayame's music started playing over the speakers. The girl was nowhere to be seen though, making many in the crowd wonder if she had chickened out. Then came a bright flash and a huge burst of smoke. Standing right in the middle of the stage, as if she had just appeared out of thin air, was the slender form of a shadowy figure. With a wave of her hands, a huge gust of wind blew away all the smoke obscuring her, revealing Ayame Hamaguchi, the Kunoichi Idol! 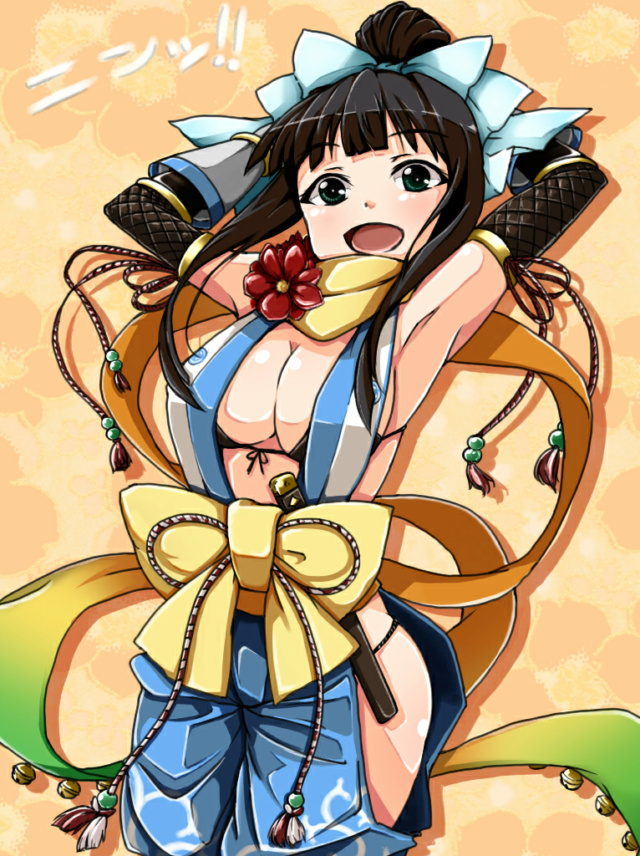 Arriving in a puff of smoke was only half of her entrance though, as she was more than just a ninja, she was also an idol! With a microphone in hand, Ayame sang along to her entrance song, putting on a show that got the entire crowd cheering and clapping along. After the short song ended, the ninja idol dashed down the ramp, and with a single acrobatic leap jumped up and over the top ropes, landing lightly on her feet. She bowed to the crowd, then straightened up and gave everyone a big wave.

Arianne leaned against the wall, stretching her arms up over her head and giving all of the stagehands and other staff a good look at her taut abs and generous underboob as she finished up her pre-match stretches. For someone debuting that night, she didn't look particularly nervous, instead sporting a broad grin as she bounced, jiggling in all the right places as she hyped herself up. She knew that everyone she knew in Montreal - especially her old squad - had been ecstatic to see her go, but little did they know she'd traded up!

She couldn't help but let out a little snicker as her opponent sang along to her own theme music. "Extra, much?" She mocked her opponent quietly as she prepared to make her own entrance. Finally, mercifully, her opponent's entrance ended. She smirked and blew one particularly nervous-looking stagehand a kiss as Slumber Party began pulsing over the sound system. She strutted down the ramp, twining her fingers together and popping her hips to each side, showing off her heart-shaped bottom as her skirt flipped up. She continued making her way down to the ring, hopping up onto the apron and grabbing the ropes, leaning back butt-first and letting her cheeks peek out from under her short skirt before she ducked her way between the ropes. 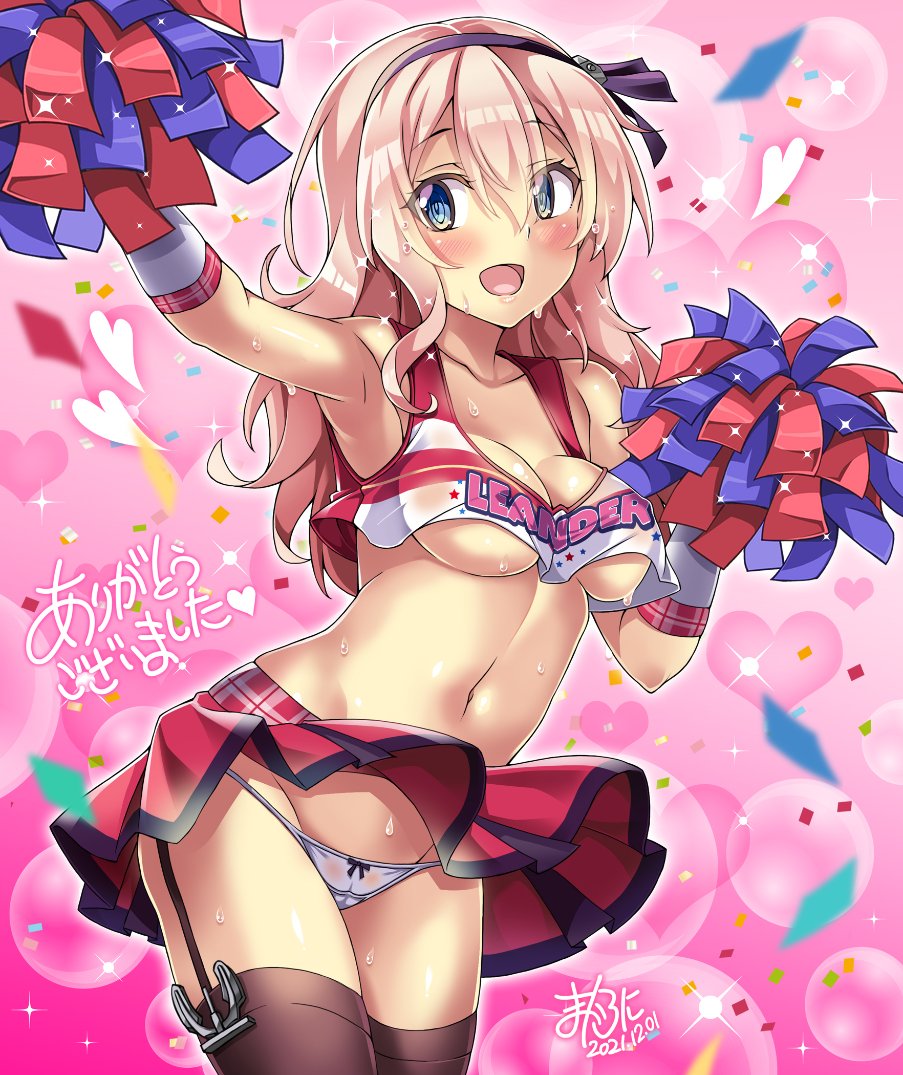 "Awwww I love your little outfit, babe! I think it's so brave of you to leave the house like that." She giggled and winked at her opponent, tone and demeanor contrasting her venomous words as she called across the ring to her. She leaned back against her corner, watching her opponent with a critical eye even as the sweet smile never left her face. "So like, are you even from here, honey? Because I know we're in Japan and all, but like, you don't have to dress the part, y'know?"
_________________
The House of Divas

Ayame bounced lightly on her feet, keeping her body warmed up as she awaited her opponent's entrance. She didn't have to wait long, as her opponent's music began playing over the speakers. A cute-looking blonde in a very skimpy cheerleader outfit showed up on the stage, striking a few poses that showed off her body before heading down the ramp. Like any good ninja, Ayame took the time to size her opponent up. Her outfit did little to hide her fit body, and the way she moved demonstrated her athleticism. It made Ayame excited to face off against an opponent that looked like she could keep up!

The good natured ninja idol was about to give her opponent a customary polite greeting when Arianne spoke first. Her tone was light and friendly, but those words dripped with a venom that took Ayame aback. The cheerleader's gaze showed no friendliness as her blue eyes pierced Ayame's body. She kept up her composure though, putting a bright smile on and continuing with her planned polite introduction.

"I am Ayame, kunoichi of the Hamaguchi clan," Ayame said, "As a ninja, I am dressed for the part. You look like you're a cheerleader, I hope you will be able to keep up in this fight!"

The idol was feeling quite confident. She stepped forward, raising a hand to give Arianne a chance for a fair shake before getting started.
_________________
The Party!

Arianne blinked rapidly, smiling with the patience of someone talking to someone vastly their intellectual inferior. She took a deep breath, eyes closing as she made a show of gathering her patience to answer. "Ohhh, you're one of those 'cosplayers' aren'cha? You doing like, the ninja cartoon, Nardo or something?" She buffed her nails against her skimpy top, glancing slyly up at Ayame with a giggle.

"As for me being a cheerleader, congratulations! I'm so impressed you figured that out all by yourself!" Arianne gave Ayame a round of applause as she walked forward to meet Ayame. "But you're a little off. I'm not a cheerleader. I'm the cheerleader. My squad took home the gold in every competition in Quebec while I was in charge." The bell rang, and instead of shaking the kunoichi's hand, Arianne grabbed it and tried to whip her opponent toward the ropes!
_________________
The House of Divas

Ayame could tell Adrienne was trying to get under her skin. Either that, or the girl really was just that obnoxious. Either way, it was better for her to be taken lightly. "Sure... I'm a cosplayer," Ayame said, suppressing her urge to roll her eyes. If Adrienne hadn't caught on that she was a true ninja, with real ninja skills and proper training, then she would once the fight got started.

"The cheerleader hm?" Ayame said, "That is quite impressive. I'm glad I'm facing such a competitor tonight!" The bell rang right as their hands touched. Adrienne got the first move, gripping Ayame's palm tightly as she whipped her arm out, throwing the ninja girl towards the ropes!

Ayame put up no resistance, making it seem like she was caught off guard. In truth though, she was simply going along with Adrienne's underhanded move. Once she reached the ropes, she spun around on the ball of her foot, leaning back into the ropes and using them to vault herself back at Adrienne at full speed.

"Take this!" Ayame yelled out as she leapt into the air. High flying suited her best, her training kicking in as she launched herself at Adrienne, hoping to catch the cheerleader before she realized what was happening. Ayame threw both her legs out, aiming a dropkick right at Adrienne's scantily-clad chest to try and knock her clean off her feet!
_________________
The Party!

Arianne grinned and clapped her hands. "I knew it! Sooo cool that you're not afraid to let your freak flag fly like that!" She snickered under her breath as Ayame expressed that she was glad to be 'facing such a competitor.' She watched as Ayame raced toward the ropes and bounced off. As the kunoichi jumped up for a dropkick, she tried to grab her opponent's ankles and, as she fell backward, move her legs so that her opponent's head would slam against the canvas.

Ayame fully expected her flying dropkick to catch Adrienne off guard. The girl was just a cheerleader after all, she almost certainly didn't have any fighting experience. So when Adrienne leaned back, making her dropkick hit nothing but air while simultaneously grabbing her ankles and stopping all her forward momentum, that came as a huge surprise to the ninja girl.

"Huh?" Ayame gasped as she fell downwards, her head dropping towards the mat! She threw her hands out, catching herself on her palms to keep her head from slamming against the mat. Bridging upwards, Ayame kicked her legs out hard to free them from Adrienne's grasp, her well-trained ab muscles tightening to flip her over backwards to land on her feet.

"Not bad, seems I underestimated you!" Ayame said as she landed in a crouching position. She wasn't about to let off her attack though, springing forward from her crouch to try and land a hard elbow-strike right against Adrienne's upper chest!
_________________
The Party!

Arianne raised an eyebrow as Ayame was able to flip herself up to her feet. She rolled her eyes and kipped up, grunting as she used the display of athleticism to recover. She watched her opponent appraisingly and cracked her knuckles. Then, Ayame pounced forward, elbow sinking into the cheerleader's ample chest! She grunted and wrapped her arms around the kunoichi's head, trying to pull the woman's face between her breasts as she fell to the canvas!
_________________
The House of Divas

Seeing Adrienne kip up in a smooth motion demonstrated to Ayame that her opponent was quite limber as well, though the ninja girl still thought her training gave her the advantage. The timing of her attack was perfect, as right when Adrienne got up, Ayame was upon her, the elbow strike smashing into the cheerleader's exposed upper chest. The blow knocked Adrienne off her feet again, but as she fell her arms wrapped around the back of the kunoichi's head, pulling her facefirst in between Adrienne's perky breasts!

"Mmmph!" Ayame gasped as she fell down with Adrienne. Her fall got cushioned by the cheerleader, though the impact was the least of Ayame's worries. Adrienne locked in a tight smother, her pillowy breasts cutting off all of Ayame's air and vision! The ninja girl realized that if she remained in this position for long she would be in big trouble.

Arianne giggled, stroking Ayame's hair in a mocking soothing gesture as she tried to lock her toned legs around the kunoichi's stomach to squeeze her while keeping the raven-haired woman's face buried between her considerable breasts. She grunted as Ayame started to try and get her feet under her, and started to try and roll so that her opponent ended up either next to or under her, wanting to keep the kunoichi under her control.

"I'm like, so generous right now, eh? You've probably never been this close to literal perfection before, and here I am giving you a face full!" She bit her lip, letting out another little giggle as she used her arms to squish her breasts against Ayame's face and rub them up and down to humiliate her opponent.

"Hey, don't worry about losing this fast, alright? I'll give you some of my special training and you'll never mess up a match again." Her voice got a bit darker at that. Then she shrugged and the sinister undertone was gone.