Search
Latest topics
» [Standard Match] Margarita Jorgensen vs Xiao La Rouge - With Fire In My Heart And Honor In My Soul
by Deus001 Today at 11:08 pm

Double Tag Teams Debut! The Stacy Twins vs The Owens Family! The Sisters vs The Married Couple!

Double Tag Teams Debut! The Stacy Twins vs The Owens Family! The Sisters vs The Married Couple!

"Are you ready Sarah?" Brittany asked as she puts the final touches to her attire. "You bet little sister." Sarah replied. "I'm not the little sister damn it! We were twins!" Brittany yelled out in angry and annoys while Sarah giggles. Brittany hated to be called the little sister since she and Sarah were twins and doesn't see neither of them being the oldest or youngest twin.

But soon Brittany's anger fade and a smile came to her face because she and Sarah were excited as they are going to make their debut in AFW any minute now against a fellow debuting tag team called The Owens Family after months of having their debut postponed at the last second.

They hears the ring announcer called out their names and their theme music:You Can Look (But You Can't Touch) by Kim Sozzi is playing around the arena and knew that was their cue as they began to walk from the gorilla position to the entrance ramp and received cheers from the fans. They would walk down the entrance ramp, giving high fives to the fans before reaching the ringside arena.

They climbed up the steel steps and entering the ring by through the middle rope. Once they were in the ring they walked to the center of the ring and waved to the fans while the fans waved back. 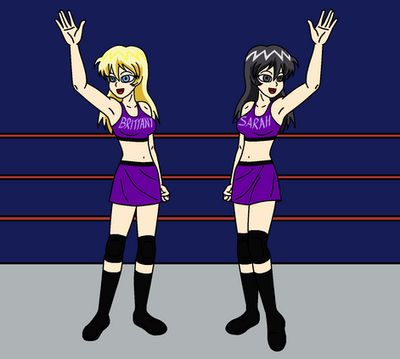 Rebecca and Shad were not exactly new faces on the AFW scene. But this was their first time going in together. Usually Rebecca did 9/10's of the matches and Shad just kinda peaked around the edges, causing mischief and trouble wherever he went. Today was different...no, there was still going to be mischief and trouble but today it was playing partner to strength and skill. It was was made them such an effective team even before they got married.

Rebecca marched out first, long crimson hair, held up in its braid, then almost like a sinister shadow that follows a bright light came Shad, spikey silver hair and a pleasant but cocky smirk, giving no indication of the deceptive nature underneath. The crowd did not honestly know how to cheer or not for them because they loved Rebecca but hated Shad. So for now they settled in the middle while the couple made their way into the ring to face down the sisters. 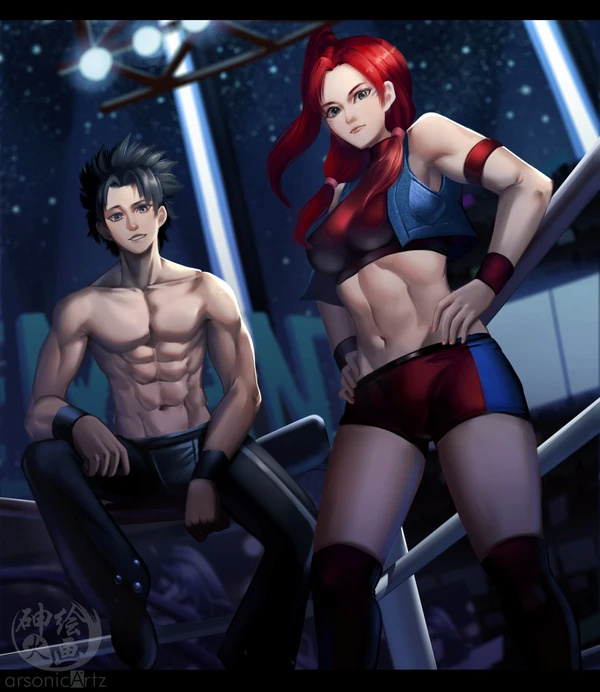 "She's Beautiful." Sarah said when she saw the long crimson haired woman coming out first.
And he's hot! Kinda creepy tho." Brittany said when she saw the spiky silver haired man that followed  the crimson haired woman not long after. They are Rebecca Owens and Chad Owens, The Owens Family, a husband and wife tag team that will be facing against Brittany and Sarah tonight.

The twins would notice how strangely the audiences reaction towards their opponents. It was like they didn't know if they cheer or boo them. "Were they tweeners?" Brittany thought to herself, since tweeners can be a face as well a heel at any time, it was only reason she could think of about this situation.

But it didn't concerned her nor what her attention needed to be on. What her attention needed to be on as her and Brittany's opponents as they entered the ring and looked at the twins while the twins looked at them. The size differences between both teams was apparent to everyone with Rebecca and Shad being both 6'0 while Brittany and Sarah being both 5'3 so the size advantage goes to the married couple and is going to be quite an obstacle for the twins to overcame but they were confident they could do it!

Brittany and Sarah walks up to their opponents and extended their hands out for a shake. "Yo! Name Brittany Stacy!" Brittany proudly and confidently introduced herself as she extended her hand out to Shad. And my name is Sarah Stacy, it's nice to meet ya! We hope to have a good match." Sarah introducing herself as she extended her hand out to Rebecca. "Tho no hard feelings when we win, okay?" Brittany boldly proclaims. "Brittany! Sorry about her she can be a bit bold and brash." Sarah apologizing for her sister is talking something she often do. "But admittedly we did came here to win and do like our chances." Sarah said with a confident smile, while she might didn't like it how upward she was about it but she didn't disagree what her sister said.
_________________
Double T

It was an interesting experience as they entered the ring and beheld their opponents. Both were a full head shorter than the married couple but obviously did not lack for spunk as they brazenly and boldly went up to Rebecca and Shad and introduced themselves. Rebecca took the hand offered to her and shook it heartily. "Confidence, that is good to have, and you clearly do not lack for it, just be careful that your words do not create promises you do not keep. Shad and I have been fighting together for over 10 years at this point. That is what gives us the edge." Her smile was gentle even as she stood like the Colossus of Rhodes over the twins.

Shad however did not shake the hand offered to him...rather he made a most gentlemanly of bows, catching her hand in one elegant motion and kissed the top of it. "Yes, indeed my love, experience. But do not discount your own skill, or mine in that equation either. But I hardly knew our opponents today were beauties of the highest order. Indeed with the exception of my dear Rebecca I have never seen more fair in all my life. Tis a true shame that we must mar this meeting with violence. Ah life can be so cruel some time.

It was all Rebecca could do to keep a straight face as her husband talk. The Silver Haired Rogue was in his element, and she knew his game, and so too did the audience who were shouting warnings to the sisters. It was his go to strategy that had gotten them so many victories back in the local leagues in Europe, he would scope out the enemy strengths, potential weaknesses, and strategies, all while appearing to be Cassanova. She had fallen for it when she was first starting out, he was like a snake hypnotizing it's prey before striking. This is what made Shad so dangerous and why the audience was trying to warn the sisters before it was too late.
_________________
Valicon's Roster