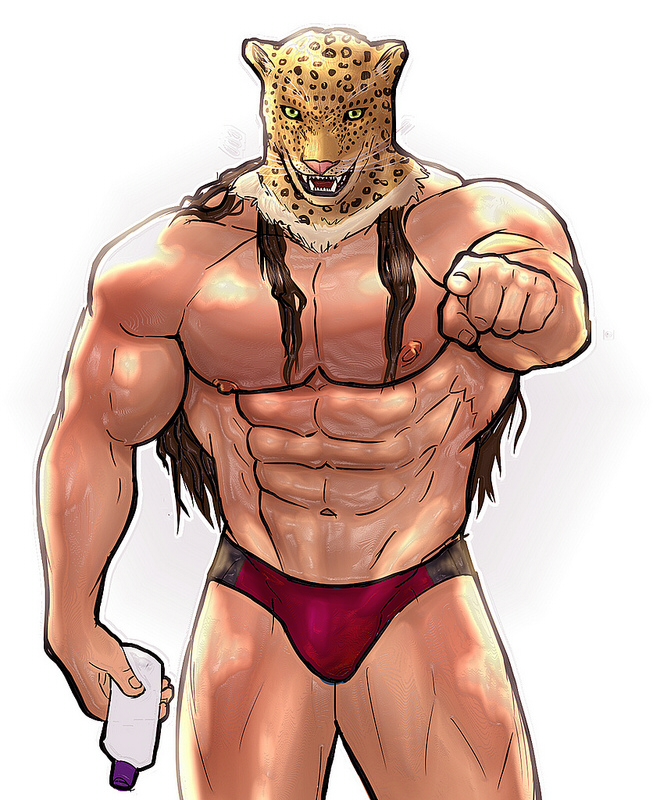 King returns to the ring after a very long absence and now, refreshing himself to get back in a match ready to take on the jobbers that he loves to dominate and prove it to them he still got it! The great big beast heading out from the locker room and down the hallway to the back stage until he walk passed the red curtains and show up on stage, flexing his muscular arms as he roaring out loud that the crowd responds with loud boos, some cheers, either way, he doesnt care and only thing that matters to him right now is fuck his sexy opponents up!

Standing there in his dark red trunks, black boots, and his signature black leopard mask with his tanned skin shines from the water he poured onto himself earlier before finally he start walking down the ramp, heading to the ring. Looking around smells the fresh wrestling arena with the stupid crowd drinking their piss beers and munching on nachos and hot dogs, eventually the dirty beast walking up the steel steps to get on the apron and step over the top ropes to get inside, moving on over to the center of the ring.

It was going to be an involved return for the both of them. The two having been busy with other exploits which left them in the unique position of being pushed into a match like this together. Of course that didn't mean it was going to be remotely easy. It might have been so if they were actually facing each other. Instead they were being pulled into a very dangerous setup against someone that they knew could be a lot to handle.

But there wasn't any option to turn it down and they had to prepare with the intention to win. They did have the advantage of numbers and that could make all the difference. The two knowing they'd have to cooperate and focus on bringing King down before any other considerations could be given. They had their own strengths and enough dedication to make the most of them. 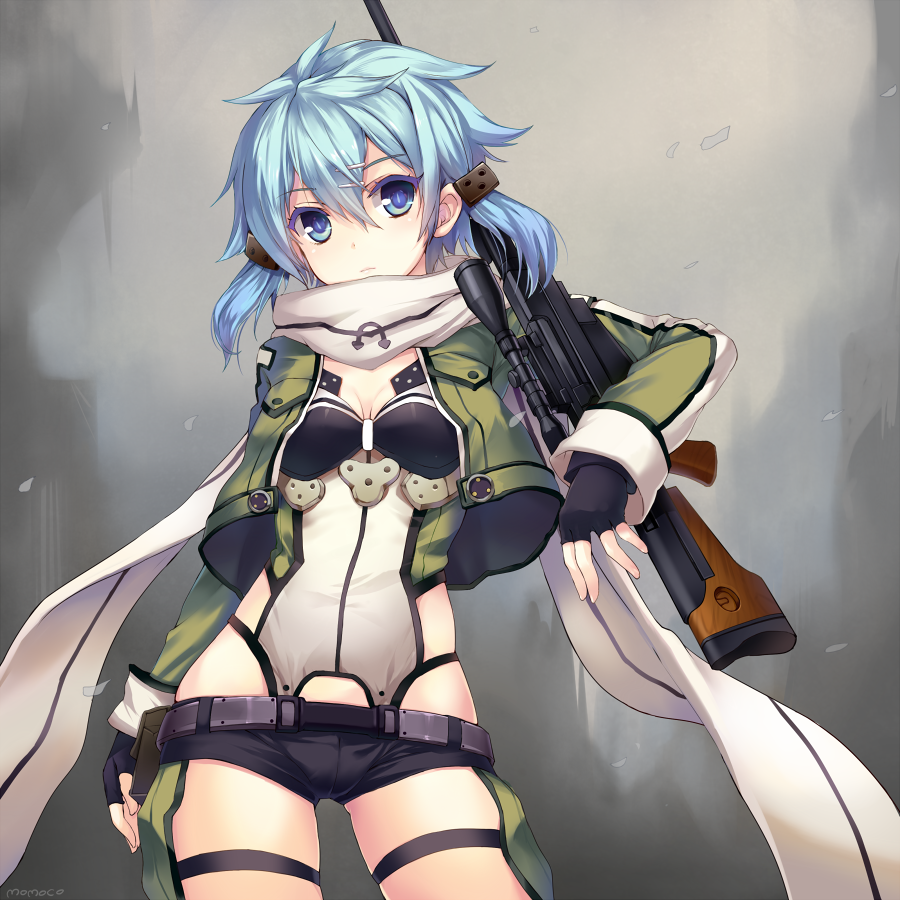 "Here we go." Shino keeping a cool and collected approach to this. King was just a single opponent and one that was easily understood. If she kept that in mind then all she had to do was bring the most out of her strengths and limit what he could do well. She went out a bit ahead of Lisa since while they were cooperating for this match they weren't exactly an official team either. Heading out there in her tight outfit that left little to the imagination. It let her move as freely as she'd like and that could be huge for this matchup. She wasn't the type to focus too heavily on the crowd but did acknowledge them before making her way to the ring. Slowing down a bit as she didn't like the idea of sneaking in there alone with someone as...questionable as King happened to be. 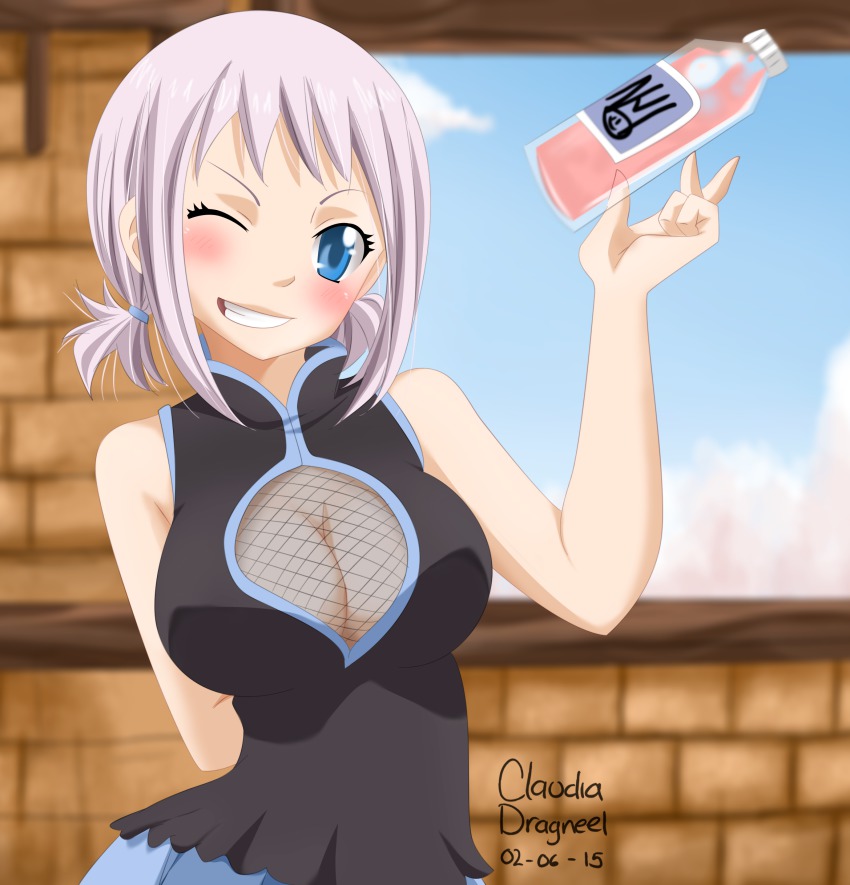 On the other hand there was no hesitation for Lisa getting out there. Something she just embraced at this point was that she had to be dynamic and not worry so much about what she was doing. With that in mind she was out there pretty fast and keeping the mood light with waves to an excitable crowd. "Hey everybody!" She was all about getting fired up for this. Giving a nice bit of contrast to her ally in this match and certainly being a lot more pleasant too endure than her opponent. The netting covering her breasts within her black top gave a good view of her goods which bounced along with the excitable girl as she made her way to the ring.

Soon enough both were in there and were ready to get rolling. Even if they had their concerns respectively, that didn't mean they weren't going to give this all they had. They knew how tough this kind of match could be. But if they kept focused and hammered away at King then they'd have no problems. Both staring him down and looking ready to bring this beast to his knees.
_________________
Fairy World Characters

King awaiting in the ring to face the two jobbers and wanted to see that babe Lisa again, plus a new girl he doesnt think facing her before so eager to introduce to her with his thick cock! Thats all whats going on in his mind, want to fuck em up and fuck em good. Soon the horny beast finally see the two coming out from the backstage and making their appearance, love how the babes looking good today and remembered Lisa real well but never met the other one, but they'll remember him once he get his ways with them.

As they enters the ring and seeing how great the babes look, he couldnt help himself to slowly approaching them closer, but still keeping a few feet away so he can get a better view of their figures and outfits. "Mmmm mmmm! Cant wait to destroy you two! Come and get it! I know you want this package!"

Whenever the match can get get start it, the big bad beast wanted to get it in first. He rushes at the two girls in hoped that he can get them down by bringing his arms out while moving in between the two. King tries to get his arms around front of their necks and wrap it up, leaning forward to have them leaning back, glaring at the two as he holding them in place, hopefully.

"Glad you two are here, I am hungry for some delicious opponents!" Turning his attention to the blue hair girl in green Shino what he remembers and snap his forehead to headbutt her face! "GRRRR!" and does the same with his good o' jobber Lisa to share another headbutt to her face too! "GRRRR!" So he can finally let them go, only by snapping himself backward, pulling them along with the beast and falls backward, coming down to slamming their pretty faces onto the mat in his double reverse STO! "HMPH!"
_________________
KillerV- Character Select

Things got going in a hurry with the match. They had to expect that much against King of course with his personality and approach to matches. And there wasn't much to say either when he was literally on top of them and his annoying traits were being shoved in their faces. Literally in the case of Shino. Taking a dazing headbutt to the face "You damn..." the girl groaning out as she was shaky on her feet from that surprise cheap shot. "Gah!" Lisa crying out as she took a hard hit as well to the head. The two had to push themselves just to stay on their feet. But that didn't matter much as they were taken hard to the mat and groaning hard as their bodies were struggling to catch up with the shocking pain.

Both girls had to try and roll away from the jerk. Neither of them were feeling great. But they both had to get up and stabilize themselves. Of course that was easier said than done since his attack was dazing them pretty effectively. Lisa was rolling away a bit further before getting up. Shino pushed herself a bit harder though and tried to scramble up while King was hopefully enjoying his start to the match and instead using the chance to stomp on his stupid mask as hard as she could. "Damn...beast man!" She growled a bit riled up.
_________________
Fairy World Characters

King punishing the two real quickly when he managed to get his hands on them, knock their noggin and send them down hard face first onto the mat before releasing the hold, giving them some time to recover as he sitting up and getting back up on his feet so he could get the advantage over them as he could, seeing Lisa still recovering but on the other hand the other girl Shino seem to be quicker on getting up and able to stomp down on his head when he just sitting up. "GRRR! THE HELL?!"

He quickly bring his arms up to covering his head while getting back up on his feet, but ending up getting on his knees in defense position, trying to enduring Shino assaults. When he finally facing at her with his arms up to block her stomping, he pushes through trying to lunge at Shino going to get his arms around her waist and lift her up over his shoulder as he quickly bring his hands on the back of the thighs. "BITCH!" Whip her down as he drop on his knees to slamming her back on the mat into his vicious Spinebuster! "GRRRRR!"
_________________
KillerV- Character Select