Victory Condition: To win one has to force their opponent to submit twice out of three possible rounds
Rules: Standard/Submission
Attire: Standard 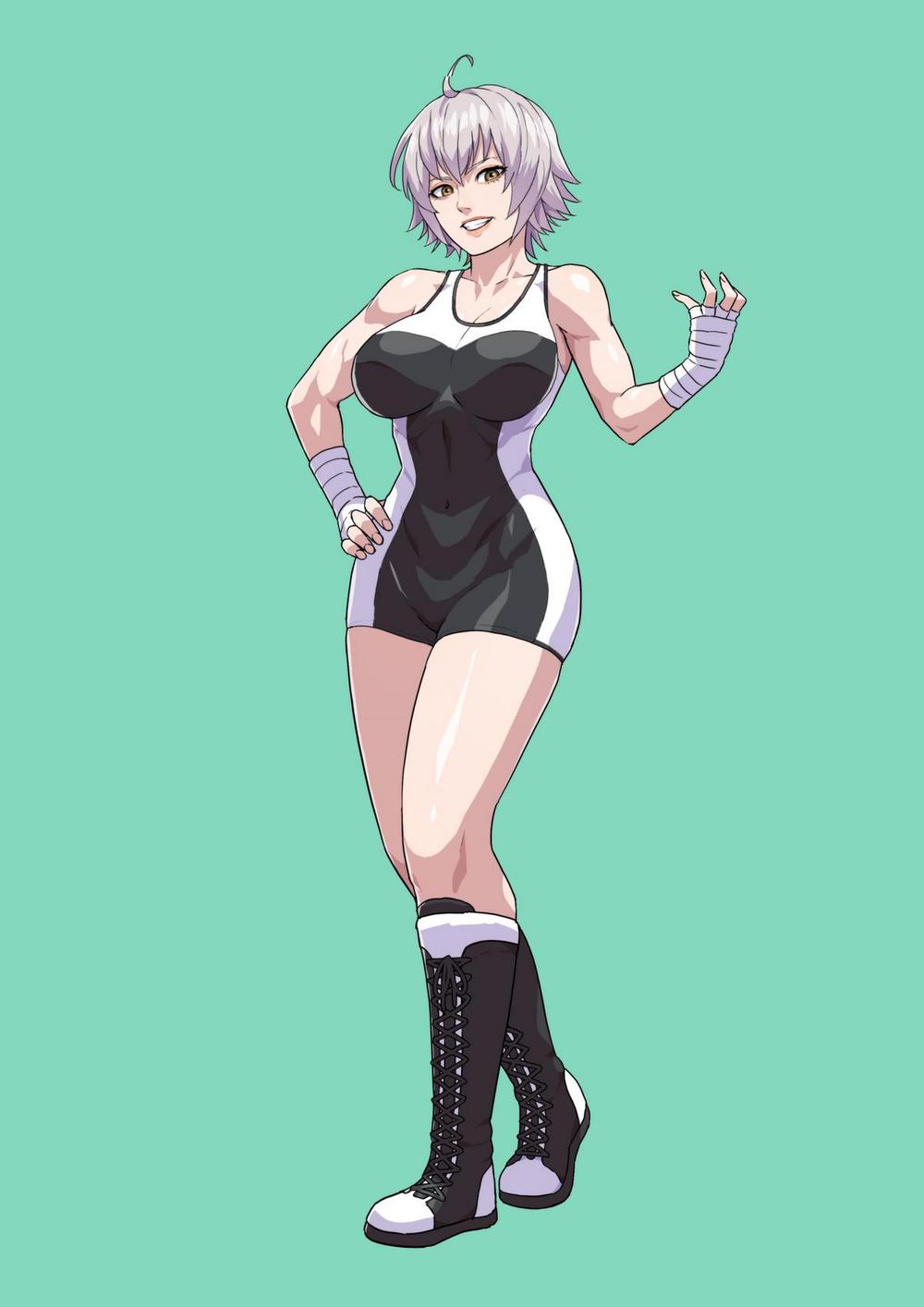 Angela was looking forward to this match, after all she enjoyed submission matches more than anything. The Chance to look a pretty girl into a hellish hold until they were forced give in and tap out or verbally submit. The joy of breaking apart another woman's willpower and desire to win and force them to cry out in defeat was just exactly what Angela wanted and while she hadn't met or heard anything about her opponent today, she was quite sure that she would enjoy doing this today just like any other day when she was in the squared circle. The platinum blonde woman had just finished lacing up her boots as she stood backstage, fixing her outfit to make sure it didn't feel uncomfortable, once it was set though there was little give in the outfit. She wore a tight fitting black and white singlet along with taped fists and a pair of black and white boots. All ready and rearing to go, Angela stepped out of her locker room and headed down to the Gorilla Position. She would wait there, for her entrance theme to start.

When the music began to play, the French Nightmare would make her way out onto the ramp as she got a fair bit of jeers and boos from the crowd. Of course, she had a bit of a reputation in Europe but here in Japan she had a fairly clean slate though it seemed as if some people already knew what kind of wrestler she was and they were looking to show her that they knew by shouting and screaming how terrible she was. All Angela could do about this though was click her tongue and roll her eyes. She found it bafflingly stupid that they thought she cared what they had to say and do.

The Nightmare continued her treck down the ramp until she reached the square circle as she would roll in under the bottom ropes once reaching the ring. She moved up to her feet and rolled her shoulders as she walked around the squared circle a bit, then turned and raised her middle finger to the crowd, proceeding to then walk off towards her corner and stretch her neck out a bit.

She couldn't wait to get her hands on this woman, the crowd was serving as enough of a cause for frustration and annoyance that she right now wanted to let some of that out, on whoever this poor woman was.
_________________

Xiulang was primed for her next match. It was going to be a more orthodox kind of match than her first one which had a heavy hentai angle, but still it wasn’t going to be a fully standard match. Instead of that it was going to be a submission match, and that unsettled the Chinese woman a little since she excelled in martial arts but the limb crippling holds weren’t her thing. She was at her best in brawling kind of combat, not grappling with her rival, so she would need to improvise in order to take the victory home, or at least try.

From her vantage point Xiulang could have a proper first look at her rival as she made her entrance. The thing that impressed her the most was how some people in the crowd booed that white haired woman as she walked down the ramp. Wasn’t that French woman a debutant? How could it be that the people in the stands had something against that wrestler they had never seen? Whatever beef was between Angela and the respectable went in both ways as the French flipped the bird at everyone in the stands. Xiulang denied in disbelief out of that lack of respect.

When her entrance theme started, Xiulang composed herself and made her appearance. Her debut was a mild one so she didn’t have many fans yet, but the crowd was always enthusiast in the AFW since it was one of the top wrestling federations in the world. Xiulang accepted any cheer coming at her with a dignified look, but kept her sights locked on the ring. Once she reached the arena she slipped between the ropes and waved a final salute at the crowd before turning to face her rival. She looked strong with a well toned body, and had some unsettling look to her. That would be a hard match.

“ I hope we can have a fair fight.” Xiulang bowed before her rival in a show of respect. She couldn’t care less about how despicable that woman could be, she wasn’t going to start disrespecting her rivals because of that. Every oponent deserved politeness from her part, that was the lesson she took from her grandfather and she was going to honor it to the end.
_________________
BEHOLD MY ICY FORTRESS

Angela's gaze would look up at the ramp as she heard the music of her opponents entrance, it seemed as if her opponent was a cute China girl of all things. Angela couldn't help but smirk a bit, as she looked on as the woman made her way down towards the ring, seeing her slip in to the ring, Angela would step out of her corner and start to make her way towards the center of the ring.

Catching sight of her opponent bowing before her....got Angela to click her tongue.  She wasn't about to let up on that moment though, as she would try and rush towards her bowing opponent and try and grab onto that head as she was rising up. Trying to then launch her knee up and smash it into Xiulang's forehead! Trying to jumpstart the match in a manner that the crowd most definatly wouldn't like!
_________________

Xiulang was just about to pay the price for her good manners and sportswomanship. Turned out not everyone in the league was in her good sports and Angela was one of those nasty rivals that were a true pain in the butt. Or rather, a pain in the face. Just when Xiulang was bowing in a sign of respect to her rival, the crowd and the match that was going to start, the Chinese noticed her rival lunging forwards in some kind of rush. She knew some foul play was coming, but her position left her with no choice, she just didn’t have time to react in time. Angela’s knee impacted directly against Xiulang’s forehead.

With a cry of pain Xiulang staggered a little, taking two steps back as she checked her forehead for blood. It was clean, just a bruise. Angela’s rushed attack impelled the referee to ring the bell and start the match before intended. After hearing the bell Xiuland knew that every attack was legal now, so she decided to go for some retaliation in the form of a one-two kick combo against each sides of Angela’s stomach. The woman’s legs were so quick they looked like blurs foreveryone.
_________________
BEHOLD MY ICY FORTRESS

Angela's sneaky attempt to start off that match ended up pretty good for her, she watched as Zheng Xiulang stumbled backwards and held her forehead and showed off a cocky grin at the sight. Raising her arms up as she got ready to bring it out. Though Angela was the one taken by surprise now as she saw Angela go for those kicks of hers but barely saw them connect, the lighting fast kicks striking at her side and causing Angela to gasp out and stagger backwards.

The arms of Angela went down to shield her side and protect her from further attacks and massage her side a bit. She would shake her head and throw an angry glare at Xiulang before she decided to rush forward! Throwing caution to the wind she would try and tackle the Chinese fighter down towards the ground with a spear!
_________________

After Angela decided to promptly start the match with a knee to the face of dubious nature, Xiulang found herself in a awkward spot she didn’t want to be. Fighting under those dishonorable circumstances wasn’t her thing, but she wasn’t going to be shy concerning retaliation. That was why the Chinese threw her signature strike, flash speed kicks, at her rival’s side to test the waters and see how quick of reflexes Angela was. She turned out to be quite proficient in that matter because no matter how fast could Xiulang move her legs, her kicks only managed to glance the white-haired’s midsection. Despite that, it looked like her kicks had some damage done since Xiulang could notice with a smile how her rival reached with her hand to her side and rubbed it.

But the joy was fleetingbecause even before she could withdraw her leg and return into a guard stance Xiulang could only notice how her rival was charging at her instants before her spear impacted against her chest. With a groan of disatisfaction and pain, the Chinese martial artist fell on her back, dazzled for some instants before trying to roll over so she could get some distance before Angela could capitalize that situation.
_________________
BEHOLD MY ICY FORTRESS

Angela wasn't about to let a woman with such lighting fast kicks have free reign to stand and keep throwing them. Gritting her teeth as she charged forward and ignored the pain from those kicks, she stepped in and drove her shoulder into that chest and midsection of Zheng Xiulang. Taking her down onto the canvas with a fearsome spear and earning herself a groan from the Chinese woman.

She then felt how Xiulang tried to roll over, but Angela would be on her right away. Moving on top of Xiulang and trying to catch her back. She would mount it and grab a hold of that head by her tied up hair, and try and slam her face into the canvas, looking to grind it down into the mat as if she was painting the mat with her foe's face. After some light but painful humiliation, Angela would try and snake her right arm underneath that neck and the other up around her head. Trying to look in a rear-mounted choke hold. As she tried to squeeze on that neck and head and lock in the first submission hold of the match. Slowly sliding backwards to place her full front against Xiulang's back and pin her down with her weight.
_________________