Search
Latest topics
» SRW: The Warden meets an Enigma.
by Tarantulust Today at 3:32 am

» Sending A Message
by LunarWolf Today at 2:32 am

» AV 20 Juri Sanada vs. Belinda Northman
by LunarWolf Today at 2:32 am

» Katsumi Aomine Vs. Misako Uchida
by LunarWolf Today at 2:32 am

Galina Romerno - The Rose of Russia

Galina Romerno - The Rose of Russia

Strategy: Get in, batter the opponent, don't stop till their beaten down
Style: Down and dirty, aggressive, pit fighter
Type: Striker/Dirty

Endurance: ***** - Galina is often able to take such a beating that most men would buckle under
Strength: *** - She packs quite a bit of power behind her frame
Speed: **** - A fast little thing, helps to get the advantage
Defense: ** - Not her strong suit, she's more of a stick and move than a stay and take it kinda girl
Technique: **** - Galina might act and fight crude, but there's a method behind it all.

Strikes: ***** - Hits hard and at the right places.
Submissions: ** - Can choke people out if she mounts them, that's about it.
Powerhouse: *** - Galina can pack a surprising amount of power that lets her heft people around
Aerial: ** - Can do some jumping moves, but is at home on the ground
Counters: *** - Despite her penchant to stick and move she can be pretty creative if need be.

The Hammer: Galina stamps on her opponent's nearest foot, followed by grabbing their head and biting their nose as hard as she can before then jumping backwards into a facebuster to KO them on the mat.

The Sickle: Irish whipping her opponent to the ropes Galina will rebound off the ropes and perform a spinning discus clothesline to nearly decapitate her opponent, the whiplash and impact usually outright ending her opponent's fight. 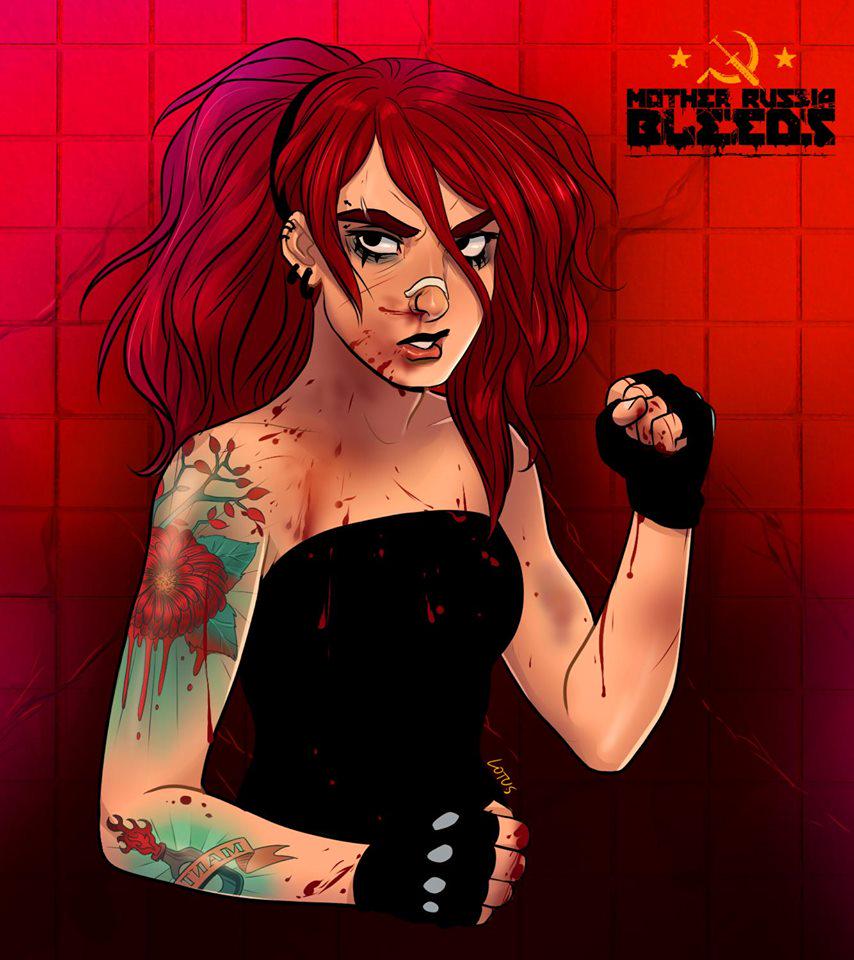 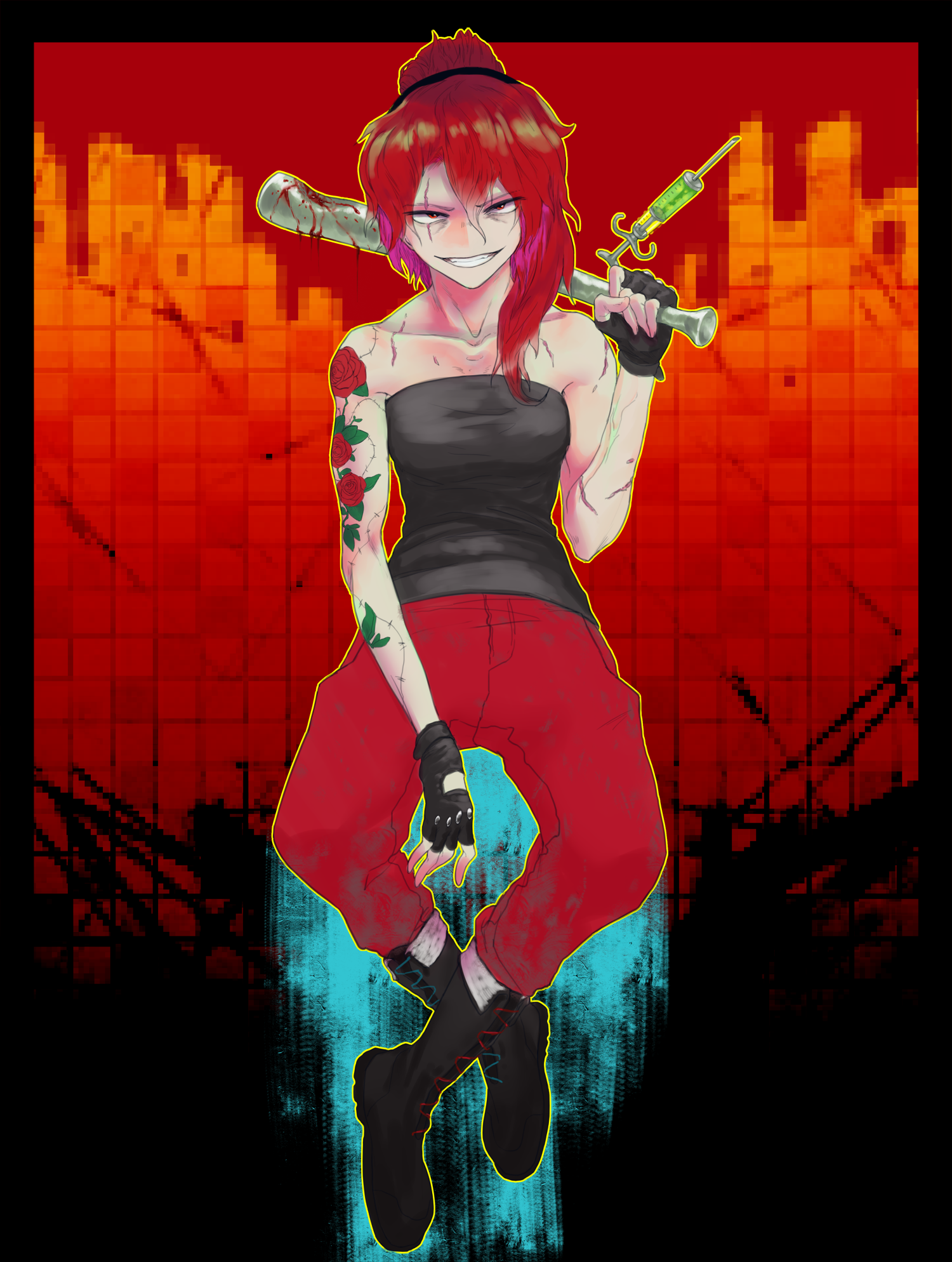 Personality: Crude, impulsive, charismatic, hot headed, brash, prideful, loyal, brave. These words are Galina in a nutshell, she was brought up from an early age to stand up for herself and take no gumption from anyone. She'll freely speak her mind and insult people to their face if she feels its warranted, not really seeing much point in following social norms she'll often flaunt them and laugh when pointed out. She loves to fight and will often try and pick them whenever she can, more for the sweet rush than anything else. In battle she loves to taunt and mock her opponents as she batters them. That's not to say Galina lacks morals, once she decides she likes someone she'll be your buddy to the end and be unwaveringly loyal knowing that is a vital coin the world. Even if her friends go into a battle they have no chance of winning Galina will be there with them till the end.

Past/History: Galina was raised in a Romany community in the Russian countryside, born to a dad who was a pit fighter and a mother who was a fortune teller. Galina was put into the art of fighting as soon as she could fully walk, often roughhousing with the other kids and proving herself against the bigger and taller guys. Life was rough and simple, but Galina was happy with it. But as it happened events would align themselves to ensure that the rose of Russia was given a shot at glory. The girl was battling in a free for all battle royale that lasted for several hours and involved her and 29 other brawlers in a field. Through a mixture of grit, wit and keeping herself moving and in check Galina came out on top.

As it happened her father was an old friend of a top MMA promoter in Russia who was looking to build a women's league and wanted a top star for it, but he wanted to tap into the Romany side of his country to find what sort of combative talent they possessed. Galina was given a one way ticket to Moscow and cut her teeth in proper arenas, she was doing well. But yet it lacked something, a certain spark if you will. MMA rings were nice, but Galina loved the freedom of fighting anywhere at anytime that she had been raised with. It was during this that she had looked up fighting places in other countries. Friction was the first result that turned up, instantly Galina was hooked. But how to get there? She could have flipped the bird and snuck aboard the next boat, but no. Galina was taught to honour her debts and had been given a chance.

She spoke it over with her father and promoter and a deal was struck, Galina would fight in Friction and give a portion of her winnings to her community and also help promote the place she once worked in. In exchange she could do whatever she liked so long as she didn't bring shame to their names, with this vowed the rose packed her bags and headed to Japan intent on cracking heads just like she did growing up........

Galina is a good cook, her community had to make food count so she was taught to do that growing up.

Her favourite alcoholic beverage is a Budweiser mixed with a tablespoon of Vodka.