Yvette was moving almost by instinct at this point, driven onwards almost purely by the aphrodisiacs filling her body. Daichi was still talking, but the French girl wasn't listening. One look into her eyes showed how she was barely even conscious! Yet still she fought on, pushing Daichi down onto his back and sitting on his hips, her still sopping wet pussy pressing right up against the underside of the boy's cock!

"We're not done yet," Yvette said breathlessly, "Not until one of us can't fuck anymore!" Daichi tried to shove her off, but his weak pushing wasn't enough to budge her. Yvette was only going to get off if Daichi managed to outfuck her!

The French girl rubbed her hips back and forth, the oil making her movements feel very smooth. Her pussy lips parted around the underside of Daichi's shaft making it slick with her juices. "I know you have more left in the tank," Yvette said, "I want you to blow it all inside me. That's your reward for being such a good boy this match!"
_________________
The Party!

The moment he heard just how gone Yvette was deep in her lust and desire to win, Daichi effectively got creeped out, apparently snapping out of the effects from the pool of hormones. She talked like a normal person, but he could tell she was just crazed because of the intensity of their battle of sexes. "Well, I guess I have a little more, but honestly, I think that maybe we could talk this ou- AAAAGH!" The moment she started to grind her pussy on his throbbing cock, a mixture of pain and pleasure started to act like an electric shock on his little monster. "Uuuuhwuh... guess not..." He said, finally understanding that there really was just one way out of this.

He started to grab her hips as well, beginning to fix his position in order to begin the final mounting. "I see... lucky me..." He responded to her, trying not to act like he didn't wanted to finish inside of her. "God, if my sis finds out, she'll kill us both" He said to Yvette, fully understanding that she wasn't even listening to his berating due to her situation. "You know what? she didn't wanted to see me getting screwed, so I can do this without her finding out" Daichi said, a new feeling apparently giving him strength. "I can also say that this bikini looks better in me than it will ever do in her..." He continued, simultaneously getting faster and faster on his grinding. "Screw her, If it was her in here against a dude or another chick, i would come to support her..." He... continued, finally with enough hardness to actually resume the penetration.

"Screw my sister, screw this match, screw you Yvette, screw me... screw..." Daichi just began to give it his all as he regained his vitality one last time. "Screw..." He finally was about to explode, both sexually and emotionally. "FUCK EVERYONE!!!" He howled while he humped the french girl, almost as if he was trying to drill her to the floor.

Yvette was panting weakly as her heart thumped loudly in her chest, rubbing her pussy harder and faster against Daichi's cock to get him fully hard. The boy seemed to finally give in as well, grabbing her hips with a surprisingly firm grip to hold her in place so he could insert his cock. He had regained his vitality and his will to fight, suiting Yvette perfectly as the French girl sought to ride Daichi to a final climax to end this match.

"Nnnnnnngh!" Yvette gasped as she felt Daichi's cock slide all the way into her pussy, her slick lips offering no resistance at all as she swallowed his cock all the way up to the base. Daichi's size didn't surprise her anymore as she rode him hard, feeling the tip of his shaft smashing into her insides in a painfully pleasurable manner. "Ohhhhh fuuuuck!" Yvette let out throaty moans as she felt Daichi hump her wildly, his hips smashing against hers as they fucked each other, pushing beyond their limits.

Yvette's mind was a complete haze of pleasure, her entire body quivering as she fucked and got fucked in return. She didn't care about winning the match anymore, all she wanted was to satisfy her lust after being driven beyond her limits by the aphrodisiacs coursing through her body. She leaned over and kissed Daichi, grabbing his cheeks with her hands as she lustfully locked lips with the femboy. Even through the haze of pleasure she knew that after this both of them would be finished.
_________________
The Party!

While his little rant managed to pump his body full of adrenaline, Daichi still was very much on the verge of getting into a orgasm-induced coma. It seemed like Yvette was also lost deep in her lustful instincts, the boy would probably be flattered and honored about causing such reaction on a girl that pretty, except that he couldn't afford that at the moment, mostly because his cock was about to explode, filling the girl with the remnants of his seed, after this he would be as dry as a raisin.

"Yvette, I-I'm gonna- I'm gonna...i'm cu-'" And just like that, Daichi finally was ready to admit defeat. "KYYYYAAAAHH!!!" With a final scream, he orgasmed, releasing the remains of his load inside of Yvette, so much of it that it dripped after it was done filling her pussy. The femboy fell on his face into the warm oil, his energy finally gone, he was barely still awake, he only had the strength to turn his head towards the bunny girl. "C-congrats... You- you did it..." He said, with his mufled voice, smiling and breathing with difficulty.
_________________
XXXXXXXXXXXXXXXXXXXXXX

Yvette gasped and moaned in pleasure as Daichi slammed her hard, pounding her with a rapidity and vigor that was stronger than anything she felt throughout this match. This was it, the final climax! Yvette felt herself getting pushed over the edge, losing herself to the pleasure, submitting to it all and allowing Daichi to pound her into orgasmic bliss...

Then the boy came hard! His semen pumped deep into Yvette's body, overfilling her pussy and dripping out from around the tight seal of her pussy. But Yvette was disappointed, as Daichi had blown his load far too quickly! He pounded her fast and hard, but had barely lasted a minute before he drained himself inside of her. Yvette was left hanging on the edge, completely unsatisfied!

"You're done?" Yvette said, feeling the boy go limp. She let out a sigh, shaking her head as she pouted. "You weren't able to satisfy me in the end," she said, "Guess I'll have to do this myself!"

Finally, Yvette came on Daichi's face, probably the messiest orgasm that he ever witnessed, and he got a front view of it. Her fluids, as well as his own seed shot out of her snatch, covering his face with so much juices that he immediately passed out, part of it by drowning and other part because of his exhaustion finally kicking in. The last things that he managed to hear were the accomplished roars from the crowd celebrating the bunny girl for her victory. After that, the femboy pretty much lost consciousness.

After an indeterminate amount of time, Daichi woke up on the infirmary from the arena, clothed with a withe blanket, and the aromatic smell of the oil still lingering through his body. Understandably, the androgynous boy was feeling extremely weakened and thirsty, his mouth tasted of oil, salt and dryness. "Oh man, how long was I out?"

"Twelve hours..." Another voice made the boy yelp, he turned his head to the source of the sound, finding a familiar face looking at him, sitting on a chair that was located near his bed, her green eyes shined so intensely that they made her look feline in appearance, and they helped Daichi locate her among the darkness of the room. She was dressed on her coat, tie and shirt. But it wasn't the fact that she had been looking for his awakening the thing that disturbed him, it was the fact that she wasn't looking happy at all.

The big sister herself: 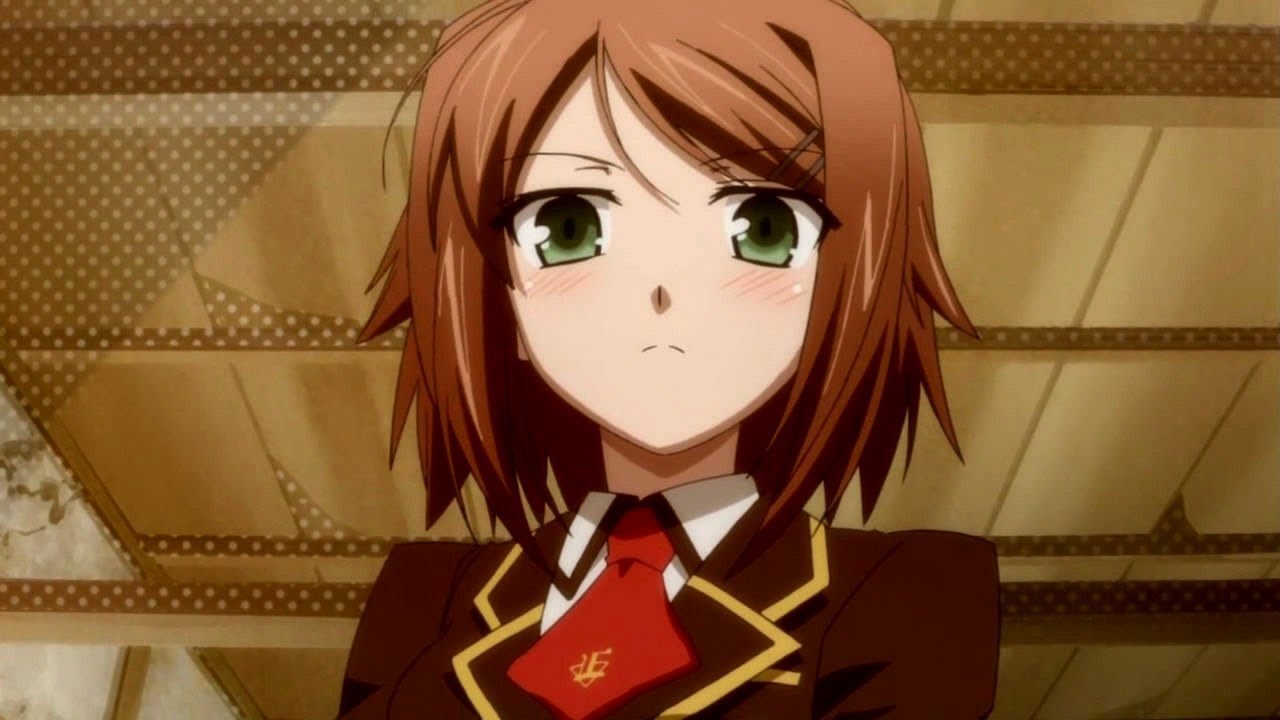 "Did you sleep tight, Dai?" Akiko asked her brother, if only to make him snap out of it. "Uhmm... I guess? W-What are you doing here? I thought that you said that you didn't wanted anything to do with Sex fighting..." He questioned his elder twin, she was prone to always accomplish her promises and rarely talked things that she wouldn't do. "I simply... changed my mind." She responded.

"So, uhmm... did you saw... everything?" Daichi said, getting red in shame. "I did..." She simply responded. "... Including everything I said...?" He asked, she simply nodded, and with that, the femboy lied in bed completely once again, thinking that he was about receive a lecture. "I'm not mad, Dai, at least... Not with you." She declared, her voice seemed genuine.

"Meaning?" He questioned, understanding less and less of Akiko's point of view the more she talked. "Meaning that I booked a match against the girl who fought you, Yvette" This was... Something that Daichi didn't saw coming, he quickly sat on his bed once again, "Why? You saw what happened to me... You wanna feel that as well? He asked hysterically as to why his sister wanted a sex match. "Not that kind of match, you dummy. I don't want to fuck her..." Akiko said, once again confusing the smaller twin.

"What i want..." The girl twin began to talk, as she clenched her fists, her neutral face became one of anger and her voice resonated with an echo that made it sound demonic, Daichi already knew about her temper, and all he could do about it was to shiver in fear, covering himself with the bed sheets.