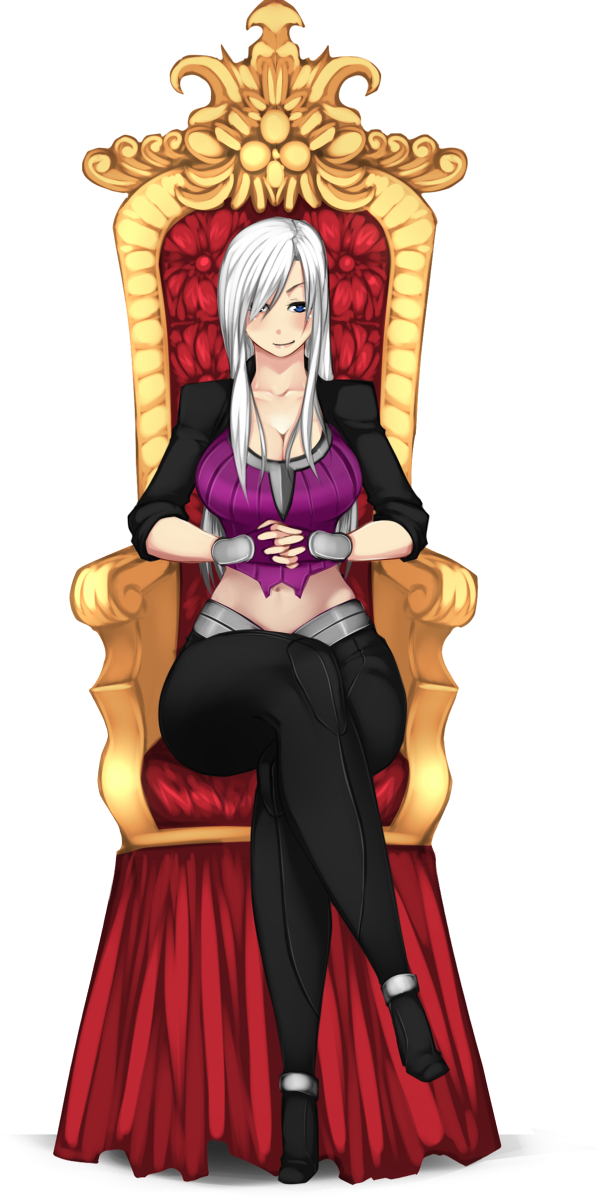 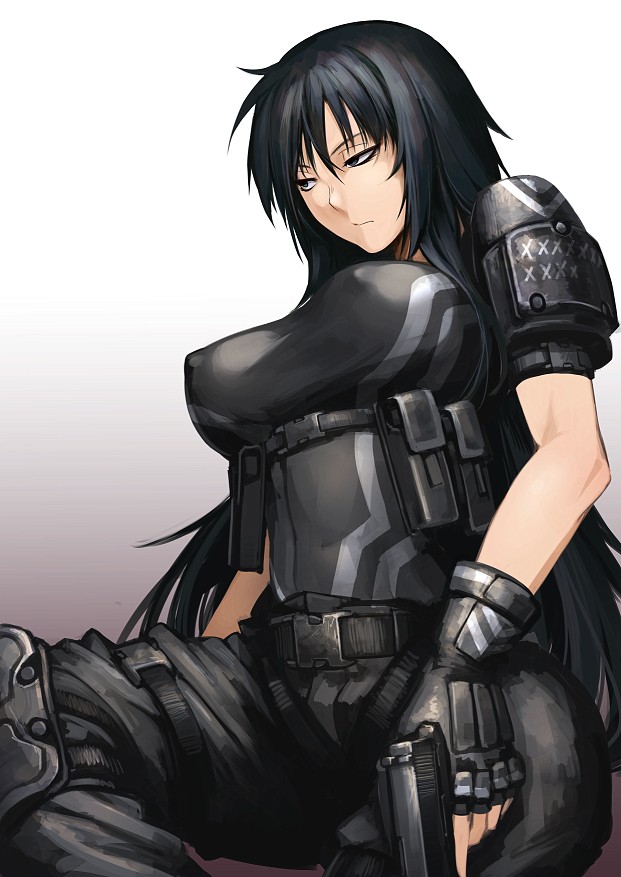 Match type: Hell in a Cell
Rules: None, the match takes place in a ring surrounded by a cage of steel bars all around it, leaving an area around the ring for the combatants to fight in. .
Winning conditions: Pinfall or submission
_________________

Isabella hadn't believed the messenger when the management's lackey came to her with a match at Fright Night offer that didn't require her to strip naked and fuck the daylights out of another woman, her last few matches having been nothing but the hentai variety. Not that she didn't enjoy those matches, but it had been far too long since she had gotten to just beat the senses out of someone. And she didn't like to remember her last match that had been that way. It was official though and while it was up against a name she didn't recognize Isabella didn't care, this was going to be a relaxing night taking out her frustrations of the past year on an unexpecting newbie, and it was going to be glorious.

Her music came on and not wanting to waste much time on theatrics Isabella burst right on through the curtains, stepping out onto the stage in her curve hugging purple top and equally tight black pants with matching boots. Her vest, made to never be able to close around her large chest, had been left in the back so she wouldn't have to worry about it after the match. She had forgotten one vest entirely already and didn't feel like losing another.

It took her no time at all to descend the ramp and climb up into the ring, Isabella only pausing briefly to stare out over the crowd from the ring apron before she stepped through the ropes.
_________________
The Many Characters of Daemongirl

It didn't take long before the Unwanted Ops' theme started to play after Isabella had made her entrance. Being calm and collected, Nanael made her way through the curtain and appeared on stage and looked out and scanned the arena. Nanael and Isabella haven't crossed paths before, but she wasn't afraid or nervous in the slightest. That or her usual pokerface hid it too well. Regardless she made her way down the ramp and headed for the ring.

She walked at an even pace and kept her eyes trained on Isabella as she walked up the steps and stepped through the ropes. Nanael walked up to Isabella, but remained out of each other's reach. She scanned Isabella for a moment before taking a step back and waiting for the bell to ring.
_________________

Isabella took residence at the back of the ring, leaning against one of the corners furthest from the stage to watch the entrance of someone she assumed to be a rookie. Then again just because she hadn't seen her around before didn't mean she was new, she could have just been too weak for her to have payed any attention to her before tonight, either way Isabella intended on turning her into a pretzel. That would make her happy, not Nanael of course but that didn't matter much to the white haired American. "The silent type are you? Come on, give the peope something to remember you by!" She called out while the woman was climbing up into the ring, cupping her hands together to be heard over the crowd.

Nanael wasn't one for theatrics it seemed, could be good if she could back things up in the ring, time would tell. "Want a look?" She said as she stepped out of the corner and over to the center of the ring, holding her arms out to her sides with her palms face up to give the newbie as a good a look as was possible without her taking off her clothes. "Hope you got what you needed."
_________________
The Many Characters of Daemongirl

"Hopefully you won't talk much during the match." Nanael said calmly, but with a somewhat serious tone. The crowd had died down a bit so she was easily heard across the ring. Nanael stood ready with her hands silently raised as she waited for the bell.

It didn't take long for the bell to ring though. Despite her laidback demeanor, Nanael could get pretty excited/aggressive depending on the situation. Nanael rushed forward and went low for a double-leg takedown. Though instead of bringing Isabella down, Nanael intended to lift her up and carry her to the corner before crashing her backfirst into the turnbuckle. Assuming things went her way, Nanael would try to get 2-3 shoulder blocks in before the ref would step in and force her out of the corner.
_________________

So she had an over confident one on her hands tonight, what a shame she thought to herself, she had been hoping for someone at least half way interesting. It seemed she would just have to make due with the joy she'd get from knocking some respect into this woman. "Mind your tongue, it will get you into all kinds of trouble." Isabella said sternly, still smiling with her steely gaze fixed on Nanael. The door to the cell was shut and chained up by the referee who wisely decided to stay outside of the cell, seeing as she wasn't going to be needed until the very end anyways.

Once the gate was closed there was nothing besides the laziness of whomever was in charge of the bell keeping them from going at it. Thankfully they were on the ball tonight and the bell rang fairly quickly, though apparently not quickly enough for Nanael who was halfway across the ring by the time it sounded. The woman went low but Isabella went straight ahead, hands going for Nanael's head while her knee shot forward to slam into her forehead to put a hard stop to the woman's momentum.
_________________
The Many Characters of Daemongirl

Nanael charged forward and went to tackle Isabella. Isabella was ready and attempted to counter her with a knee to the forehead. As Nanael came forward, Isabella came at her as well. Reaching for her head, Isabella quickly grabbed Nanael and threw her knee into her opponent's head.

Nanael took the knee head on and was stopped in her tracks. Pain shot through her head, but Nanael wasn't going to go down that easily. Pushing through the pain, Nanael wrapped her arms around the leg that just struck her. Pushing upward, Nanael tried to get her feet under her and lift Isabella off the mat. She intended to lift her opponent up and then fall back to slam Isabella facedown on the mat with a flapjack.
_________________

Isabella drove her knee into the charging face of nanael to bring her to a swift stop, the American cradeling the woman's head in her hands while pulling her slowly upwards for further fun. However before she could get her back up to her feet the woman did something rather unexpect by not just resisting isabella after that brutal hit but fighting back, lifting isabella up into the air by her leg. Nanael couldn't lift her fully but she got her up high enough to drop back and slam her down onto the mat, Isabella covering up her face with her arms to protect herself as best she could but it hurt all the same.
_________________
The Many Characters of Daemongirl

Despite the strong hit from Isabella's knee, Nanael was able to fight through the pain and continue her attack. Forcing herself up, she was able to get Isabella up high enough to fall back and drop Isabella down on her face with a flapjack.

Slamming her down, Nanael released Isabella's leg and and rose to her feet. She took the moment to press her palm against her head and ease the pain a bit, before she got back into it. Nanael waited for Isabella and had her hands up in defense. "Come on...lets get this over with." Nanael remained calm as she spoke as if nothing had happened.

Even though she seemed calm and uninterested, Nanael was trying to think multiple steps ahead of herself to plan out her next approach.
_________________

Nanael would hear a low grumbling coming from Isabella, "that...hurt...", before the woman shook her head and began pushing herself back up onto her feet, turning around as she rose to face Nanael with an irritated look on her face. "Oh don't you worry, I intend to finish this up reaaal quick." The white haired woman rolled her shoulders about to loosen up, brining her tightly clenched fists up in front of her as she faced off with the other woman. If she really wanted to see how far she could push Isabella that was alright in her book, it just meant Isabella would get the joy of pounding the other woman's face in for the next half hour or so, if Nanael could keep up that is.

She took a couple steps forward, throwing out a few jabs to test the woman's defenses and then stepped it up with a hard left hook aimed right for Nanael's lovely chin. A right jab to her side would follow right after whether that hook struck home or not, Isabella getting up in the woman's face and she didn't have any plans of leaving.
_________________
The Many Characters of Daemongirl