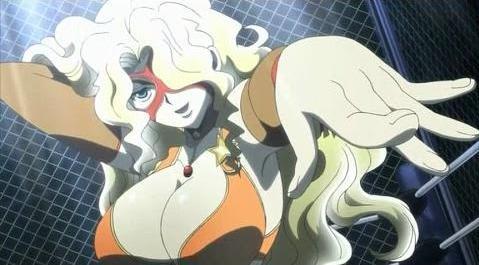 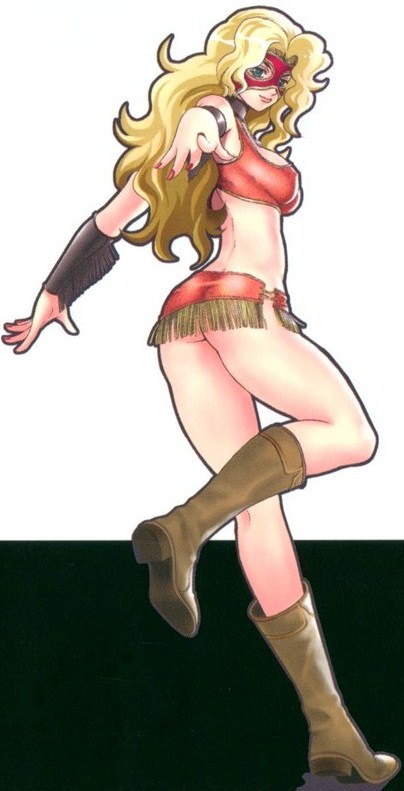 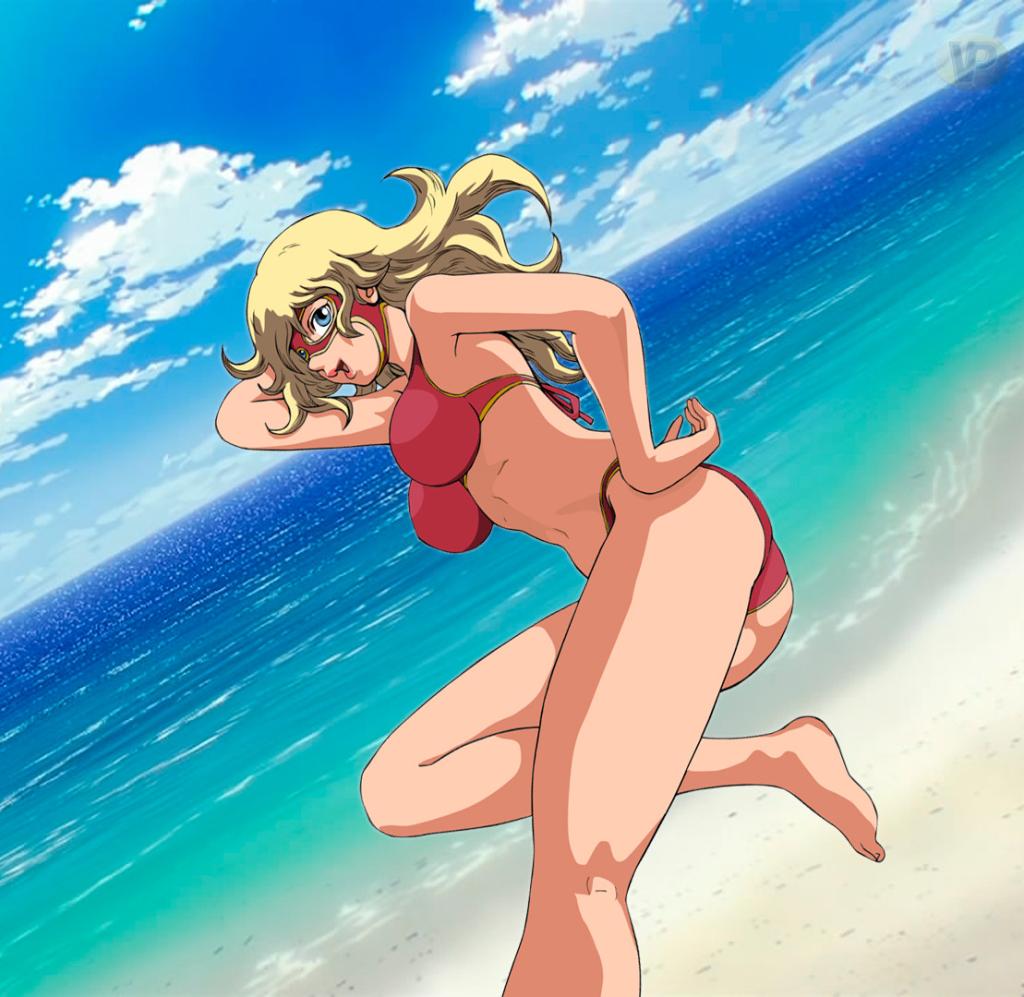 Hitting the Stardust Press on Gwen at SS15: 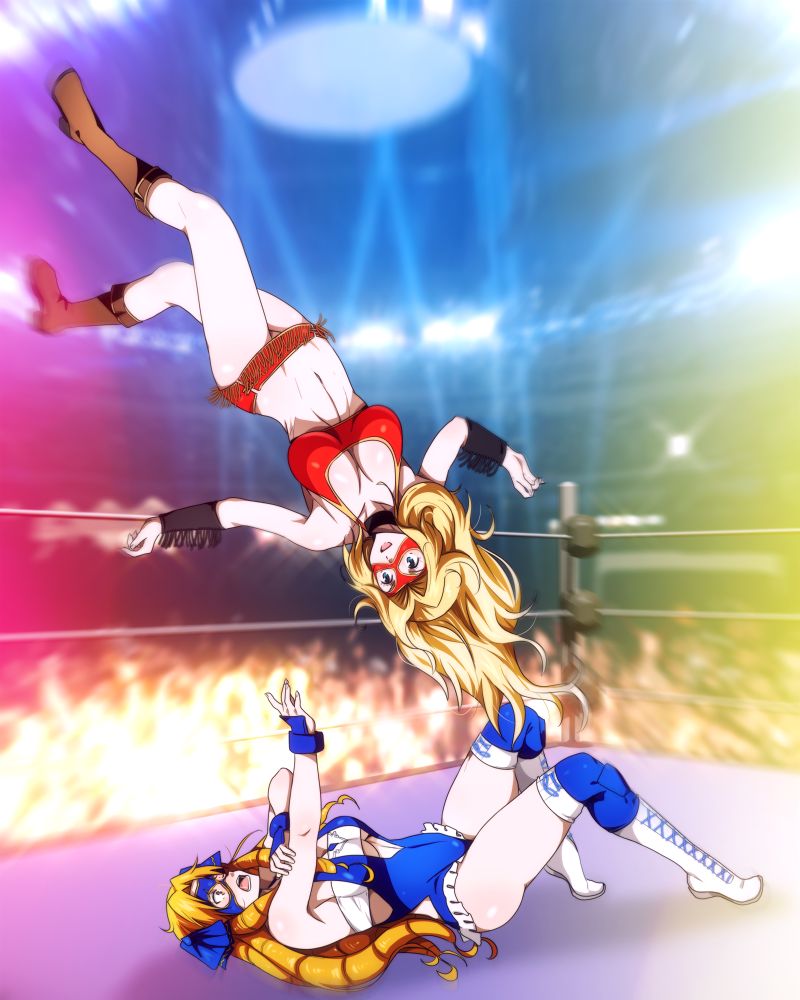 Spoiler:
Great stamina. Could run and jump around the ring all night.

Spoiler:
Good enough for her style, but not a focal point by any means.

Spoiler:
Pretty good, but certainly not her strongest trait.

Spoiler:
Extensive training since arriving in Japan has fixed most of the flaws in her technique and sharpened her up considerably.

Spoiler:
Doesn't have the strongest punch, but her quick legs can fire off some painful kicks.

Spoiler:
Prefers high-flying dives, but did pick up some creative holds during her time in Mexico.

Spoiler:
Can throw a suplex when she wants to. Not something she focuses on much, however.

Spoiler:
The skies are her domain.

Spoiler:
Can get fairly creative with these, especially when given the chance to run or fly in the process.

Axe Kick: Running toward a doubled over opponent, Julia leaps into the air and throws a leg up as high as she can, before bringing her boot crashing down over the back of the opponent’s head.

Pistol Whip: Standing on the apron while facing her opponent’s back, Julia jumps up to the top rope and springs forward off of it, before twisting through the air and whipping the heel of her boot at the opponent’s head and neck.

Overhead Kick: Standing with her back to the opponent, Julia jumps and flips backward, swinging a leg up and over to kick the opponent’s head. Sometimes she uses a handspring into the ropes to launch herself into the kick.

Dragonrana: Julia flips forward off of the top rope and lands seated on the shoulders of her foe, with her legs locking around their head and neck, then flips backward and uses her legs to throw the opponent over and slam them down onto the mat.

La Cavernaria: With the opponent facing away from her, Julia runs toward them and jumps onto them, landing with her boots pressing down on the back of their knees while her hands wrap around their chin. After forcing the foe onto their knees, she pulls back on their chin, bending them backward while pressing their back down over her upturned knees, where she holds the opponent until they submit.

Perfect Lasso: Julia reaches an arm under the leg of the opponent and grabs their wrist, pulling it back between their own legs. She then uses her other arm to apply a headlock while her legs coil around the opponent’s, and rolls backward to put the opponent on their back with Julia on top in a very extravagant pinning combination. It doesn’t do any damage to the opponent, and is difficult to use. But if successfully applied, it is extremely difficult to escape from.

Stardust Press: Julia performs a corkscrew moonsault from the top rope onto the torso of a downed opponent.

Death Penalty: Standing on the top turnbuckle, Julia waits for a grounded and tired opponent to start getting back to their feet. Once they're halfway up, she leaps off the top rope and executes a diving axe kick to the opponent's head and neck. Because of its effectiveness Julia reserves this only for matches she thinks will be among the most important of her career.

Personality: Julia is a very energetic, fun loving woman who just wants to have as much fun as she possibly can. She is also a crowd pleaser, and will go out of her way to make sure the fans are entertained. This is a big reason as to why she uses the style of wrestling she does, and it has also been her downfall in more than one match. She’s very confident in her abilities, but not quite arrogant about it. But though she’s all business in the ring, outside of it she’s very kind and friendly.

Past/History: Julia was born in Albuquerque, New Mexico, into a family that lived and breathed wrestling. Her parents started a wrestling promotion together in town called New Frontier Pro-Wrestling, and raised Julia, as well as her younger brother and sister to have the same passion for the business they did. While attending school, the Rogers siblings all also trained to find their niche in wrestling so they could wrestle for their parents’ promotion someday. Each of them adopted different styles, with her brother building his strength to be the powerhouse, while her sister became skilled as a boxer and focused on quick strikes. Julia, however, found she was gifted with speed, so she decided to hone her skills as a high flyer under the lucha libre style. Julia also trained in gymnastics to help gain balance and precision with her acrobatics. And after graduating high school, she went to Mexico to further develop her skills. It was also there that she got her mask and began to wrestle while wearing it.

When she was 20, Julia returned to New Mexico and finally joined the promotion her parents ran. She very quickly rose through the ranks there, even winning its world championship and holding it for over a year at one point before finally losing it. Julia also traveled through the states, competing in matches in several different indie promotions. However, her parents’ promotion was always her true home, both literally and as far as her wrestling career was concerned. But after four years of active competition in the U.S, Julia received an offer to come compete for the AFW. Though she was initially uncomfortable with the idea of leaving home for an indefinite period of time, her family encouraged her to take the opportunity. So, she took their advice and went to Japan, ready to start the next chapter of her career.

Julia thrived early on, joining the famed Higurashi Dojo soon after debuting and even remaining undefeated through her entire rookie year. She had a brief stint as Entropy Co-Champion alongside fellow Higurashi Dojo trainee Alaina Sanders. The two clashed at Avalanche 2015, where Alaina won to become the undisputed Entropy Champion. But the two remained close friends even after, forming a tag team and calling themselves "Sonic Boom," named for the combination of Julia's speed with Alaina's strength. The two enjoyed a large amount of success as a team, even becoming number one contenders to the Friction Tag Team Championship at one point, though they failed to win the titles. Still she continued to train and grow, but just when it seemed she may be on the verge of breaking through to the next level, Julia learned the indy promotion her parents managed back home was in danger of going out of business. She challenged Valley Doll to be her opponent in what could have been her final match in Friction. It was also the third match between the two, with the previous bouts, one win for each, being heralded as among the best of Julia's career. She defeated her rival in another classic to break the tie in her farewell match, then put her family ahead of herself and went back to New Mexico. There she spent the next two years competing for New Frontier, while helping her family get the promotion back in good shape.

Between training recruits, building them into local stars and promoting the shows, Julia had her hands full. But the hard work paid off, and finally the promotion reached a point where it was consistently drawing good crowds even when she wasn't on the shows. At last able to rest assured that it would be in good hands without her, Julia returned to Japan, ready to pick up where she left off and climb through the ranks of AFW once more.

- Julia’s parents’ promotion held a special sendoff match for her in the main event of the last show she competed in there before she first moved to Japan. Julia, her brother, and sister competed against three of the top wrestlers there. The match was contested with a 60 minute time limit, and Julia hit her Stardust Press to win it with less than a minute left before time expired.

- During her time wrestling in Mexico, Julia went by the ring name “La Vaquera,” meaning “the cowgirl.” She still answers to it as a nickname, but feels more comfortable with being called by her real name.

- Julia is multilingual. Her mentors in Mexico also helped her learn to speak Spanish, and she learned Japanese from Akashi Tanikaze while training in the Higurashi Dojo.

- Julia likes movies, but westerns are by far her favorites, especially the John Wayne classics.