Search
Latest topics
» After a long time I return, looking for a match
by Lilybell Today at 6:54 pm

Strategy:
*Amaya is not a very good wrestler, but training as a maiko(geisha in training) has greatly heightened her endurance and grace in once. She has particularly strong feet and legs for walking over years in Geta shoes and has concentrated her training on kicking and body submissions.

Visual Appearance: Amaya likes to dress in Kimonos of all kinds. Repackage from AFW made the former Maiko more modern and put her into the gothic corner, but still let her wear Kimono. She likes to use makeup and is quite good with it as a Maiko. She uses mostly flat Shoes which are a point of great comfort to her and wears only Geta with her ring attire.

Physical Appearance: Amaya is in the best of possible shapes for her. Her trip to the prison has hardened her up a little bit in appearance. She has a permanent tattoo of the entrance of her old Hanamachi (traditional place for Maiko to live in) in the lower back of her neck, with a nonpermanent bio-tattoo of a heavy chain placed over it by her own design.

Personality:
*Amaya could be the dream of every mother to get her son married to. She is kind, loves children, is humble, spares money for the family, is well schooled, plays several musical instruments and can carry out every duty of a given household. Her trip to prison has tainted her believe in the good of all people, but hasn't destroyed it completely.

Past/History:
*Amaya was born to a young Maiko in a Hanamachi in Tokyo and raised by the Okiya(large family consisting of women) of the Hanamachi. Amaya was a cheerful kid and had a lovely childhood between pillows, butterflies and a lot of nice aunts that cuddled and pampered her in every way.
*The girl was schooled as a Geisha the traditional way as she got 6. Amaya was a quick and fanatic learner of the Geisha tradition and regularly made her mother proud with her dutiful appearance and constant good manners.
(Amaya's mother:)"Being a Geisha is a long way, but Amaya will make it, I'm sure of that."
*Her downfall from the Geisha profession began when she was 17. A male customer put the moves on her, heated arguments went over to a cup of hot tea and a boiled up face of a customer. Amaya was arrested and sentenced to 2 Years in prison for assault with a weapon. Fearing the scandal, her Hanamachi also had to exile her for an undefined amount of time, leaving her a little hope to return someday.
"Two years? What for? For that fat prick trying to rape me?"
*Soft and spoiled Amaya was hardly prepared for prison and spend most of her time in women jail as the bitch of a group of hardened prisoners, pulling her weight by entertaining her *protectors* in any way they wanted from her. At least she learned to put up resistance to an assault(whom she got plenty of), sexual or otherwise.
"Uhm, yeah. Let's just pretend I learned how to, ahm, wrestle with women in prison..."
*After getting released from prison, the AFW seemed to be a good place to earn some money. She knew how to fight, she knew how to please, and she needed a new income as no respectable Maiko House would take her in after serving time in prison.
"It's just temporary until the heat finally dies down and my home allows me back in!"

Wrestling Attire:
Amaya wears a black Kimono and walks on Geta to a given location. She has a black umbrella spanned over her. Her face is chalk white colored, but once sweat gets a hold on her it's just a matter of time until it comes off and shows her real face. She walks around in the ring with the umbrella before discarding it and the Kimono, leaving her in black wrestling clothes like a trouser with skirt elements and a matching top.
EDIT:
After her match with Luna, Amayas clothing and entrance music have been reworked. She now  wears a black body suit with white frills and white suspenders clipped to the body suit. In bed and appartement matches, she will also wear black high heels.
(Booker being interviewed about the gimmick)"Stupid gimmick? Nah, there is no such thing as a stupid gimmick. Take that one guy from that American promotion who uses a jumping cutter as a finisher. His gimmick was that he beat down old wrestlers, and everybody loved him for that. This one will be a hit, believe me... "

Fun Facts:
*dislikes her own entrance music.
*Has cheerleaded in her high school(Tokyo Thunder)
*Is an accomplished masseuse

Appliance photo, directly from the prison : 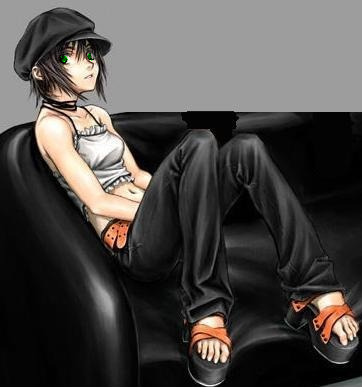