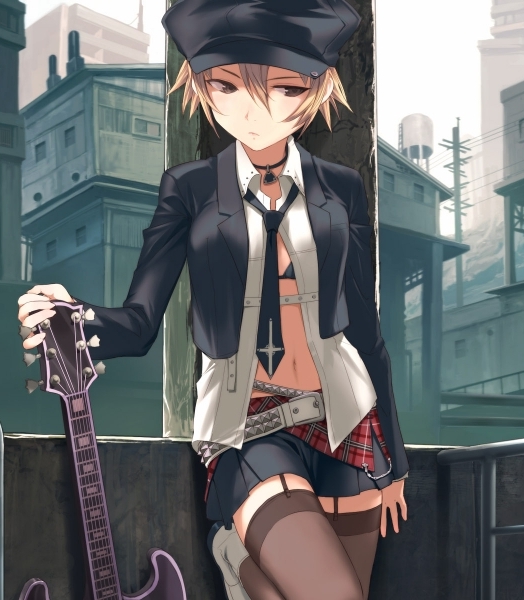 Evenflow DDT: (Snap DDT) Dulsa applies a front facelock to her opponent. Dulsa then jumps down onto their back, swinging their legs forward, bending the opponent, and driving them down to the mat face, forehead, or head first.

Hate Claw: (Aka Iron Claw) Dulsa takes her hand and closes it around her oppoenents face and squeezes hard utill they submit.

Personality: Dulsa is best described as a very Angry and Depressed, Cynical, Sociopath with Sadistic tendencies, dispite her quiet, reserved demenor. She is often seen bearing a very Bitter looking scowl upon her face that complements her bottled up, rage-filled attitude and short temper. However, dispite her Disgruntled looking, outward appearance and firey attitude, Dulsa is actually a very miserable person inside. She seems to suffer from constant depression, which is only worsend by her tenedency to be easily discouraged and her constant self-hatered. She deals with these constant Angry & Gloomy emotions alone, and although she is used to being a loner, she longs for friendship and affection, dispite the fact she Anti-Social at best and has difficulty trusting others. Dulsa seems to fight as a method of relief from boredem and stress and doesnt care about the well-being of herself or her opponent, only the sadistic pleasure she receives by beating down her opponents.Although she has been known to seek out sex as a method of pleasure, she perfers violence.

History: Born a single child to a loving Mother and Father, Eliza Ravencroft grew up no diffrent from any other child in middle class suburban America. Though her well-off upbringing wouldnt stop her anti-social personality from developing in her early childhood, which would make her the target of exile and bullying among her peers as she grew older. Though she came out of her emotional shell around her teen years, Eliza was doing no better. She was now going down the path of a bitter and rebelious wild-child, who often got into trouble for fighting and vandelising on several occasions, and it wouldnt take long before her parents got tired of dealing with their uncontrolable daughter and kicked her out of the house for all her reckless behavior. Dispite being all alone in the world, with friends who cared or even a family. Eliza couldnt find a reason to care and figured she'd find a way to live in this miserable world somehow. A year later, after travelling from town to town searching for steady work, while recovering from an abusive relationship, Eliza fell into several cases of clinical depression and emotional breakdowns, that seemed to worsen day after day. Although she had eventually recovered, these breakdowns had taken their toll on Eliza and forever changed the girl into a bitter and sorrowful cynic who had lost her sense of living. By the age of 18 Eliza was fighting in various undergound fightclubs and eventually wrestling promotions. By the time she turned 19 she got a call from AFW, offering the girl a contract. Eliza accepted, not really caring where she would end up in this miserable world and headed to japan, discarding her given name in favor of the first name should could think of... "Dulsa". A meaningless title for someone who had lost all meaning.