Past theme: Destruction - "Thrash Till Death" 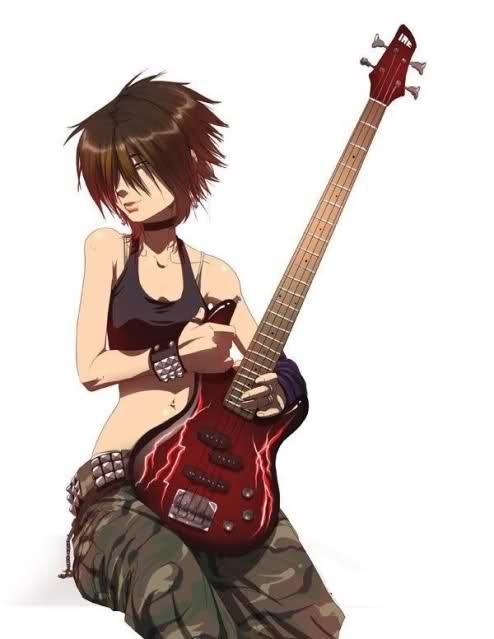 Personality:
Rowdy, loud, foul mouthed and overly destructive, Andrea is a rugged, charismatic and energetic Metalhead who loves Heavy Metal with a dying passion that could only be matched by her love of guitars and inflicting pain onto others.  She's an ultra-violent maniac with a thirst for mayhem and brutal combat.

History:
Andrea  was the love child of two crazy rockers who lived it up in the 80s with late night parties jamming to every hair metal band in existence. But by the early 90s, Glam Metal was gone and the couple settled down to have a child, Andrea, whom was destined to be raised by rock, taught to worship Motley Crue and go to sleep when her parents sang her lullabies of classics rock ballads.

Despite coming from a home with two people who valued their appearances very highly, Andrea was rugged from the start, she hated dresses and was always one of the boys in school, she liked picking fights with people and got as rough as she wanted too when they played football outside. But as the girl grew older, she found a dissatisfaction with cheesy glam rock and how effeminate it was leading her to seek out faster, heavier and more aggressive sounding types of rock music, ranging from hardcore punk, to classic heavy metal and eventually Thrash, which inspired her to pick up an actual electric guitar and practice whenever she could, eventually joining a local local thrash metal band called "Shred-Bastard". However after the band split up, Andrea wasn't able to land a gig anywhere because everyone was scared to work with her. Andrea was frustrated and was reluctant to get a real job. All she wanted to do was play guitar or kick ass.

One day she discovered a local hardcore wrestling promotion and was hooked instantly, falling in love with this brutal style of combat. Andrea wanted in and joined at an open invitational tournament which she managed to win by relentlessly using weapons against her opponents. She discovered that inflicting pain onto others was her calling and loved the feeling of striking people with foreign objects.

However, as fun as it was, Andrea didn't always make a lot of money at the hardcore promotions and tried to other promotions. She found limited success, winning all her hardcore matches but barely winning half of her Standard matches against trained grapplers, thus prompting Andrea to get some training to learn the basics of pro wrestling so she could have a better chance at competing in the sport, she did a lot better after learning wrestling techniques and eventually caught the eye of recruting scouts for AFW who were searching for more hardcore based wrestlers. Andrea accepted immediately.

Headbanging Hell: (Andrea grabs her opponent with both hands by the throat and begins a massive assault of Headbutt's till one of them is knocked out)

Metal Horns Eye Poke: (With her Index and Pinky finger she'll form the classic "Sign Of The Horns"  '\m/'  and poke her opponent in the eyes)

Acoustic Thrash: (Andrea grabs a an acoustic guitar and hits her opponent across the head with it.