Just a Social Call (For Berial)

Just a Social Call (For Berial)

The caramel-skinned man settled into the chair of the booth of the izakaya by a fairly huge window in an unassuming corner, where the approach from behind was cut off, taking a quick horizontal glance around at the populace. Seems the business here was decently slow, given it was a cold Saturday night. Despite that, he'd chosen to dress in his Sunday's best. A three-button, black two-piece accented by a dark red tie. The same extended down to his pants which were the same color as his upper quarters. The eyes that framed Hiroyuki's face were inquisitive and of a dulled golden color, barring the dark edges around his eyelids.

Hiroyuki palmed the magazine at his side on the seat. His fingers curled around a certain page, lifting the reading material before planting it squarely on the table and flipping into onto the correct subject he was looking for. The lastest issue had caught his eye because among other matters it detailed the imperative answer of who'd be running Momentum. That was, as one may guess, one of the two promotions he'd be competing under. His night job, you could say.

Hiroyuki's gaze scanned through the lines of text, taking it in with as much genuine 'enthusiasm' as one could when he was waiting on another. Yes, he had not come to this bar to drink alone. Furthermore, Hiroyuki had enough impulse control to avoid running up his alcohol bill feverishly but the woman of the hour who he previously called for a required appointment of catching up did not arrive yet. So, he was coerced into waiting. In such a meantime, a server had walked to Hiroyuki's booth to take his order if he was ready. He favored a drink at the moment, so he spoke it out as an apple-flavored glass of liquor. Most of the basic beverages tastes akin to dog's water or paint thinner in his opinion. One minute and a quarter finally dragged on before he recieved what he wanted. It had a cost, he already knew that, while pulling for two 1000 Yen notes from his wallet. One for a tip and one for the drink itself. The youthful man gave only a slight bow in gratitude before shifting his stance to walk off and attend to the other customers. Hiroyuki's outstretched hand curled back into a soft fist which he put back on the magazine. He let the alcohol rest there, only having wanted the drink to be ready for him so he could commence the party when Sae arrived.

Concerning the issue, the "promotional" picture of Elizabeth had caught him by scoff-worthy surprise. If his thoughts were allowed on it, Hiroyuki would conclude the executive's conditioning to be similar to shaved marble. That wasn't an insult. She looked very pleasing to his eye and he could begin to admire that physical and mental drive she talked about while he read along the pages. That quality was what had gravitated him towards Yamamoto in the first place. She was worth getting to know better, at least.

Business of Kings, Knights, and Liars: 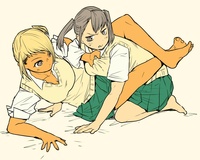