Gob-Gob noticed Hathiya lean down and just assumed she wanted a better look at him, but instead, she tussled his hair with her trunk! His pointed ears dropped down a bit as he quietly purred from the feeling of his hair being gently pushed and pulled. Of course, the young goblin perked up when Hathiya began explaining how she came up with the move in the moment. An unheard of story where the champion took the earth and flipped it upside down? It certainly was interesting, and every species had their folk heroes and stories. Even Goblins had heroes and monsters in their stories. Gob-Gob could only imagine what kind of powerful heroes Hathiya looked up to.

At the mention of her strength, Hathiya brought her massive arm down, letting him feel her bicep and arm. The young goblin was hesitant at first, but with Hathiya’s assuring eyes, he reached over to feel. Instantly, the goblins' eyes began to sparkle like he was holding gold! Her arm was stronger than steel! His small fingers gently squeezed and pushed Hathiya’s tough muscles, feeling hardly any give at all despite the fact her arm was still relatively relaxed. The Earthshaker might have noticed that Gob-Gob’s fingers were a bit rough from calluses, the goblin something like a hard worker.

“W…Wow! I’ve seen explorers who were only as strong as this arm!”

When Gob-Gob looked up, he noticed he was accidentally tickling her. Letting her arm go, the goblin sat back down in his seat.

Hathiya chuckled at hearing "workout" and explained, "Well, you're right. I need big workouts, and back home, I did it with fallen trees, junked cars, and other big piles. The SRW has been kind enough to give me some real big loads to work with! Cars, trucks, wrecking balls..." she counted them on her fingers, then looked down at the crowd behind Gob.
"Oh boy, a few of the people seem to be getting antsy." Hathiya wrapped her trunk around Gob's waist, lifted him up, and gave him a smooch right on the face.

A car? A wrecking ball?! Honestly, that's something that should have probably terrified a small creature like a goblin, but all it did was make Gob-Gob picture it and think Hathiya was even cooler. Unfortunately the sounds of the crowd were starting to get antsy. Gob-Gob figured he was probably taking too much time. Hathiya must have noticed too, politely mentioning it. This was just a meet and greet.

“Yeah, you're right. Sorry about th-woah!”

Suddenly, Hathiya’s trunk was wrapped around his waist, easily picking him up off his seat! Before he knew it, she planted a kiss on his cheek, suddenly silencing most of the antsy crowd. Gob-Gob suddenly turned a slight shade of red from her kiss, and even offered him a picture if he wanted. A bit stunned, the goblin nodded his head and pulled his snap device out of his pocket. Eros smirked, proud that Hathiya probably just made a fan for life.

After the picture, Gob-Gob shook Hathiya’s hand with a smile.

“I-If you're ever in the market district and you have some time, drop by the green garden stall. I work there and…it would be cool to give you a discount for the picture~”
_________________
Tarantulust's Lair

Hathiya smiled, giving a light wave. "Keep the picture, it's my gift to you!" Then she shot a finger gun at him. "I'll see you at the market."

Gob-Gob left with stars in his eyes, rather excited from his encounter and looking over the picture he snapped of Hathiya. He was grinning ear to pointed ear, clearly excited with the idea that the Earthshaker may visit his workplace at the market. To say he was a happy customer was probably an understatement. It made the Head Warden curious how she would please this next customer, who strolled up to the Elephant woman with a strange gait. This customer seemed to be a woman, her face wrapped up in medical bandages with a single red eye looking at Hathiya. Their eye inferred that this was most likely a ghoul of some sort. A being that feasted was undead, but noticeably different from a zombie. Ghouls only ate decomposing flesh rather than living, making them no true threat. Ghouls had slightly increased strength, and enough intelligence to talk, but it was rare to see very many in one spot. 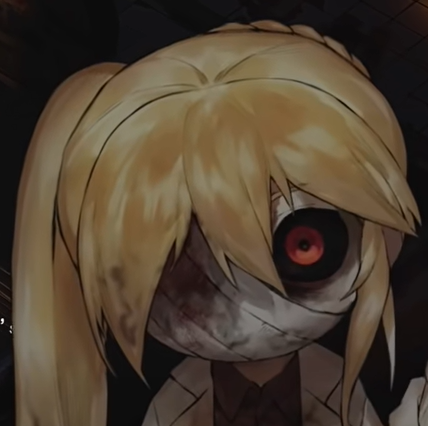 Despite being female, her voice was very muffled to the point that it sounded deep. Her broken greeting seemed less like she was nervous, and more so distracted as she waved her arm at Hathiya. Unlike the goblin, the ghoul had no trouble getting in the seat across from Hathiya, that red eye peering at the Earthshaker like a doll on the shelf. As eerie as the ghoul seemed, she didn’t seem malicious.

Was that a joke? The Ghoul’s shoulders shook gently like they were laughing, but no noise came out. Morticia offered her hand to shake, that one visible eye seemingly smiling.

Hathiya looked at the ghoul with curiosity, as she looked at her gaze back. There was something mesmerizing about her eye she was fascinated by, and hearing Morticia, Hathiya gently placed her hand around Morticia (it being large enough to envelope around her) and said,

"If the universe himself is laughing at you, I'll have a word with that naughty man later..." she said in a tone of a mother telling her child she would go out to beat up her bully.

Morticia looked at Hathiya’s large hand enveloping hers. The Earthshaker’s fist was probably around the same size as Morticia’s own head. But it was so hard to be scared when Hathiya spoke like a concerned mother, giving a sort of peaceful feeling even to an undead like Morticia. For a moment, Mortica seemed to simply be enjoying Hathiya’s words and the warmth of her hand. But eventually, the ghoul’s piercing eye would peer up at Hathiya once again. Morticia’s distracted nature made it seem as though she were looking past Hathiya, though those eyes seemed to be peering at the Elephant woman’s core.

“I saw…your match. You’re big…strong…and a little…” That bright red eye looked down at the table, “scary.”

The Ghoul tilted her head at that last part. The word “scary” was said in a lower tone than the others. Perhaps she was embarrassed to say something like that to the kind stranger that just offered to fight fate for her. When Morticia’s eye looked back up, it was just as doll-like as before. The hand inside Hathiya’s grasp gently squeezed one of her fingers, the action hidden from the crowd.

“But…people cheered for you…They like you…don’t think you're scary, and…even visit you here. You’re…beautiful! So I…I wondered if…if you could help people like me…make me less scary.”

The ghoul suddenly shook her head, suddenly scratching at her bandaged face,

Hathiya felt Morticia's hands squeezing on her hard, stone-like fingers. Looking back at the girls gaze, and seeing a similar glow in it to her own orange eyes, she gently wrapped an arm around her, and picked her up, bringing her closer to Hathiya's head. Hathiya gently whispered,

"I understand your pain, Morticia. Where I came from, a lot of people were scared of me too. It's not easy being a titan, because every step I take could destroy something if I wasn't careful. It....was scary. It was scary being me...."

"But hear me on this." And she gently hugged Morticia, placing her head against her cheek.

"No matter what, the last person you should be scared of right now...is you. Because as long as you are afraid of yourself like this, others will be afraid of you. Be strong. Be brave."

And with that, she gently put her down again, smiling.

"Because with that bravery, when you get over your fear of yourself...the most honest and best of friends will come to you. And they won't ever be afraid of you either. And you...they will see you for what beauty you have...in soul."
_________________
Dat ARS

Morticia didn’t know what to expect. Beauty tips? Manipulation tactics? Or maybe just a surefire response that there was just no helping her. She was a Ghoul. A creature that was synonymous with evil in most cultures and species and one that ate the dead. It didn’t matter that many species devoured cooked, dead meat like her. Everyone pictured her kind digging into graveyards with bare hands like savages waiting to eat their loved ones' remains. Her red eye, pale skin, and undead status made her scary to so many in Gaia that almost everyone avoided her.

So being picked up was a new sensation. It was strange, being free from gravity as Hathiya picked the Ghoul up. Morticia barely weighed anything, even with Hathiya’s immense strength. She must not have been eating recently.

Being brought close, Morticia seemed to flinch. Nobody had gotten so close to her without screaming. But Hathiya came so close, whispered in Morticia’s ear. The advice was brutal, but honest. There was no easy trick, no miracle cure to change everyone's opinion. But the last person that should be afraid of Morticia was herself. People respond to an individual's feelings, and if she is confident in herself, friends would come.

It gave Morticia something to think about. When the Ghoul was set back down, she seemed even more like a doll than before. She looked back and Hathiya, there was something slightly different in her gaze.

Hathiya bowed her head, and lovingly rubbed her chin with her massive fingers. She could feel for the ghoul, and her lightweightedness was something she felt. She really hoped Morticia would find the friends she deserves one day.