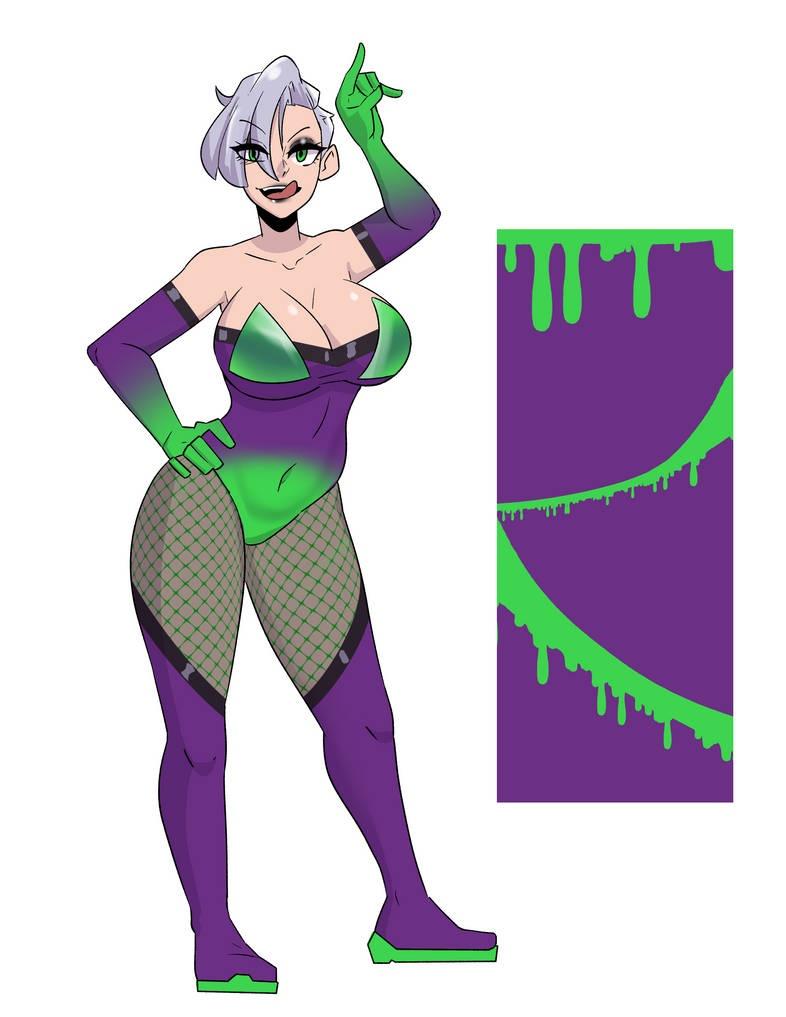 Personality: Lydia has always been someone that likes to get what she wants when she wants it. Growing up without many opportunities or privileges Lydia learned to covet those that she did obtain… to the point that she’ll knock down any who get in her way. In turn however Lydia is rather savvy, not only in the ring but in day to day activities and business as well. Finding clever ways to make thing work for her, even if she has to manipulate others to do so. However when plans fall through or her machinations fail, Lydia does tend to get… explosively aggressive and violent. Lashing out at those that get in her way with vindictive fury.

Wrestling Style: Lydia is a patient and methodical woman. She knows how to make the most of  her offense when she can get it and prefers simpler moves that can easily be used in multiple ways. As a result much of her offense is based around waiting and countering offense with her greater strength and stamina. Either catching girls out of the air, overpowering submissions, or matching women her size. Once she has a opening she utilizes simple but efficient moves to apply damage over time before finally finishing her opponent with a powerful fijisher.

History: Lydia grew up in Seattle, Washington rather poor, with her mother having to work two jobs to make ends meet and her father leaving at a young age. As a result everything was something of a struggle for Lydia and her family, she didn’t have what many other children did, she couldn’t gondo the things others did, and she sometimes went to bed hungry. It was a hard life that left her jaded and cold, not just to others but life as a whole. It left Lydia wanting more constantly, more things, more food, more money to make it all happen and maintain.

However the question remained how? Despite managing to finish high school easily enough they would have no where near the money neccessary for college. Even if Lydia had received multiple scholarship opportunities due to being heabily involved in atheltics, but none would be enough to cover college on their own. Not without taking out loans that would leave her and her mother buried in debt forever. So one night while weighing her options before her just before graduation Lydia came across a flyer for a wrestling promotion. One that would offer a cash prizes to those that competed.

Obviously interested Lydia decided to wt least gonand check it out, not to compete, at least not yet. But to gauge whether it would be worth her time. So the young woman did so, and admittedly she was quite taken with it all. The outfits, the way the wrestlers moved, the sheer freedom in which they did so, it was quite appealing for someone that for all intents and purposes lived her life the opposite of that.

During this event one of the wrestlers who was a veteran at the time made an open challenge for any audience member to challenge her. Naturally Lydia raised her hand, feeling no fear and a eagerness to potentially take part. Now despite her complete lack of experience or training Lydia held her own… for a few minutes. Notably she if nothing else had an impecable athletic body and was able to keep up amazingly weel with the vet before being caught and put down, but not before showing immense grit and determination from having kicked out of multiple pin fall attempts.

So naturally disappointed with her loss Lydia prepared to leave the event… only to be stopped by the veteran she had wrestled. Understandably this vet had expected a two minite squash against an audience member and to not go too hard on them. However Lyida having given then much more of a fight than anyone expected left quite the impression on her, so the woman offered toneach Lydia if she wanted to become a wrestler herself. For free. So naturally having gotten a taste of the life she so wanted agreed.

The new few months she spent learning and training under the woman, eventually debuting and making quite the name for herself in a short amount of time. Lydia’s true breakout moment though was during a massive tournamentfeaturing some of the best wrestlers throughout the northeast. Eventually the finals came down between Lydia and her teacher… and during this match Lydia did what no one expected and low blowed her teacher bettwying her by cheating to win the tournament and catapult her career to new heights.

After the tournament Lydia traveled not only around the US but the rest of the world as well, Mexico, Europe, and even Japan, Lydia hit all of them and had rivalries and battles with some of rhe best in the world, earning accolades across the board. Over time she even branched out into other fields, boxing and mma and winning big there, using those skills to better her wrestling career as well.

Even at the age of 21 Lydia  had ammassed a good amount of money which combined with some smart investments led it to increase higher. Something that happened at the perfect time since it was around this time that Lydia became pregnant with her first child… or rather children since she had twins. Despite that and the time and stess thst comes with children Lydia continued to wrestle, amassing more money which she invested into various projects, becoming wuite the bussiness woman over the years.

Eventually at the age of 30 she retired from professional wrestling. Choosing to focus on her family for a while. Not only raising her kids and taking care of her mother but also running her various business escapades. For a while things were fine like this besides a divorce from her up till then husband. But as a distraction for her children she began to teach them how to wrestle as both had shown interest in the sport and she was more than happy to pass on her knowledge.

Recently however… she’s been bored. Extremely so. All of her investments have paid dividends and are at a point where they need minimal attention. Likeiwse her children are practically adults and preparing to make their debuts as wrestlers. Leaving her with… nothign to do. Well… so she thought. But it occured to her while watching a wrestling program one night. After all she kept up with the sport that gave her so much but the thought that occured was… why not just come back? Many women her age did so. Likewise she would be all top happy to show these new girls what a veteran could do… and she certainly wouldn’t mind adding to her title collection while aiding her children.

So… after a brief bit of research Lydia found a new home for not only herself but her children as well in Japan. Her mother woild stay behind in Seattle ar her old house while Lydia in the kids went to join one of the hottest wrestling promotions in the world… AFW