Yahagi excitedly hopped in place in the ring. It was a good night; the best kind of match presented itself. One as much reliant on strength and skill as it was sensuality and intimacy. The sort of excitement it gave made most of the preceding hours a blur; blathering to agents, ignoring the sultry titantron, kind of putting in the same skip to her step as nearly every other time she was going to a match. All of that was important whether as boring logistics or part of her presentation.

That wasn't why Yahagi wrestled though or why she wore a one-size-too-small black bikini, seeming like it might snap if her perky, bouncy breasts grew too erect or her powerful muscles flexed a little too hard, the white that outlining it looking like it might be swallowed into the soft, fair skin of the Japanese beauty. The black of her bikini seemed almost too modest a colour over her nethers and breasts, as if they were muting something far lewder; as lewd as that strong, toned body as voluptuous as it was athletic.

Yahagi wrestled because mostly, she enjoyed the feeling of other women pressed and struggling against her body, as much as she liked them giving in.

Tonight, she was wrestling a girl who while not 100% the type she preferred looked promising. A newbie wrestler if she remembered correctly; still slightly curvaceous but with a solid layer of muscle beneath. How solid exactly?

As Reagan entered and looked to the ring, the flexed abdominal muscles of Yahagi might be the first thing she saw. Muscles that Yahagi very much liked to show off especially to her opponents.

What had Randee gotten herself into tonight?

She supposed to be more precise, what had AFW urged her into tonight? They pitched the model so persistently on this match they proposed because they swore it would garner the utmost attention and because they especially offered her a chance to wrestle in it over so many other women. They talked it up so much that she felt internally committed to it before she heard the actual details. Oh the details were a lot more intimidating even if she did not give any hints to her intimidation when she stepped onto the stage in a sunset print bikini with her abs on display.

And most of her really. She was nearly certain this one would not fall off, but her full figure would have its way. She wore it with confidence and flexed on stage as she always did, earning a huge chorus of screams. She grinned, pretending for them that she did not battle with doubts.

This was a body pressing battle. It sounded titillating enough as it was, more titillating than what usually fit in Randee's wheelhouse, but that was before they told her she had to wear a bikini. Or that she could lose if she came. Or that she would not have the luxury of any rope breaks. Oh God. It all washed over Randee again as she strolled down the ramp, forgetting to pose for her photographer until she was almost to the ring.

When she did pose, she had already caught a glimpse of Yahagi. A highly renowned internet model who often wore bikinis did not get stunned by many people in swimwear, but that black bikini on that chiseled body struck the blonde.

She did not know a great deal about Yahagi, since many details had been dropped on her at the eleventh hour, and that worried her. The girl oozed confidence as Randee joined her in the ring. And she looked stronger than a coiling python. Randee did not look too closely at her as she went to wave to the crowd still appreciating her in a bikini. Mostly because she chose to think this match, for all its frills, would turn into a mostly normal match save for some extra body contact. And that Yahagi would keep to that plan to keep it normal. Misplaced hope was still hope right?

Randee turned to her with that hope. She supposed AFW administration was right. People watched when two bodies like theirs were about to clash. 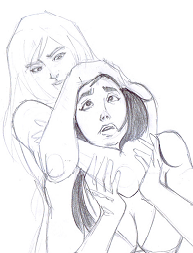 "Never had to tame a woman with your body?" Yahagi replied, casually leaning onto the ropes opposite of the blonde, the stretching of the boundaries against her back giving Randee an impressive view of the colums of armored muscles she'd be facing down in the match. "Or maybe you preferred to be on the receiving end. No shame; this body's for battle and pleasure."

She wasn't disappointed by Randee. The images didn't do her justice, likely edited to mute the effect of the very deliberate curve-tinged musculature that dotted her body. She was notably smaller than Yahagi by a few inches and she suspected more than a few pounds. Pounds that she knew were mostly carried in the actual toned build hidden beneath the instagram-model thick body that would rake in reacts and comments like a harvest. Randee however, seemed a little tense.

Yahagi smiled; this was going to be fun. Something about her actions seemed... choreographed but slightly off, as if she'd deviated from whatever script she'd followed mostly to not so subtly feast on Yahagi's impressively built body.

Sashaying forth, chest casually bouncing in place as she stretched her biceps back in a casual stretch, her mounds oh-so-innocently brushed up front-to-front with Randee as she stood head to crown with her, head tilted down as her tongue moisturized her own lips.

"That tummy is a little softer than the kind of meat I usually grind but maybe you're here to prove me wrong~" She continued, casuallly leaning her shoulders back as her abs pushed forth, all but offering that Greek statuesque body to taste. Camera flashes intensified behind Randee. She moved it in an undulating motion, her chest brushing to the top of Randee's as the bell rung. "So... want to have a taste?"

She raised her hands to offer a test of strength, proudly puffing out her belly, hoping to start this match off very intimately.
_________________
Add me on Discord: LunarOcean#8452

Similar topics
» The Huntress and the Humped - Yahagi vs Hajna
» Yahagi vs Anubis (LunarOcean and Daaharu)
» A Mighty Return!: Nanako Fujimoto VS Mighty Yukiko
» Seaside Squishfest - Yahagi vs Saskia
» Ponytails and Pins - Yahagi and Naya