Match Rules: No DQ, win via any means

In the back of the Friction locker rooms was Isabella Astley, the white haired adoptive daughter of the renowned Machiavellian Queen Courtenay Astley. Ever since coming to Japan the pair had been wasting no time in bringing their western style of pain and pleasure to those that visited their mansion of burlesque entertainment, they'd been also at work in regards to bringing about wrestling into the mix. Many a weekend had a form of wrestling that was similar to what one could see at Friction or Tension, yet catered to the rookies that were scared to sign up. Plus not to mention the new staff that was hired on, they had to spar against Isabella to make sure they could handle themselves just in case~

Yet the Astley's were by their nature ambitious, and thus it wasn't long before they'd make their actual in ring debuts. They'd been based in Kyoto with Tension as their main goal, but certainly weren't above venturing to Tokyo to establish their dominance either. So it was that the Most Loyal One would be preparing for battle here tonight, in front of the large crowd. It was rare indeed for the white haired warrior to venture out so far away from her home, yet for Courtenay she'd go to any lengths. Currently in her locker room Isabella was resting her head on Courtenay's lap as a servant used a large fan to bring a nice breeze to the pair.

"Now my dear Isabella~ Its time for you to strut your stuff! I want to see you demolish this fool, go wild! Take all that pent up anger I know you have and unleash it, now run along now and have fun dearie!" Courtenay said as she brushed Isabella's hair before sitting her upright and then patted her back, the Machiavellian Queen was keen to see that her ward would be capable. She was never afraid of a bit of bloodshedding as it were so this No DQ match would serve her well! 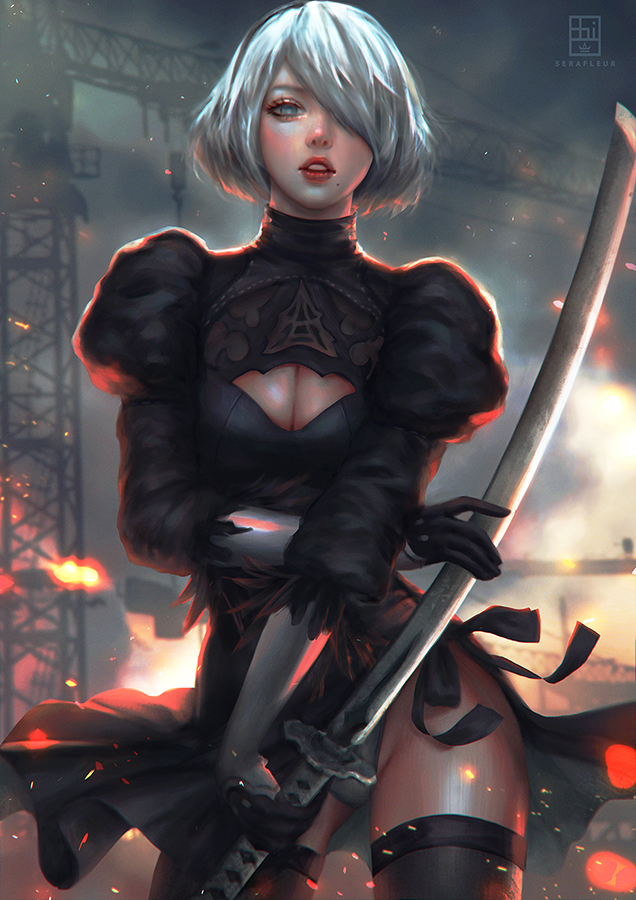 Regardless it was go time, Isabella simply muttered out with "Understood. I shall destroy them......." with that the Most Loyal One stood up, taking a brief moment to turn her head to Courtenay and say "After this.......I want that Ken Kaneki plushie I asked about." her quiet love of anime shining through, she left to the sounds of a chuckling Courtenay behind her. Now Isabella would be focused, she kept a straight walk through the hallways to ignore the niggling feeling of being out of her home as best she could. The arena lights would dim out to black, before the opening tunes of Let Me Carve Your Way would blare from the speakers. Then the lyrics hit as Isabella slowly sauntered out from a fog of purple smoke produced at the entrance.......

"I once had some sweet memories
Its worth remains the same
How can I remember those moments, sweetheart?
They should have been right there....."

Isabella earned many catcalls and whistles, some of the audience had been to the mansion clearly. Regardless she didn't give one thought to the peanut gallery, for she had a mission to do.......Demolish the one that dared to face her, Isabella would promptly leap up to the apron and jumped over the top rope into a forward roll to crouch in the middle of the ring and slowly rise up calmly to bely her inner rage.....


Isabella would walk to the far right corner and lean against the turnbuckles, her black veil gaze looking down at the mat as she folded her arms. She gathered her hatred, her inner anger to the front. Intent on unleashing it and prove herself as the Most Loyal One here tonight.......
_________________
Check out my wrestlers here, but PM me for match requests.

The golden gaze of the bloodlusting woman looks at the monitor, admiring the figure and beauty of her opponent. To Daji, Isabella looks a fun toy to play with before breaking. Her tongue slides along her lips with anticipation, awaiting her theme to play.

As her ominous begins to play, she starts her strut out to the ring, appearing right as the music’s tone goes hard. 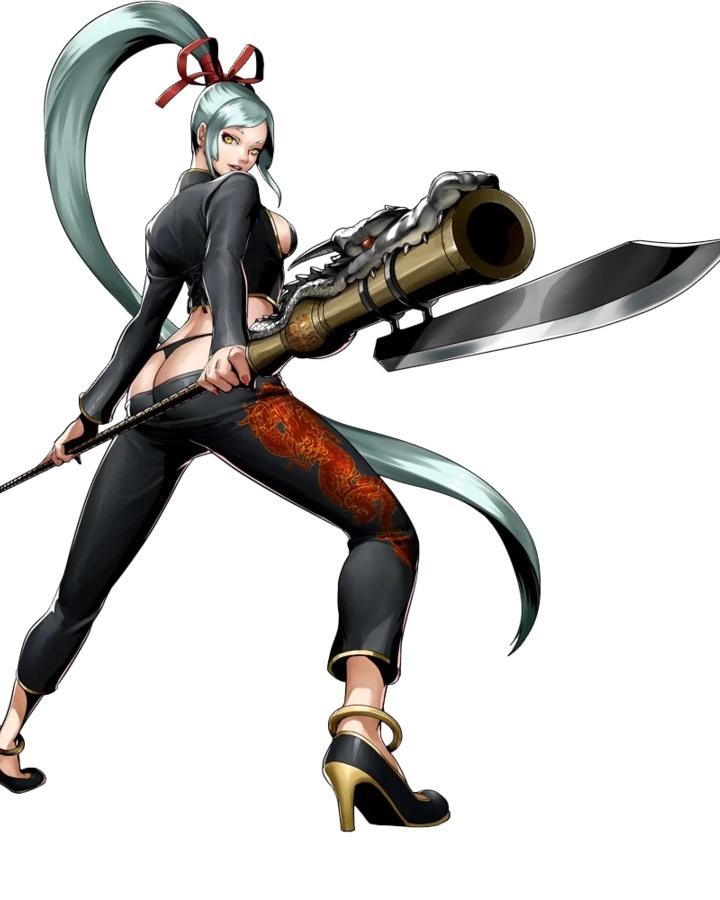 The seductive woman in her tight, revealing attire causes whistles of the masochists to reign down on her as walks down the ramp, taking little time to aknowledge them. At most, she simply waves them off rudely while eyeing her foes bod, imagining the evil things she can do to rock her body into submission. Chairs, chains, kendo sticks. So much to choose from beneath the ring, but its more fun to use that stuff after already humiliating them.

The silver-haired woman steps through the ropes slowly, enough for the camera to get a good view of her ass, not that every other shot already captures it anyway. Daji simply stands at center with her hands on her hips, looking to the crowd that cheers and boos her before wandering her sight towards Isabella. She flirtatously gives her wink before struttibg to her corner, leaning against it whilst licking her lips again. Like what she did to Grace, Daji will show no mercy to the pretty lady in front of her and devour her will with unquenchable thirst.

Isabella heard some music playing and narrowed her gaze as her opponent walked into the arena, huh. This chick looked fancy at least, was she trying to one up Isabella here? The Most Loyal One simply kept a neutral expression on herself at the moment, letting those dark feelings of hers stew for the time being as she sized up her opponent for this evening. *Taller than me looks like, proud to show herself off. Need to watch out for those legs.* Isabella thought to herself, now that she was getting into a fight the Most Loyal One got herself out of her corner and calmly balanced her hands on her hips as she looked Daji up and down.

The white haired maiden figured she could get a good time out of kicking the shit out of this bitch, the lady didn't even need to open her mouth for Isabella to already be wary of her. Isabella simply scoffed as Daji winked at her, the Astley lived and worked in a burlesque house. It was going to take way more than that to try and unnerve Isabella here. In fact Isabella simply hissed as she prepared to get herself ready for this bout, the maid would start bouncing about on her heels in anticipation for the bell to ring!

That was it, it was go time here already and Daji was going to get a first hand taste of what the Astley's could offer in terms of pain over pleasure. Wasting no time Isabella would bolt right out of the corner in a way that only a practised gymnast could, busting out into a series of cartwheels and spins to build up momentum right before trying to dropkick Daji right in the chest for Isabella's opening gambit at the start of the match!
_________________
Check out my wrestlers here, but PM me for match requests.

As soon as the bell rang, her opponent starts coming at her already with a barrage of cartwheels and flips. Nice view of her upskirt in that white thong Daji thinks, also believing Isabella is either overly confident or absolutely stupid to flashily come at her directly at the start.

Just before the dropkick could land, Daji simply steps to the side and lets her flop. Immediately she grabs Isabella’s feet while she’s face down and lifts them up, causing her skirt to reveal her shapely lower-half.

“Wow, what an amazing ass you’ve got there.” Daji teases, as her opponent attempts to kick from her grip. “I’m loving the view, but your sexy ass needs a punishment.” She lifts her leg and plants a stomp between the white-haired woman’s crotch, before dropping her feet to watch her squirm.

“Hahaha! Maybe if you spent less time flipping, you’d be in a better position.” Daji grabs her by the hair, trying to stand her up and throw Isabella to the corner. If successful, the sadistic fox would run at her and slam her big butt directly into her opponent’s groin.

Isabella was relentless in her swift approach, this was her usual standard opening in an attempt to leave her opponent confused and gasping for any sort of clemency here. Alas it seemed as though Isabella's foe for the evening was a very, very crafty lady in her own right as Daji from the crowd's perspective didn't seem the least bit terrified! Isabella's dropkick would come up short there as she hit the mat with a thud, allowing Daji the chance she wanted to heft the most loyal one by her feet to let her skirt dangle.

Rather than be embarrassed however Isabella snarled and tried to kick her leg at Daji in frustration. Only to then be stomped in the crotch area! The Brit hissed and writhed in pain, it wasn't the first time she'd been hit there but damn that still stung like fuck as she muttered "Nhghgh! Damn you!" as Daji then decided to grab her by her snowy white locks of hair towards the nearby corner.

Whereupon Daji decided to try and continue her assault here and assert herself in the opening of this brutal battle, the other white haired lady would then ram her hips right into the assaulted groin area of the most loyal one! Isabella would hiss and writhe as Daji was in front of her there. Still out of desperation formed from the pain Isabella decided that it was prison rules here, Isabella had to try and do something here and she resolved on a dirty trick of her own as she tried to swiftly poke Daji in the eyes and harshly shove her away as she tried to nurse her damaged lower regions!
_________________
Check out my wrestlers here, but PM me for match requests.