When Nicky Gunnery came to Momentum, her contract very clearly stated she was joining a boxing promotion to box other boxers in BOXING matches. In 10 oz BOXING gloves. In a BOXING ring. With a pre-determined number of rounds taking reference from the international unified BOXING rules. With victory determined by either a judge-mandated decision or a finish. BOXING judges, she might add. There was no ambiguity there. She was here to box and so she did for a few good months. Boxing was had. Boxing was conducted. Boxers boxed. Good ol' fashion boxing soaked these Asian halls.

But in the words of Darth Vader from that old movie where every bad person was either a brit (Not very culturally sensitive) or an evil slug (not very sensitive to Italians either): "I have altered the bargain. Pray I do not alter it any further."

And so overnight, Momentum opened up to martial arts beyond boxing. Muay Thai, Kickboxing, too many things with Gis and weird belts. She swore she caught a glimpse of a kendo match where one of the competitors legitimately tried to behead the other. Very 18th century. It was a whole new sodding world she had found herself in, and Nicky wasn't completely sure how she was supposed to take it. Betrayed? A bit. Curious? Definitely. Excited? Quite, quite. Lots of emotions and even more questions. Chief of all how the frickin progression up the rankings worked now.

Oh, you know what else opened up?

A bunch of boxers weren't exactly thrilled with how the shift in Momentum went down. No forewarning and a dozen breaches in contract clauses soured the mood quite a bit for anyone. Nicky had been asked to lend her voice to it by an old frenemy called Elena, another boxer who had joined Momentum around the same time. She should. She really should have but...

Try it before you knock it, right?

So here she was in, walking down a ramp to a ring that looked a little too long. The dimensions were off. She wore her usual black sports bra and red-blue shorts - and nothing else. No Gloves. No boxing boots. No nothing. Just bandages over her hands and... nothing. She felt naked. She felt very naked, as if she was walking into a fight with nothing on.

What the frick was Lethwei? She read the rulebook and it still felt like street fighting with extra steps. Unneeded steps.

Okay, fine, whatever. She consented to this. The lawsuit was still an option if she was done with this. She walked to the ring, didn't even bother lifting her fist up. Her hand felt bare; empty. No weight to it. She went up the ropes and found herself grasping onto them for the first time in her professional career, free of the gloves. She hated it. It felt wrong. This whole thing felt wrong. The floor was cold. The cushioned canvas of the ring felt cold too as she walked to the corner.

An excited gleam spread out on Carina's face as she finished wrapping the last of the bandages around her ankle, flexing her toes to make sure the rest of her foot was properly supported. She had already given her hands a similar treatment, making sure to add a few extra layers around the knuckles while leaving the tips of her fingers completely void of protection.

Thus was the way of lethwei, the sport she had grown too live and breathe. Brutal beyond measured, but filled to the brim with tradition, technique, and honor. And here she was, thousands of miles from home, ready to showcase the sport in the new and reformed Momentum circuit.

From what she had heard, not everyone was as thrilled with the changes as she was. Sure, the shift had brought in a tidal wave of martial artists and diverse fighters from around the world, herself included, but it had also upset the boxing establishment that had previously called Momentum their home. From what she had gathered, tonight's opponent fell squarely in the latter camp. She let out a small sigh, worried that her opponent's limited fighting style wouldn't provide the thrill or aptitude to keep up with the brutality they were about to throw themselves into, but she quickly dispelled those thoughts.

After all, she had to commend her opponent for giving it a shot at least. A boxer vs a lethwei fighter? On paper a fight like this wouldn't be a competition at all! More like a one sided beatdown filled with bloody kicks, knees, elbows and headbutts galore. Either her opponent was desperate and trying to stay afloat in a league no longer reserved for the likes of her, or this brave boxer had a serious ace up her sleeve. Either way, the sound of the entrance music playing outside signaled her turn to enter the arena and find out for herself. 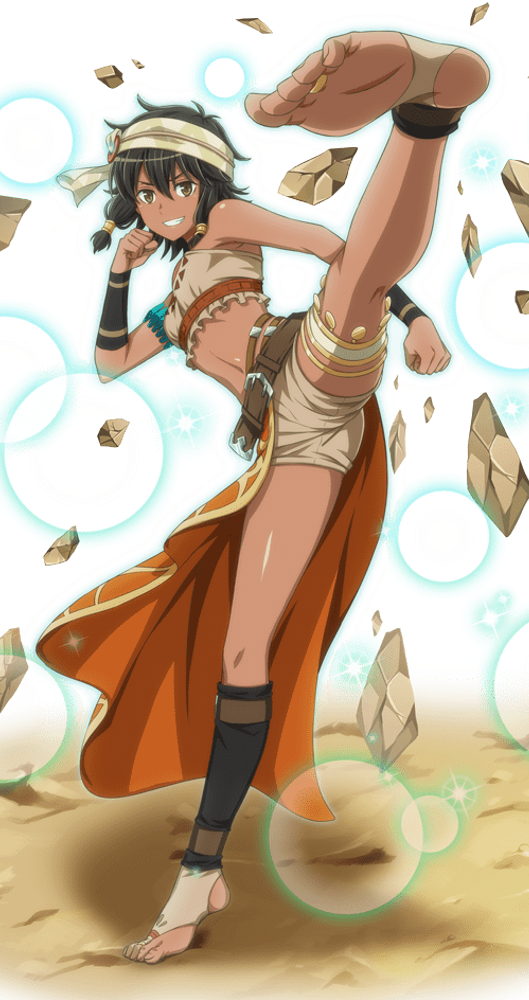 Carina descended down the ramp with a confident smile, the orange skirt affixed to her belt flowing behind her in lieu of traditional entrance robes. Her entrance thankfully not crowded with the usual theatrics that accompanied the other promotions in the league. Instead, the arena was filled with the eager murmurs and solemn gaze of an audience excited to see such a brutal sport make it's debut in the Momentum ring. She ran her hands across the top of the ropes, appreciating the familiarly of the rough texture along her bare fingertips. She greeted her cornerman with a brief nod as he unbuckled her belt and skirt, leaving her with her wraps, top, and shorts, all styled in traditional Amazonian fashion. With a lift of the ropes by her cornerman, she was granted entrance into the ring.

She approached the center of the ring, fighting hard to suppress a bubbly smile underneath her stoic expression. She slowly raised her right leg up and over, rhythmically patting her left shoulder as she began the lethwei yay, or warrior dance. She repeated the move once more with a loud shout, this time using the opposite leg and and shoulder all while making sure to eye her opponent who stood uncomfortably across the ring. She concluded the dance as the two met center-ring, allowed a small smile to slip through as she noticed her opponent's bewilderment.

"First time huh? I probably should go easy on ya but... no promises" Carina said with a wink, her smile morphing into something a little more friendly as the referee prepared to start the opening fight procedures.
_________________
Friction
Mindy "Merciless" Jang