What was it about competition that just spoke to Satsuki Hayano? It wasn't just the feeling of winning, though. Satsuki always wanted to come out on top, sure, but just the simple act of winning wasn't enough. The butterflies never rose in her stomach at the sight of all her hard work coming together, nor did she seek the glory and recognition that could come with victory. No, what really got Satsuki going was the thrill of the hunt -- the tug-of-war between being certain beyond a doubt that she'd win and the sheer risk of losing all the same. If there wasn't a chance that she could lose, Satsuki wasn't interested. An easy win was no win at all to her, just boring practice for the real thing. If you were to ask her what competition meant to her, she'd sum it up like this:

To give your all, to come and come again until one stood victorious over the other was such a rush.

Satsuki Hayano, the Queen of Clubs: 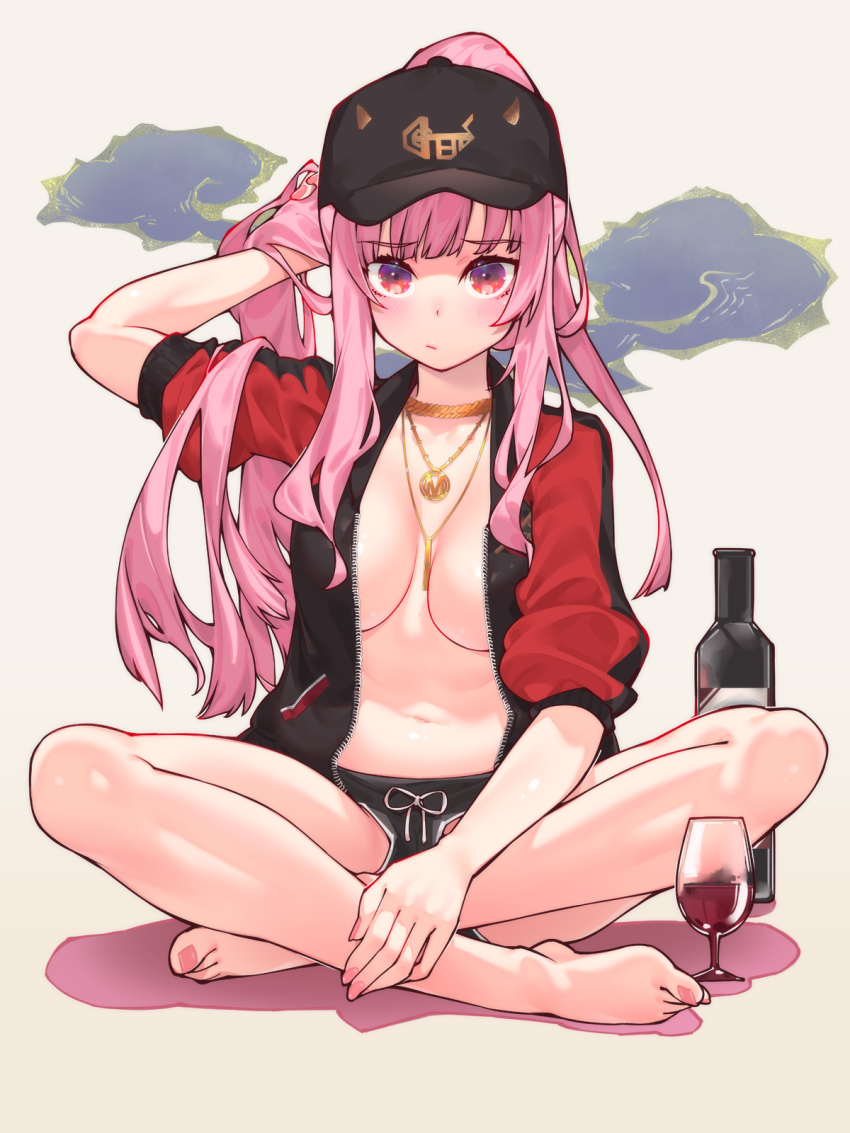 When Satsuki's entrance music rang throughout the arena, she took the first giant leap in pursuit of that high. Here were some of the strongest, sexiest, and skilled women on the planet, and Satsuki Hayano -- a gambler, a poker player, if an ambitious and well-trained one -- was here to challenge them all. And this wasn't just any ordinary challenge in the AFW arena. No, this was a hardcore match. Satsuki and her opponent would fight it out all around the central area of the arena, striking with any blow they could imagine or any weapon they could find. More than that, though, this was a hardcore humiliation match. Just bashing her opponent's head in wouldn't be enough to get the win tonight. No, she and her opponent would have to straddle the line between pain and pleasure, leaving her opponent compliant enough to submit to them. Truly, their bodies were on the line in more ways than one.

Satsuki didn't know much about her opponent for the night, just that she was making her debut as well. That was good -- it meant that she was either confident in her skills, brave enough to push herself, or bold enough to take on a challenge like this without a second thought. The perfect opponent for Satsuki to start writing her legend here at AFW. If you were to ask her what she thought of her opponent, she'd sum it up like this:

Discord: FreestylePoet#1042 - click the logo above to see my roster!

It was hard to describe the look on her manager's face when Hatsu expressed her intentions for her debut match, but horrified would probably be the word that came the closest. It was far and away from any kind of match most girls would be willing to throw themselves in, let alone for their debuts, but if you knew Hatsu, you would know she was the far and away from most girls.

Every fiber in her body was itching for a thrilling fight, and when her manager tried to hide this match proposal underneath the stack of the other much more tame options, Hatsu couldn't help but feel a little offended. This was the opportunity of a lifetime, the chance to start her career off with a bang.  A victory here would certainly be worth remembering, while a lose... "Pfff, like I'm gonna lose." she reassured herself with a sly grin

She didn't know much about her opponent, nor did she want to. The fact that she was willing to enter such a match in the first place was all she needed to know. Obviously this was a girl who wasn't afraid to get rough and personal, someone who wasn't afraid to risk it all for a chance to debut in glorious fashion. Hatsu felt an inkling of admiration for her opponent in the back of mind, but quickly put it to rest. After all, her job was to absolutely mop the mat with her; best to leave respect and honor until after she left the girl a moaning mess at her feet.

Her opponent's entrance music rang throughout the arena, followed soon after by Hatsu's. She took a deep breath, and slowly lifted herself up from her seated position before making her way to the entrance curtain. With thoughts of victory pounding in her head and her signature devious grin spread wide across her face, she threw open the curtains and was greeted with the bright spotlights of the arena and the welcoming cheer of the crowd.

She made a slow decent down the ramp, eyes locked on the ring up ahead and the opponent who stood eagerly within it. She paid little attentions to the hoots, catcalls, and sometimes vulgar comments made by the nearby audience members, no doubt turned on by her scanty choice of attire. Best to save the showboating for when it really mattered, in there. 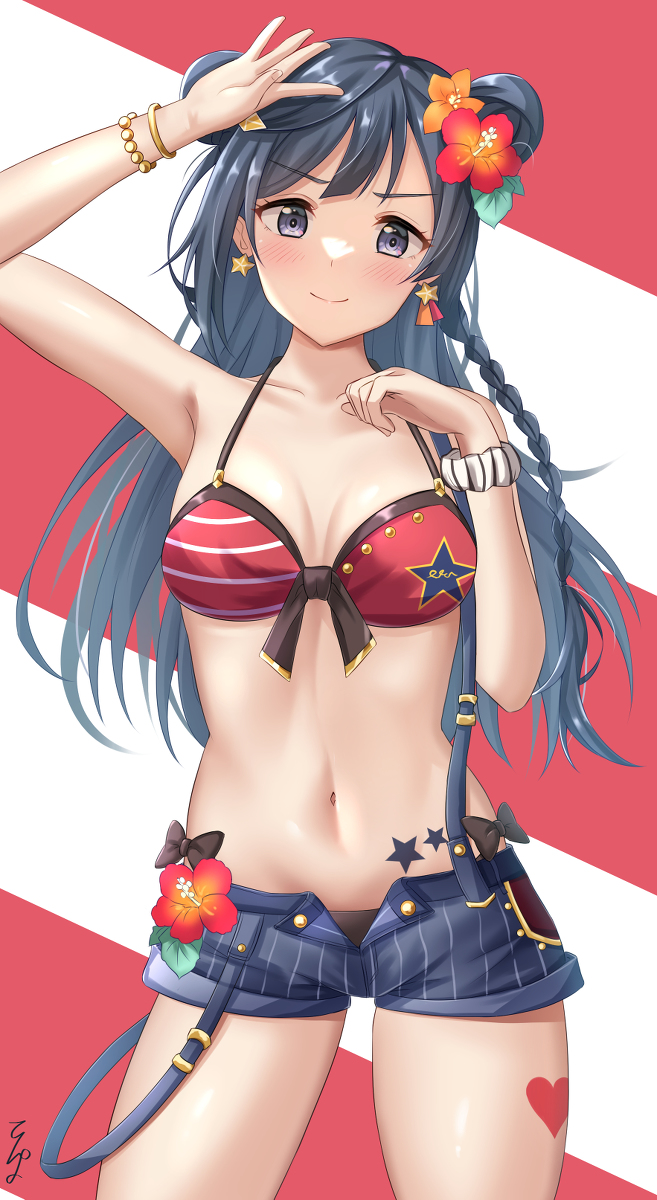 She slowly climbed up the ring steps and between the ropes, her bare feet landing softly on the springy canvas below. She raised her fist defiantly in the air as she made a quick lap around the ring, making sure to lock eyes with her opponents as she passed by her corner. She was of similar build and height, dressed in even more revealing attire that made it very clear that both of them knew perfectly well was was at stake tonight besides their reputations: Their bodies. Toned, confident, and sexy, Hatsu couldn't be any happier with her rival tonight. She ended her lap at the center of the ring, waiting patiently with her arms folded at her chest for her opponent to meet her there before issuing her opening remarks.

"Hatsu Shinada" she would say bluntly, briefly unfolding one hand out for a handshake if her opponent would choose to accept it. The corners of her mouth twitched in anticipation, begging to launch out an all out verbal offensive on her newly met opponent, but she bit her tongue. Best to get the pleasantries out of the way first before things inevitably got dirty.
_________________

Satsuki watched as her opponent strode down the entrance ramp to the pulsing guitar riffs of her theme song. The black-haired girl had an air of confident dignity around her, with an unflappable smirk that didn't waver in front of the crowd -- one that would be so damn fun to shatter into a pit of despair. She had a cute face and a small, toned body similar to her own -- one that would look so damn hot mewling and writhing in ecstasy below her.

This match was going to be great.

As her opponent made her way into the ring, Satsuki moved to the center of the canvas to meet her. Seeing the hand extended out towards her, the Queen of Clubs took it in a firm but polite handshake. The first touch of many they'd give each other, no doubt. And the only one without any pain or pleasure coming with it.

"Satsuki Hayano. I like your style, by the way." Her voice had a casually playful lilt to it, and she brought her hand to her hip, pulling one side of her jacket across the front of her body until it was just barely covering the center of her nipple. The edge of her areola would be visible to her opponent if she looked close enough. "It's a shame that your cute little outfit won't last that long once I get my hands on you."

Satsuki took one sauntering step closer, equal parts threatening and seductive... and then she stared. Stared with a challenging smirk at her lips. Hopefully, the message was clear: If her opponent didn't want to head back to her corner either, Satsuki was perfectly fine starting their match right here, as soon as the bell rang. With any luck, this would be the farthest apart from one another that they'd be all night.
_________________

Discord: FreestylePoet#1042 - click the logo above to see my roster!