» A Belly Détente
by Daaharu Yesterday at 11:16 pm

» Daisuke (Debut) vs Maria Tempasta
by Underdog21 Yesterday at 10:55 pm

“I'm not in the mood to talk about it,” Charlotte said.

Victoria, who was helping the Frenchwoman with bandages, pursed her lips. Charlotte never liked talking about money. But now the situation was a little different. After the young woman closed her martial arts school, her income plummeted. And since Victoria was also in charge of all the financial affairs of her charges, she quickly discovered that Charlotte could no longer maintain the premises that were now a regular gym. The funds in her bank account were melting every day and even the last matches, which were at least outstanding, have not yet fixed it.

“If you don’t want to lose the gym, we will have to discuss it, Charlotte,” Victoria said, she looked into the eyes of the Frenchwoman and saw something there that made her stop, “what's the matter? I can see when you're worried about something. Something happened?"
“It's hard to explain,” Charlotte averted her eyes, “I was meditating recently and I had a strange premonition.”
"Premonition?" asked the Englishwoman, continued to work on the bandages, "the last time it was during the..."
“The Avalanche, yes,” the pink-haired woman nodded, “that time, despite the success, I felt that it meant nothing and that no matter how hard I tried, I would lose in the end. As you can see, this premonition turned out to be true. And now... I have a strange premonition again. That my failure has a lot more to it than we see now. As if it was only the first domino bone. And that my loss in this rivalry will lead to much more significant consequences than I originally thought. I don't know how to explain it, but... I have a bad feeling about this. And from experience, I should trust my instincts."

The manager finished with the bandages and looked back into the eyes of her charge. Charlotte was the second to join her team. And from the first meeting, she realized how difficult the Frenchwoman was. She was constantly fighting with herself. Victoria found it difficult to describe her feelings after the Summer Splash, she was in pain because of what happened. But Charlotte not only found the strength to get on her feet and return to the ring. She seemed to have become even more purposeful. It was at that moment that Victoria realized how great fortitude this woman possesses. She put her hand on Charlotte's shoulder and smiled.

“We can handle this,” she said, “we can handle everything. You came back to the ring for a reason, right? You lost, but you keep going forward. And I will support you in absolutely everything, I promise. So now focus on the match and then we'll talk about everything and find a solution together.”

Charlotte, feeling the sincere support of her manager, smiled and nodded. Yes, Victoria was right. Now the most important thing is the upcoming match. She may have been just a former world title contender right now, but she still had the responsibility on her shoulders. She was not going to give up on it. Never. She was going to go forward in order to take what she had always dreamed of. Words were no longer needed, they both knew it. So Charlotte smiled again and left the locker room.

The young woman walked along a long corridor. Despite taking enough time to recover, she still felt the aftermath of her last match. To say that it was incredibly difficult and cruel would not be enough. That woman was bigger than her, and the conditions of the match turned it into a real brutal confrontation. And now she had to re-enter the hardcore match. One debutant was waiting for her today. But for Charlotte, this was not a reason to relax, she knew that more and more new talented people were coming to the federation. And the fact who her opponent agreed to a hardcore match as her debut already spoke volumes. Charlotte stopped in front of the curtains and took a deep breath. It's time. She's ready. 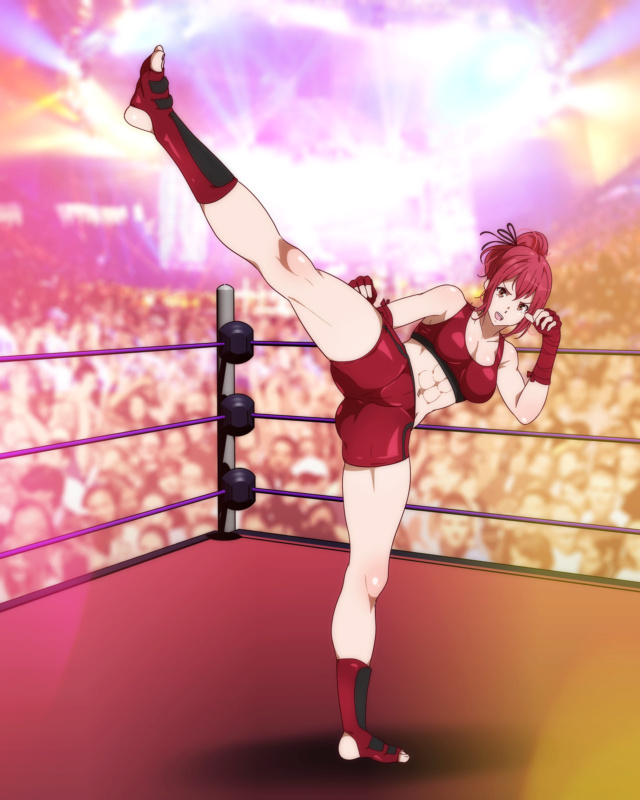 Her music began and Charlotte came out from behind the curtains. She sent three punches in the air in time to the music, and then threw her hands over her head to loud applause from the audience. The young woman could not help smiling. The viewers and fans were important to her, and she felt their support.

She started down the ramp, stopping several times to take selfies and sign posters for her most dedicated fans. The pink-haired woman took a short run and, making a jump, slipped under the bottom rope. Quickly jumping to her feet, she went to the center of the ring and raised her fist above her head with a smile. Despite the fact that she was facing a hardcore match, she felt some peace in the ring. Why? Because it in the ring her place was.

After receiving a final round of applause from the audience, Charlotte greeted the referee and headed to her corner. She threw all thoughts aside. All her experiences can wait. Only the upcoming match was important. The Frenchwoman always enters the ring with only one goal. She was here only to win. She has played in many tough matches lately, but this was her first pure hardcore match. And the Frenchwoman was not going to slow down the pace today. Another match. Another step forward. To the top.
_________________
skip-stop's characters