It was a few days since Rebecca had been in the ring with Remy Mousse. That had been an interesting match up because they had both been working under different assumptions and created a rather interesting match. Rebecca of course had been fighting like the match was real and hitting Remy with everything she had. For her Part Remy had thought this match had been one of the scripted sports entertainment matches and had fought according to a script that did not exist.

After the match the two women had talked briefly buy it was clear there was much more to say. So they set up a little meet up on their next day off to go out and talk, get to know each other a bit more. That was why Rebecca was now sitting on a park bench, she had gotten here about 15 minutes ago and after noticing her friend was not there, settled into the bench, pulled out the book on history that she was currently reading and settled in. She was dressed in her usual going out clothes. A pair of black sandals covered her feet, jeans that did nothing to hide her curves, a purple shirt with a thing purple sweater covered her top and a small handbag finished off the ensemble. She looked like she only had the vaguist idea what "casual" meant as her overall look was too eye catching.
_________________
Valicon's Roster

"Well, isn't this unprofessional from me", Remy thought to herself. It was already 10 minutes past the time she should have been at the park to meet Rebecca. Despite all her culture of punctuality, she was committing one of her own worst sins. Then again, there was a small four-legged reason for it. She glimpsed at the small grey papillon dog she was holding in a leash. Although she had counted the time it would take from the university into the park correctly, she had forgotten about her promise to take care of her friend's dog. Really, she had to practically run to her apartment and grab the dog like a bag to reach the next bus. She hadn't even had the time to change, as she was still dressed in more formal clothing:

Spoiler:
Minus the ears, of course. 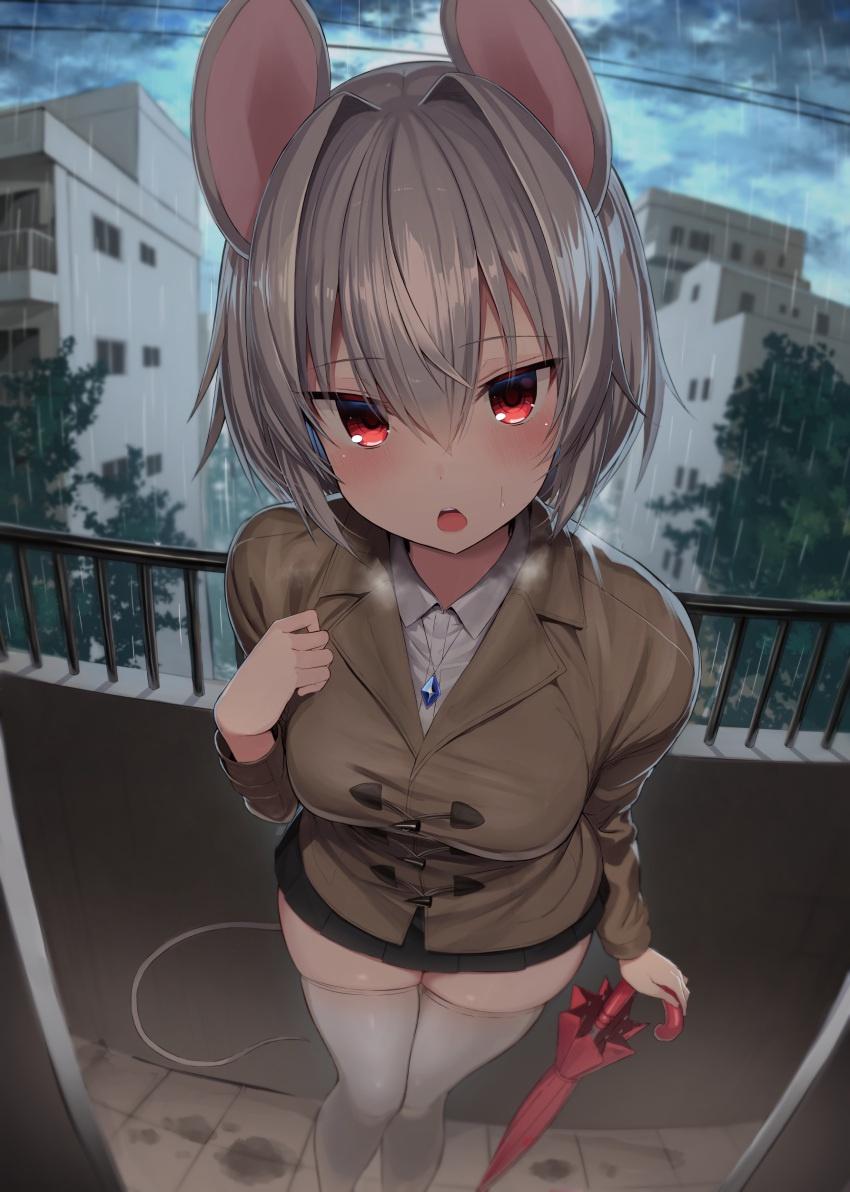 Finally reaching the park, Remy began looking for Rebecca. She reminisced on the events of last match. She had reviewed the match multiple times, trying to find all mistakes she made. However, halfway through her analysis, she had noticed that she reviewed it only through her own lenses. After all, the grave hits she had been able to force on Rebecca were most likely out of luck. In some ways, it was like in social sciences. To understand an event, you sometimes had to adopt a different position. Rebecca was a great fighter, really, she would probably even find success in a scripted environment. Remy liked Rebecca. In some ways, they were like kindred in their own worlds. Both of them took their own styles of wrestling seriously and sought to improve themselves.

Soon Remy's eyes caught upon Rebecca. It wasn't particularly difficult to notice her, as her casual clothing easily stood out. Well, that, and the fact there was an incredibly tall redhead sitting in a bench. Certainly her clothing were quite interesting, but to each their own. She had grown up in Stockholm, which was the hotbed of Nordic hipsters.
"Hello there, thank you for your patience", she went to greet Rebecca. "Unfortunately I had forgotten a furry little obstacle on the way and ran late", she nodded at the excitedly sniffing dog. However, Rebecca seemed a bit confused by the friendly approach, like she had been approached by a complete stranger.
"Oh, I see what's up", Remy finally noticed, and pulled out a couple of mouse ears from her bag, placing them on her head.
"More familiar now?" 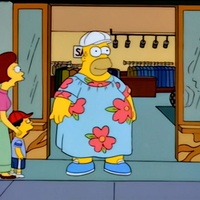 When a girl with a dog first approached her, she had turned because the voice sounded familiar. However it was not until the mouse ears came out that Rebecca recognized her friend. "Ah, it's no concern, it gave me time to enjoy the day and catch up on some reading." She slipped her book back into her bag and stood up to properly greet her.

"Its good to see you again Remy. And of course your adorable little friend as well." She bent down to pat at the dog "is this cutie yours?" Rebecca was more able to show her adorable loving side away from the arena, less people to judge her.
_________________
Valicon's Roster

Remy showed a smile, when Rebecca bent to pet the dog.
"No, it's my friend's. She's away for some time, so I promised to look after her. Better watch out, though. She's a real vicious beast. Almost tried to eat my poor defenseless laptop", Remy laughed, "her name's actually also Remy. Sometimes my friend likes to joke about how we're "the Big and the Little Remys"."

Remy then grabbed the small dog and held it in her arms.
"I've heard that following our match, some have begun to consider you as a "rookie killer"", she wondered, "have you heard anybody figuring out what happened during our match?"
_________________
pretty ok but have you seen the simpsons episode king size homer

Such a cutie wootie could never be vicious...hyper yes, but never vicious. She would keep petting until Remy took Remy back into her own arms. "Yes but which if you is the big Remy?" she laughed as she beheld the two together.

"Hmmmm?" She thought as the question was put to her. "I am not aware that anyone knew of our little show. As fir the rookie killer title...that's not my fault. They keep scheduling the Debutees to fight me. And it's not like I can refuse. That would go against my warrior code of "anytime, anywhere, anywho" it's actually rare that I request a match anymore, most of them are admin (and my pervert of a husband) deciding what I should do."
_________________
Valicon's Roster

"I see", Remy commented on Rebecca's explanation, "I do remember being put against some rather interesting matches before as well, which I couldn't really refuse them either. But I like your code. There were wrestlers I always disliked being put against. Many of them were too amateurish, they couldn't control their throws and holds, they botched too many times, etc. For most of my first two years, I was a jobber, believe it or not. It was my job to make the newbies look good before finally it was decided to push me to become stronger. To get that push, I just sucked it up. They try their best, and so will I."

Suddenly, Remy the dog began adorably barking at a big Labrador that just passed them.
"This is clearly The Big Remy", the "small" Remy laughed at the dog's reaction, "Good to hear that nobody has figured it out, I was kind of worried. I watched the replay from YouTube, and some were speculating on our conversation. Although, few were more intelligent than "Remy: Eat your cheese! Rebecca: Already did.""
Remy then giggled a bit after thinking about how she was able to sum up an average memelord's way of thinking.
"How did your husband comment our match then?"
_________________
pretty ok but have you seen the simpsons episode king size homer

Rebecca took the lead and started walking, on the other side of the park there was a small French style Cafe she just adored. She hoped that would be OK. "How did Shad comment? Well since it did not involve me getting naked he simply told me I was awesome as usual and then proceeded to ask what I wanted to do for my next fight. I think he already figured it out but he probably decided to not comment on it." That was Shad, unless he got something out of it, he just kept most things like that to himself.
_________________
Valicon's Roster

"Must be hard having a husband like that sometimes?" Remy sympathised, "But I guess it must have its perks."

Remy loved the idea of visiting a French cafe. For the last few months, most coffee she had been drinking was from the break room machine. When they got seated, Remy ordered a large mocha and a bun for herself.
"It has really been some time since I had time to fika. Too busy in work and wrestling to really enjoy even a coffee", she said as she enjoyed her drink.

After taking a sip, she took out her notebook.
"I have yet to be booked for another match, but that doesn't mean I can't start preparing yet. Based on our match, what do you think I should change for the future?"
_________________
pretty ok but have you seen the simpsons episode king size homer

Rebecca loved coming here both for the coffee (which she got sweetened) and the chocolate filled croissants. She was a bit of a chocoholic, and hence why she loved this Cafe. "He does give me a headache sometimes, but I don't begrudge him at all, truth is I enjoy those matches too. And he doesn't always book them, sometimes I get the urge myself."

She snacked on her treat while Remy pulled out the notebook. "Things to change. Well obviously you know the big thing now, this is the real deal, so you will need to prepare for getting hit by real moves. Besides that, I think the next biggest thing, and it does go hand in hand with the first problem, I feel like you may have shown off just a little too much between moves. You need to keep up the pressure, don't give your opponent a chance to recover, especially with your build. You need to grab the advantage early and not let up."
_________________
Valicon's Roster

Remy wrote Rebecca's suggestions down. She then took a sip from her coffee.
"A lot of changes, huh. Learning how to get hit shouldn't be too difficult, I'm already pretty durable...", she sighed, "but stopping theatrics will be a mental pain. Adapting to that will be difficult. Hopefully the audience won't find it boring."
She took a long sip from her mocha until it was empty. She really hadn't had coffee this good for a while. She decided to immediately order an espresso and a muffin.
Her thoughts then wandered off into how she could execute power moves. Suplexes and throws would be easy on weaker opponents, but opponents the size of Rebecca would be difficult. That's when she had an idea.
"Rebecca, you've surely had a match against opponents as large as you before, right? What are the weaknesses with people of your size?"
_________________
pretty ok but have you seen the simpsons episode king size homer

Similar topics
» The Amazing Ayumi
» Waz up you amazing rpers
» Emily and Her Amazing Friends
» Shizuka Suyuki - The Amazing Schoolgirl!
» That Kind of Friendship (P)