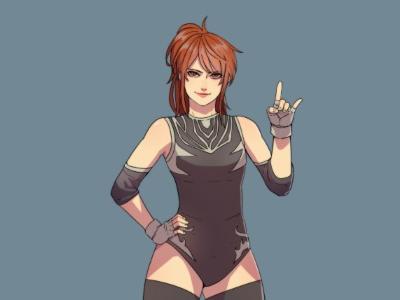 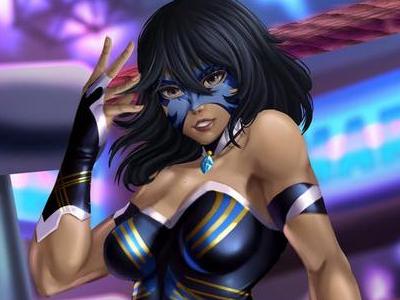 It was Summer Splash time yet again, this time taking the AFW craziness back to the United States, and as such one of the more prominent yanks was given time with a microphone backstage where the blast of air conditioners made a black leather jacket somewhat bearable in the intense humidity "Ah Florida," Adrian began, looking off "You know when I left for Japan over Ten Years ago, places like Miami were always on my mind: the sea, the sand, the fans... for a whole decade I hoped, I prayed! And I'm not the religious type-" The black-clad American continued, stopping mid sentence to let the fans get their cheer in for mentioning the city they were in before she continued "-that I would never have to step foot in this hell hole of a state in my entire life." She concluded, clearly hearing the crowd's pitch turn from rowdy cheers to drunken boos.

"Florida, you should be thankful that I'm contractually obligated to be polite here, because there's so much I can say about the land where anything can happen and unfortunately will, God's very own waiting room, things that I cannot in good consciousness say before some overweight sweat hog in a Hawaiian shirt two sizes too small jumps the guard rail with an AR-15 in hand that he needs for the 30 to 50 wild boar that roam the wilderness because the gators and the tourists aren't enough of an infestation. So for the benefit and safety of everyone involved, perhaps we can focus instead on how damn good the Aztec Middleweight Championship is going to look wrapped around my waist." Adrian ranted before walking off, leaving the interviewer stumbling to think of a way to salvage what just happened.

Adrian Kytes' Battle Cry wasn't enough to stop the crowd from making themselves heard as the woman who had walked into last year's Summer Splash as World Champion was now walking down the ramp, past the faux beach bar and sand pit, as the challenger to a different company's championship. "If there's anyone in Mexico watching this!" She called out to the camera before sliding in to the ring "Say Hola to your new champion!"
_________________
Adrian Kytes (Heel) Outspoken All-Rounder
Rebecca Tomko (Tweener/Heel) Amazon Enforcer
Sabine Shanoa (Face/Tweener) Dancing Succubi
Tina Armstrong (Face) Blue-Eyed Superstar
Yelena Turova (Face) Crushing Powerhouse
Pantha (Face) Pride of the Jungle
Anna Silver (Face) Ardent Angel
The Green Empire The Empress & Imperial Guard.
Mara Jingfei (Face) Amethyst Dancer

Maria slammed the locker door closed as the echoes of Adrian's fiery promo managed to reach her backstage. For a moment, she looked down, seeing her reflection in the polished gold of her Aztec Championship. So long after her last defense....many times when she believed she was done, she attempted to return it, only to be turned away.

'Come back for one last match....until then...you shall always be our champion." they told her. For so long it felt wrong to carry it, but not defend it. The moment AFW was open to her, she took the belt with her. She refused to seize this chance and not show that she earned this with her blood, sweat, and tears. No woman was ever going to take that from her, and she refused to let this loudmouthed, deceitful with be the one to scratch another loss to her record.


The Florida crowd went hushed as the arena lights went dim, before a loud explosion of pyrotechnics drew their eyes to the top of the ramp. Rising from the smoke, Maria strode from the smoke donning a ornate Calavera Mask as she glared at her opponent. Around her waist hung the prize of the night, the glittering Aztec Championship.

She never once broke eye contact with Adrian, stepping up the metal stairs and ducking under the ropes. A hand gracefully hooked under the Skull Mask, pulling it up to reveal her traditional ring mask underneath, adorning a fierce, competitive glare.

She handed the mask and her title off to the ref, letting her finger brush over the engravings before the official fully gained possession.

The bell clanged as the announcer stepped forth and raised the mic to her lips, "The following contest is scheduled for one fall, and is for the Aztec Championship! This match shall be fought under Lucha Libre rules, constituting a 20 count timer for the referee to use."

As the pair were introduced, the crowd dueled with cheers and boos, though more heavily in Maria's favor due to Adrian's scathing promo. Raising an eyebrow, she cracked her neck as her body sank into a familiar ready pose, arms outstretched, "Well then senorita....ready for your lesson?"
_________________
*sigh* Ok let me get the passcode.....all set, go on in!

Adrian's eyes met Maria's as they both discarded the superflous parts of their entrance attire but every so often the former cosplayer's glare would shift ever so slightly as she kept stealing glances at the Aztec title that The Reaper brought with her, thinking about how an excursing to Mexico as their champion wouldn't be the worst thing in the world.

Still, once the bell rung Adrian Kytes was all business, circling around the ring with the Luchadora before moving in to lock up with the older high-flier. It wouldn't take much jostling for the brunette to abandon just pushing her back and instead looking to slip round and loop her arm over Maria's head, pulling her into a side headlock to kick things off.
_________________
Adrian Kytes (Heel) Outspoken All-Rounder
Rebecca Tomko (Tweener/Heel) Amazon Enforcer
Sabine Shanoa (Face/Tweener) Dancing Succubi
Tina Armstrong (Face) Blue-Eyed Superstar
Yelena Turova (Face) Crushing Powerhouse
Pantha (Face) Pride of the Jungle
Anna Silver (Face) Ardent Angel
The Green Empire The Empress & Imperial Guard.
Mara Jingfei (Face) Amethyst Dancer

The ring rumbled under their boots as the pair circled around one another, with the audience leaning forward to get a better view of this intense new feud! Hard to believe it was born out of a live show, and now their match was being showcased on a PPV of all things, and so soon after Maria's official AFW debut.

Muscles tensed as the pair locked up, much to the crowds delight as there were a few dueling chants for both Champion and Challenger. Meanwhile Maria dug in her heels, just as Adrian smoothly transitioned into a side headlock! With a grunt, Maria tried to shove off Adrian, as her forearm put the pressure on her skull and neck! With a hard grunt, she turned and shoved Adrian in the small of her back, right toward the ropes!
_________________
*sigh* Ok let me get the passcode.....all set, go on in!

Cussing under her breath, Adrian was pushed up against the ropes while trying to keep the headlock on Maria as tight as she could despite the Luchadora's struggles shoving her into the cables, the former cosplayer managed to twist herself enough to go back first into the side instead of side on, letting them pull taunt before she pushed off and jogged to the other side, putting a bit of space between herself and Maria as she braced herself on the other side of the ring, slinging her arms over the top rope to hold herself steady.
_________________
Adrian Kytes (Heel) Outspoken All-Rounder
Rebecca Tomko (Tweener/Heel) Amazon Enforcer
Sabine Shanoa (Face/Tweener) Dancing Succubi
Tina Armstrong (Face) Blue-Eyed Superstar
Yelena Turova (Face) Crushing Powerhouse
Pantha (Face) Pride of the Jungle
Anna Silver (Face) Ardent Angel
The Green Empire The Empress & Imperial Guard.
Mara Jingfei (Face) Amethyst Dancer

Maria's efforts to free herself proved fruitful, with Adrian now on her way toward the ropes....only to hold herself on the opposite side of the ring, instead of bouncing off the cables! Maria gave a small nod, one hand on her waist as the crowd ate this up.

"Try to keep your feet OFF the ropes Senorita..." she taunted, darting in with a high kick aimed right for the former champion's side! Her nasty kicks were the bane of many women, as Adrian well knew...and was about to be reminded once again!
_________________
*sigh* Ok let me get the passcode.....all set, go on in!

Adrian was still pulling herself off the ropes when Maria dived back in to the fray, catching the former world champ with a high kick to the ribs before she could get her arms free to catch or block the incoming kick "Ah!" Adrian yelped as she staggered sideways from the stinging strike. First blood to the lady of lucha it seems, but there was a lot more to a match than the first blow.

The kick hit home with a hard THWACK, much to Maria's satisfaction. A follow up clinch brought the pair together, with Adrian managing to seize her arm and give it a nasty twist to bring her down in a wrist lock! Maria's face, or what was visible, contorted in pain, as she tried to roll forward and relieve the pressure on the limb!
_________________
*sigh* Ok let me get the passcode.....all set, go on in!

The luchadora was gonna lucha, and that meant rolling over to un-twist her twisted wrist but Adrian wasn't about to let her solid grip loosen for the sake of a bit of acrobatics as the former champ suddenly knelt down on top of the outstretched arm mid-roll, pinning it and Maria to the ground instead of letting the Aztec champion get back to her feet. There wasn't any big plans from the brunette, as she maneuverer on top of her opponent, she just wanted to control Maria's arms before rolling sideways and pulling the veteran into a sudden crucifix pin. Even if she wasn't grabbing the ropes Adrian could get the shoulders down in an instant.
_________________
Adrian Kytes (Heel) Outspoken All-Rounder
Rebecca Tomko (Tweener/Heel) Amazon Enforcer
Sabine Shanoa (Face/Tweener) Dancing Succubi
Tina Armstrong (Face) Blue-Eyed Superstar
Yelena Turova (Face) Crushing Powerhouse
Pantha (Face) Pride of the Jungle
Anna Silver (Face) Ardent Angel
The Green Empire The Empress & Imperial Guard.
Mara Jingfei (Face) Amethyst Dancer