*As both, fierce competitors began conversing with one another in a universally understood dialect, the language of closed fists and bruised egos, Claudia's enhanced perception blessed her with the ability to detect even the slightest change of direction from her dizzied foe. Sensing an incoming assault, The ferocious denmother somersaulted sideways before landing on the balls of her feet, elegantly avoiding the spontaneous retaliation before snagging the edge of Harumi's arm!*

"You honestly believed something so basic would work against me?" *Claudia unleashed a menacing snarl while forcing the groggy individual back onto her unsteady feet.* "Either you're underestimating me, which I'm not particularly fond of, or you've never fought someone of my ferocity before. Let me educate you on just how malicious someone like myself can be!"

*Lurching backwards with a guttural howl, Claudia suddenly vaulted forward with a menacing leer in her eyes, extending her closest arm outwards to try and behead Harumi with a massive lariat across her throat! The captivated audience responded with a mixture of shock and amazement, having witnessed only a mere iota of what the tenacious predator had in store for them!*

Harumi’s kick packed more power then one might have expected of an attack that was simply reactionary, but even that quick quick had coordination and grace to it. It was a practiced move, one that would have dealt some serious damage if Claudia tried to tank it! The Hellhound was too smart for that though, and actually managed to avoid the swipe of her samurai foe. In doing so, she managed to get close to Harumi’s wrist in the process, and her hands clamped around the champion’s wrist like the jaws of the hound she based herself on. Harumi’s gaze followed Claudia, but she otherwise did very little to stop her. Claudia was getting mad, that much becoming clear.

The challenger snarled at Harumi like an animal, insulted that Harumi would try such a weak retaliatory attack against her. With bared fangs and a fire in her eyes, Claudia had no reservations about getting directly into Harumi’s face! That stoic expression remained on the champion’s face like a mask that would never come off, yet the more Claudia spoke, the more Harumi’s eyes seemed to focus on her. Claudia had thought she was the malicious fighter in the squared arena. And as she threatened Harumi more and more, that fact was slowly starting to wane.

Claudia pulled Harumi’s arm in order to stand the champ back up, only to wind her own arm up and SLAM it into Harumi’s chest! Of course the result was obvious, as the teal attired warrior was brought back to the ground in a riveting crash! Challenger or not, Claudia’s muscles were still like coiled steel, and the Hellhound could likely duke it out with some of the heaviest hitters in AFW! The crowd seemed to enjoy the display of power, cheering Claudia on as Harumi rolled over, and was already beginning to stand back up!

But rather unexpectedly, Harumi sprung towards Claudia, her elbow swinging around to try and smack Claudia’s jaw! If she succeeded, then Harumi’s real blade would become known to Claudia as one of the champs hands grabbed Claudia’s collar, and the other grasped her sleeve! Once her hands were in place, there was very little to stop Harumi from performing a Tai Otoshi! A ruthless judo body drop that would slam the Hellhound right back to hell!
_________________
Tarantulust's Lair

*As the scarlet hellhound crashed into Harumi with a thunderous lariat, the inevitable conclusion was achieved, coaxing a boisterous* "Hoooowwwwllll!" *From the maniacal wolf. However, unlike the hundreds of other competitors who fell prey to her deceptively powerful upper body, the intrepid champion seemingly caught her second wind right before her very eyes!* "How did she....GGGUUHHH!" *The impromptu smashing of her mandible, courtesy of Harumi's elbow, sent Claudia staggering backwards, the audience whistled and shouted indiscriminately towards the action!*

"Th...that's what I'm talking about!" *The feral predator snarled, stomping her foot against the arena as a means of digging her heels into the ground, inadvertently negating the grip her foe was attempting to establish upon her.* "Seems like you're finally starting to let loose, so I might as well join you, girly!"

*Twisting and thrashing her arms around to try and escape Harumi's unflinching grasp, Claudia managed to intertwine her fingers within her adversary's, pushing against her as a means of forcefully overwhelm her!* "I intend to make this place become your grave, and that belt of yours shall make a fitting tombstone!" *Her eyes were transforming into bloodshot saucers, hellbent on crushing every fiber of Harumi's being!*

The Entropy champion’s grip was like that of a steel claw! Seemingly unbreakable, Claudia was smart and moved to intercept Harumi’s grip before it could lock itself in rather than fight it afterwards! Rather than be trapped in the Judoka’s throw, Claudia managed to instead create a competition of physical strength between herself and the Champion! In that regard, the Hellhound seemed to have the advantage, with Harumi holding out thanks to the leverage her awkward partial grip over Claudia gave her. For the moment, they seemed evenly matched, with Claudia taking the chance to bark out a very nasty promise of burying Harumi in defeat and shame.

“You whimper like a pup in the rain Claudia! The only bite I’m getting from your words is your rancid breath!”

Rather than wait for Claudia to push her strength onto her, Harumi would instead try to break the hold as quickly as she could. The Samurai launched a kick to Claudia’s legs to try and destabilize her stance, only to transition to putting her foot against the Hellhounds stomach! If it worked, Harumi would fall backwards, pulling Claudia along only to throw the Hellhound up and over her in a circular throw! The throw was more to get some distance in between herself and this villainous challenger!
_________________
Tarantulust's Lair

"Ggrrhh...at least you're willing to banter now that I've tenderized you a bit!" *As the palpable tension between the two, fierce competitors began to gradually reach a fever pitch, the voracious canine felt a burning sensation against the epidermis of her midsection, causing her to double over from the abrupt discomfort. Before she could compose herself, Harumi subsequently tossed her across the arena, attempting to capitalize on this momentary paradigm shift!*

"Nnnnhhh!" *To the astonishment of the audience, the acrobatic hound managed to land squarely on the platforms of her paw print boots, charging up a nearby, metallic pillar to garner a sliver of momentum before twisting midair, attempting to slam herself across Harumi's figure for a colossal body splash attempt!*

“Banter implies good nature! A state of mind I'm not sure you’re capable of, Hellhound!”

There was probably no love lost between these two as they continued to verbally spar just as much as they were physically sparring. While not nearly as violent as some of the other heel’s Harumi had faced, Claudia was still plenty annoying, and the Judoka was happy to finally get some distance between herself and Claudia as the Samurai finally kicked the pup away! Unfortunately, Claudia had the flexibility of a cat, and she managed to twist herself in midair in such a gravity defying stunt that she actually landed on her feet! Harumi clicked her tongue as even she had to think the maneuver was an impressive one. However, the Hellhound used the respite to quickly climb the nearest corner post. It didn’t take a wrestling genius to guess what was coming next, and Harumi would use the experience that had made her a champion to intercept Claudia before she did too much damage!

Jumping forward, Harumi would perform a flip, pushing off her hands in order to get some proper air and thrust her legs outwards! The Samurai was looking to spear Claudia mid jump by planting both of her boots in the Hellhounds vulnerable stomach! 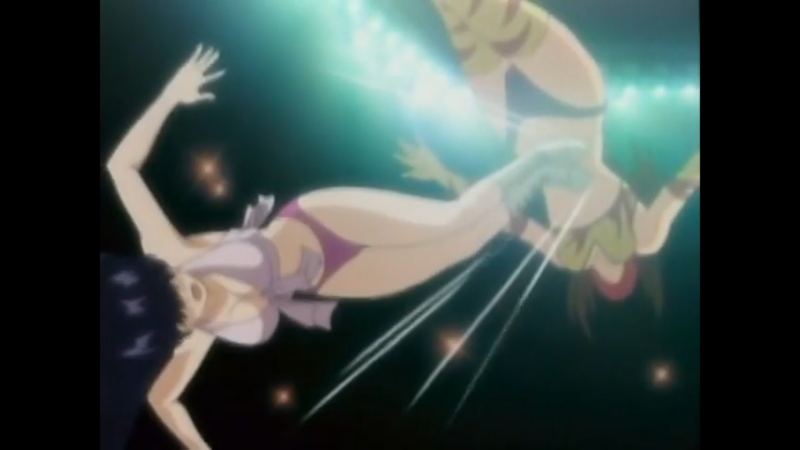 *The surly, snarling bitch was finished trying to expound upon what little common ground she had established with the otherwise taciturn champion, so the instant she quipped with a stinging bit of derision, Claudia snapped! As her body continued to plummet towards the seemingly motionless woman, eyes locked for any signs of abrupt movement, under the assumption that her move would undoubtedly meet its mark. This, however, would soon become wishful thinking, as Harumi gathered herself before the soaring predator could notice, slamming the platforms of her boots dead center into her sternum!*

"RRRRRHHHH!' *The confluence of anguish and bewilderment sent Claudia spiraling towards the ground, a sickening* "THUD!" *Serving as the turning point of the bout- Her once energetic frame was now limp, preserving just enough vigor to crawl towards the closest rope and toss her hand atop it, trying to feebly cling onto the last ounce of consciousness she had!*

Like an animal being felled by a weapon, Claudia collapsed to the ground in a terrible looking clump! The impact looked bad compared to Harumi’s more professional looking roll when she hit the ground. The champion was quickly back on her feet. Tired, but ready to continue. The Hellhound on the other hand was using the ropes to get back to her feet. She appeared tired and ragged, barely clinging onto her consciousness. Normally, this would have been a golden opportunity to finish Claudia off, but so long as her hand was on the rope, Harumi couldn’t touch her. It broke the rules.

“If you give up, we won’t have to continue fighting each other. You're tired and hurt. You could use the rest.”

The champion stood a few feet away, not crowding Claudia, but not giving her the space to build up any momentum either. The ball was in Claudia’s court for the moment, with Harumi’s emerald green eyes watching her the entire time.
_________________
Tarantulust's Lair

*Subconsciously, Claudia knew that her chances of surviving the onslaught that Harumi had in store for her all hinged on remaining against the ropes, and as her depleted vigor began to replenish, she started to formulate a proper retort.* "Mhh..submit...and miss all the fun I have in store for you?" *She rhetorically asked, spontaneously springing to her feet with an astonishing amount of robustness!*

"Why, that would be a horrible disservice to us both, Hari!" *The feral wolfmother proclaimed, jutting her elbow forward while closing the gap between herself and her prey, attempting to smash her jagged edge deep against Harumi's maw in an attempt to turn the tide against her! This was clearly a desperation tactic, but by this point, Claudia refused to be toppled by this woman!*