AFW Stories. Margarita Jorgensen and Karen Aoki-Justice. On the way to the light

AFW Stories. Margarita Jorgensen and Karen Aoki-Justice. On the way to the light

It was a very hot day. Margarita loved every season, but summer was her favorite part. In the summer the sun shone brightest and the Danish girl loved to enjoy these warm rays. Even now, she sat on a bench in the park and threw back her head, enjoying the pleasant warmth on her face. She was supposed to meet Karen here. No, her friend was not late, just the pink-haired girl came a little earlier. So she decided to just soak up the sun. There were airpods in her ears and she did not notice absolutely nothing around. 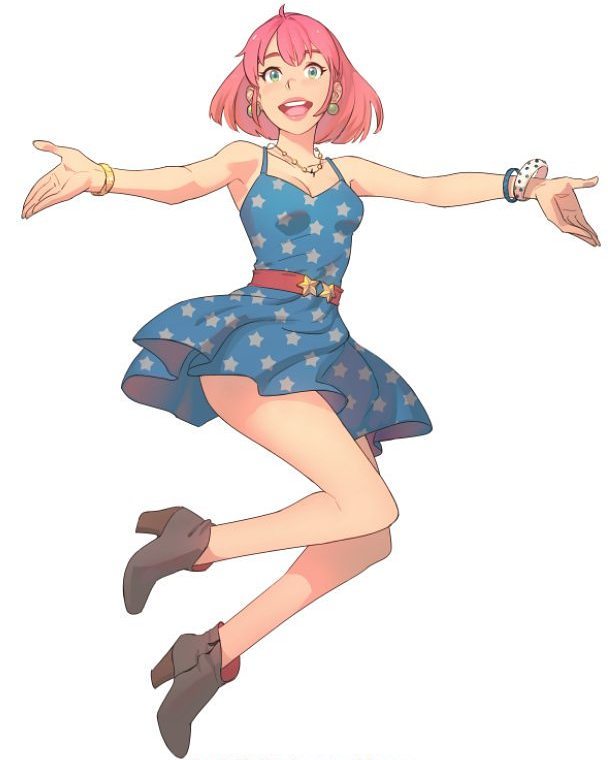 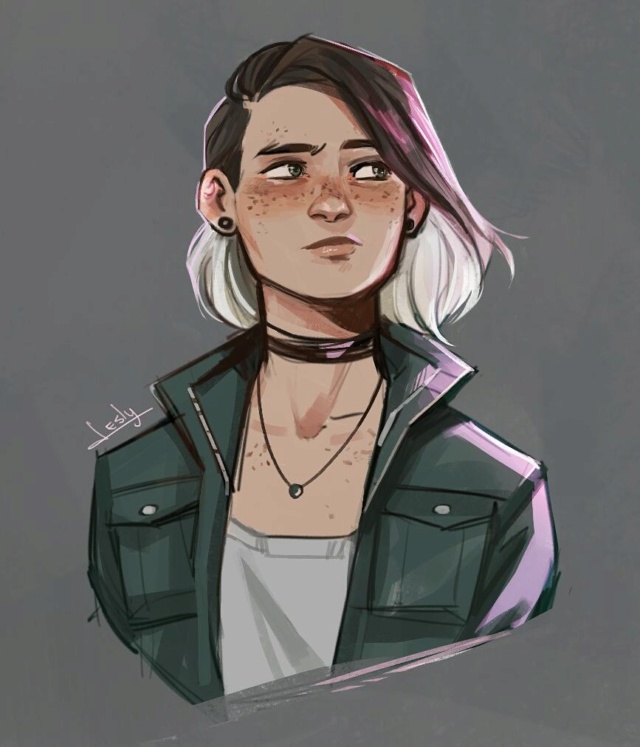 "You're singing off-key on high notes," a voice rang out nearby, "don't they teach singing in acting school?"

Margarita pulled airpods out of her ears and opened her eyes. Karen was standing nearby and smiling. It's funny, this girl has always been quite gloomy. But next to Margarita, she always smiled a lot. Karen was an interesting person. She was very kind to her friends, but with everyone else she was always quite detached. Margarita smiled back, despite the fact that Karen's sarcasm was sometimes too sarcastic at times.

"Yes, any actor has to be able to sing, but in editing there is always the option to slightly change the voice, so..." the pink-haired girl shrugged in reply to the joke.

Karen chuckled slightly and sat down on the bench next to the former actress. She followed her friend's example and threw back her head, enjoying the sun. Today they decided to go shopping before training with Charlotte. Karen and Margarita began to spend a lot of time together, recent events have brought them together. Each of them tried to support the other. And each of them needed it.

"Give me one airpod," Karen asked without opening her eyes.

Margarita nodded and held out the right airpod to her friend. Now there was some relatively sad song on the player. Karen's face twisted and she took the player from the hands of the Danish girl.

"If you'll listening this kind of music, you'll get depressed," she grumbled, studying Margarita's playlist.
"This music reflects my mood," the girl shrugged.
"Exactly. And this is wrong," Karen said more harshly, "to hell with it all. Better focus on getting stronger. And even more stronger after that. Have you heard that the water not flowing under the lying stone?"
"You must be kidding," Margarita pursed her lips in displeasure, "I train to exhaustion almost every day in order to finally start winning. So don't tell me that I am the lying stone."
"If you were angry in the ring as you are angry at me now, your rivals would start to tremble," scarcasm and sarcasm again, but then Karen relented, "but that's not really what I mean. It's all about how you look at it. And if you train listening to this dark, shitty music, it doesn't make any sense."

Margarita took a breath and leaned back. Karen has always been straightforward as a fucking rail. She never threw words to the wind and always said what she thought. And Margarita considered it a good quality. Karen has always said that we have to decide for ourselves what to do next. The Danish girl knew that her friend had gone through a lot and that her outlook on life was very specific. Karen herself said that she was the greatest realist on earth.

At some point, Margarita was ready to send it all to hell. And at that moment she thought that this was the only right decision. When you are failing, the best decision is to leave it. And the Danish girl was ready to give up her dream of being a wrestler. It hurt her to lose every time. The former actress felt that with each defeat, she more and more lost the opportunity to fulfill her dream.

But Karen instilled in her the confidence that it was not too late to fix everything. Three defeats in a row. Eka. Alaina. Amber. They all beat her, leaving a trace in Margarita's soul. It couldn't be otherwise. But she was still here. And she was determined to work on in order to become better. But even she didn't know if she could do it. Yes, she was a dreamer. But sometimes statistics hit dreamers too hard in the head.

It was really funny. But perhaps for this reason they became real friends. A strange smile appeared on Karen's face, which Margarita did not like very much. Usually that smile meant that Karen was up to something. But before she could ask, the Japanese girl got to her feet.

"That's it!” she said, and pushed the play button.

Music started playing in airpods. And Margarita recognized this song literally from the first note. A slight blush appeared on her face, she immediately understood what Karen wanted from her. The Danish girl started shaking her head.

The Japanese girl took a few steps back. There was a wide smile on her face. She started dancing. And not only.

"Somebody save your soul cause you've been sinning in the city I know..."
"Too many troubles, all these lovers got you losin' control..."
"You're like a drug to me, a luxury, my sugar and gold..."
"I want the good life, every good night you're a hard one to hold..."

She stopped and pointed at Margarita.

Karen winked at Margarita, who was about to sink under the ground. There were people around who looked at Karen like she was crazy, but the Japanese girl didn't seem to care at all. She continued to smile and began to dance again, not taking her eyes off Margarita.

"Somebody save your soul cause you've been sinning in the city I know..."
"Too many troubles, all these lovers got you losin' control..."
"You're like a drug to me, a luxury, my sugar and gold..."
"I want your sex and your affection when they're holding you close..."

Karen froze in place and pointed at Margarita.

Karen quickly sat down on the bench, turning to Margarita. The Danish girl could not believe what her friend was doing.

"Every night when the stars come out..."
"Am I the only living soul around?"
"Need to believe you could hold me down..."
"Cause I'm in need of something good right now..."

Before the former actress could do anything, Karen took her hands and forced her to rise from the bench. The Japanese girl continued to dance, literally forcing Margarita to do the same.

"We could be screaming till the sun comes out..."
"And when we wake we be the only sound..."
"I get on my knees and say a prayer: James Brown..."
"That I can make your hands clap!"

She couldn't resist. Despite the terrible mood, she could not help smiling. Karen literally exuded positive energy. And the former actress knew that her friend was doing it just for her sake. Margarita started dancing with Karen.

Karen smiled even wider. She knew there was still hope inside the Danish girl. Positive people always find it difficult to deal with setbacks. And Margarita was the most positive person she knew. And Karen was sure that if she could get to the hope inside her friend, then the pink-haired girl could smile again for no reason as she had before.

"My flesh is searching for your worst and best don't ever deny..."
"I'm like a stranger, give me danger..."
"All your wrongs and your rights..."
"Secrets on Broadway to the freeway, you're a keeper of crimes..."
"Fear no conviction, grapes of wrath can only sweeten your wine..."

Both girls froze theatrically in place. People looked at them as if both girls had escaped from a psychiatric hospital. But now none of them cared about it. Margarita was overwhelmed by music and good mood. She pointed to Karen.

Karen began to move as if she were in space, and Margarita began to slowly walk towards her, as if they were attracted to each other by a magnet.

"Every night when the stars come out..."
"Am I the only living soul around?"
"Need to believe you could hold me down..."
"Cause I'm in need of somethin' good right now…"

The girls simultaneously made a dab, looking somewhere to the side.

"We could be screamin' till the sun comes out…"
"And when we wake we'd be the only sound..."
"I get on my knees and say a prayer: James Brown…"

They both turned around and made a dab the other way.

"That I can make your hands clap!"

Karen and Margarita threw themselves into a frantic dance, while someone on the side, apparently, was about to call the police. But nothing could stop them now.

Dynamic stomps and each of them made dabs in different directions. The song was over. Karen was breathing heavily, and Margarita threw herself at her friend with hugs, laughing happily.

"Thank you!" it was also hard for her to breathe, but emotions overwhelmed her. "It was what I needed! You're the best!"
"Repeat this more often, sweet," sarcasm and sarcasm, "just always smile like now and the world will become much better."

Karen hugged her friend too. The soul of the Japanese girl became a little calmer. Of course, it was not a cure for all diseases, but it was worth it. She saw Margarita's smile and she hoped that this drop of positive in the middle of the abyss of despair would be the starting point for her friend. The last time Karen did something like this for another person who also felt bad. It's funny. It seemed like an eternity had passed since that moment. And she hadn't seen Lily for a long time...

"Hey, stick your phone up your ass, asshole!" Karen shouted sharply at some man who was on the phone and looked askance at the girls.
"Oh, maybe let's go?" asked Margarita, releasing Karen.

The Japanese girl nodded. They grabbed their bags and headed out of the park. Each of them was smiling. It is for the sake of such moments that it is worth continuing to live. Even if you don't see the light around. Margarita realized that she wanted to show her Karen. And she was grateful to her friend for that.

"I know you don’t like to make promises," said Margarita, "but can you promise me that everything will be fine?"
"You are a real pain in my ass when you ask for such things…" Karen chuckled quietly, she perfectly understood what Margarita meant, and it was really difficult for her to make such a promise, but... "everything will be fine. I promise. Now let's go, we have some shopping and then a workout!"
"Hai!" the pink-haired girl in Japanese replied with a smile.