Was she embarrassed? Yes, she was definitely embarrassed. Lunara in all its glory saw the blush on her rival's cheeks at the moment when the blonde threw her bra aside. It’s easy to guess that Grace didn’t have much experience in such matters. But in that case, the question arose, why the hell did she agree to such a match for her debut? However, she was not even aware of the rules, so... it was all very unusual.

But in any case, this was not a problem for the predator. On the contrary, she enjoyed spending time with people who had no experience in sex. She will never forget the time she spent with Sierra. And now she wanted to see how the Korean girl would prove herself when the Jaguarundi would start doing what she did best. What is it? Best of all, Lunara knew how to give pleasure.

Negation. Of course. When their pale tits touched, Grace began to fight back. Her body began to move from side to side, she tried to escape. But Lunara could not be fooled. Her sister knew how to look directly into the soul of any person. But the blonde had a different gift. She understood body language perfectly. And despite Grace's resistance, she was sure that her rival wanted it. And with each movement forward and backward, Lunara felt that the brunette's nipples were getting harder and harder.

She could not help but whispering these words in the ear of the young girl. Lunara made such promises often. For some, this might seem like something dissolute. Well, there was some truth in that. But the bottom line was that the predator never denied her desires. Life is too short to contain yourself. She saw freedom in sex. And she saw passion in fights. And so she never refused it. And that's why she could afford to make such promises. Because when she says that her partner will not forget her, then she says it for a reason.

It really reminded the predator of her first meeting with Sierra. The Egyptian woman also acted in a similar manner. Her mouth said one thing, but her body wanted something completely different. And Lunara was convinced of this the moment their lips joined in a kiss. When their tongues stepped into a passionate dance, her rival's body seemed to turn into cotton wool. Grace had stopped resisting and now, instead of objections, Lunara heard only one thing. And that sound was the sweetest sound ever. The blissful moan of a girl who is getting pleasure.

Without breaking the kiss, Lunara leaned down even more so that her voluminous breasts pressed into Grace's slightly more modest breasts. Their nipples were already hard and the blonde wanted her rival to feel it to the fullest. She loved these touches. Who would not say that no one can understand true pleasure, except for two girls, whose boobs touch in a fit of passion.

Lunara tilted her head back slightly, breaking their kiss. But between their mouths there was a thin bridge of thick saliva. The American girl looked into the eyes of her rival. In the turquoise eyes of the predator, Grace could see genuine passion. And it really was, since Lunara was not going to stop.

She sank a little lower and her lips touched the velvet skin on the Korean girl's neck. She went down a little lower. One more kiss. She went down even lower. Her lips have already touched the brunette's left collarbone. Who already guessed where she was headed? Right. Descending a little lower, Lunara was about to kiss the left nipple of her rival. It was a leisurely and measured kiss. She wanted Grace to fully experience this moment. Because after a few moments, the Jaguarundi was going to stick out her wet tongue in order to start quickly and actively licking this hard tubercle.
_________________
skip-stop's characters

This was very embarrassed for Grace, not only was she was currently at a disadvantage in the match, she started to moan in front of Lunara which was the last thing she thought she would ever do. The Hacker never thought much about how much she can endure when it comes to sexual tension but it seems like it wasn't enough as she felt a warm liquid, dripping down her thighs to her feet but she ignored it for now only focusing on how to escape the situation at hand.

Grace couldn't help herself as soon as both their bust touch each other but have a small squeak utter from her mouth, her body giving into the temptation by the blonde, no where to breath, or even anytime to think, she was almost like in some kind of trance to lay on the table while her body was getting explored with pleasure.

The Hacker saw the passionate turquoise colored eyes of the Jaguarundi which made her feel a bit uneasy at first, her mind trying to take back control but as soon as she felt Lunara's lips on her neck she lost all self control only making a soft moan once again, but this time it was different, as Lunara went towards Grace's bust and not only kiss but lick her left nipple, Grace moans started to get louder as she looks over at Lunara

"A—Aah wait!! N-nooo…" she would quietly speak out hoping the American would stop in time 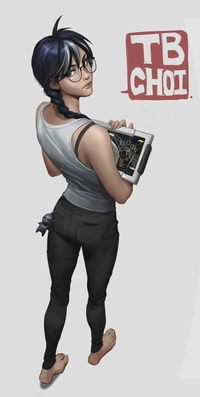 A small shiver ran through the blonde's body every time she heard another moan of her rival. The predator still felt resistance, even though in fact Grace did nothing. But at such moments, sooner or later, rebelliousness always appears. Not only because the Korean girl had little experience with this kind of thing.

And Lunara was going to make everyone hear and see that she is the best. Perhaps not as a fighter, since she had no illusions, she knew that there were girls and women who were superior to her in combat skills. But the blonde was sure that she was the best in sex. It is not a secret that many considered it a very simple matter. Several kisses. Several touches. Several penetrations. Ready. No, this is the most down-to-earth point of view. Everything lies much deeper.

And the girl who was now lying under Lunara was proof of that. The Jaguarundi's dexterous tongue was sliding over the brunette's left nipple. And each contact with this hard tubercle forced the predator to exhale a hot stream of air. Although she could enjoy every part of a woman's body, but breasts were her favorite part.

Her left palm slid down and rests on the Korean girl's right breast, starting to massage it. With every passing second, Lunara increased her pace. Experience told her that with a girl like Grace, you can't keep the pace at the same level for a long time. Therefore, her left palm squeezed her rival's chest harder and harder. While in addition to licking and kissing Grace's left nipple, Lunara began to lightly nibble on this bump. The blonde's lips curled into a grin as Grace asked her to wait and stop.

"No way," she whispered, not interrupting the caress towards the brunette's pale boobs.

Their legs were intertwined and Lunara felt that Grace's thighs were already wet, the juices were already warm down her legs. And she saw no reason to stop. Her left palm released the Korean girl's right chest and went down. The blonde's soft fingers ran along the torso of her rival and finally settled on the bottom of her bikini.

At first, Lunara was in no hurry, her fingers only sunk under the fabric. Oh, it was really wet there, it made the predator smile. The blonde dropped her hand lower, and then gently touched her ring, middle and index fingers to Grace's pussy. Without any sudden movement, she moved her fingers up the length of the Korean girl's pussy. The clean-shaven wet pussy was very pleasant to the touch and she didn't want to waste time. Continuing to suck on the brunette's nipple, Lunara began stroking the young girl's pussy, wishing her bikini was wet through and through.
_________________
skip-stop's characters