Flips and Kicks- Cobra vs Dmitri!

*The aerodynamic anaconda tore through the air like a tomahawk, his mind sharpened like a knife and his vision abundantly clear- He was going to effectively quell any and all trace of hope Dmitri potentially had of mounting a comeback with this explosive body flip! To his chagrin however, the spunky striker was still conscious enough to conjure up a counterattack, introducing his shins to his vulnerable midsection!*

"Guhooof!" *The sudden, stunning impact sent the reptilian acrobat rolling across the ring, clutching his stomach to try and ease the unfathomable pain he was experiencing.* "Gghhh...ssss...so much pain..." *He forlornly hissed aloud, physically incapable of focusing on anything else outside of the lingering anguish he was experiencing, sprawling out across the canvas as still as a statue.*

Yeah, just as Dmitri figured, it wasn’t exactly a happy time for him. He wasn’t sure how much Cobra weighed, but it was mass to create some serious pain for him when the guy came down right on his legs and compressed him against the mat like an accordion, making his legs hyperextend or stretch out or...something. He wasn’t sure what the right term for it was, only that it sucked.

But it was worse for Cobra. Much worse.

Dmitri rolled over and fought his first instinct, which was to go for a pin. Too early, probably wouldn’t even get a light two count, and he figured his time would be better spent pouring on his own pressure.

He moved in and grabbed his opponent by the head, getting a tight grip and lifting him up into a sitting position. He would only need Cobra to stay that way for a second - long enough for him to move back, take a quick step to the side, and hit him with a sharp kick in the back of his spine, hammering his bones.
_________________

*Still reeling from the debilitating stinging sensation that lingered throughout his midsection, Cobra subsequently rolled onto his side to try and collect his thoughts.* "Ggnnh...thissss...isssn't good..." *He plaintively muttered under his heavy breathing, feeling his concentration start to return. However, his best intentions would be interrupted by Dmitri's indomitable will, forcing the groggy python to sit upright for a moment.*

"Hmm?" *Quietly pondering as to why he was forced into this awkward position, he would quickly discover the reasoning behind it, as the swift-footed striker launched a crippling kick against his vulnerable backside, sending him into a massive spasm from the agony upon contact!*

"NNGGGHH!" *Having interpreted this skirmish as nothing more than an easy victory, Cobra's narrow eyes had finally been opened to the true potential of Dmitri's kicking potential- The shot sent Cobra rolling forward, eventually crawling towards a vacant slice of the arena to try and recuperate a sliver of his lost vigor.* "Grrhh..d..damn.." *He shook his head, refusing to acknowledge his dire situation as he turned himself around to face the tactful martial artist!*

The crowd winced, the referee winced, even Dmitri winced when he landed that kick, and not without good reason - that one had to hurt. He rarely landed a blow that clean, one that cut that deep, and there was no ignoring the effort. It felt like chopping down a tree, and he could only imagine how it felt on Cobra’s spine. His bones had to feel like they were on fire.

And Dmitri had every intention of making it feel worse.

Instead of following right after his opponent, he ran in the opposite direction, moving toward the far corner. He turned around before he hit and bounced off with his back, then broke into a hard run, crossing the ring at full tilt.

By the time Cobra was up and sitting in the corner, he’d be greeted by a startling sight - Dmitri, dashing straight towards him. The Japanese martial artist leaped at the last moment, shot both of his legs out, and hit his opponent with a dropkick of his own - this one came in low, meant to hammer him against the turnbuckles with all the weight and momentum he could muster.
_________________

*Remaining sedentary after the brutal assault on his physical form, Cobra remained remarkably aware of what was transpiring- Dmitri was managing to control the reins of this battle rather well, but that wouldn't dissuade Trent into conceding anytime soon.*

"W..we aren't..f..finished yet.." *Struggling to regain his prior footing, Cobra managed to climb himself onto the second turnbuckle. However, much to his chagrin, he had momentarily lost sight of his opponent- Something he would instantaneously come to regret, as the nimble kicking specialist slammed his both shins into his stomach in tandem!*

"GGGUUHH!" *Unlike the previous assault on his midsection, the brunt impact from the raw force of Dmitri's lightning fast attack dropped Cobra onto his backside, clutching his intestines as if he had absorbed a shotgun slug to his ribs!* "Uhhh...gggnhh..." *As he flailed and squirmed against the arena flooring, the audience began applauding his efforts, having earned their favor with his fantastic display of fierce footwork!*

Dmitri’s attack connected and worked well, having a profound impact on his opponent. He’d seen a man in this state before, sure, but only when he was watching his videos back on the AFW Network - most of the time, he was the one left sprawled out and hurting, caught off guard by some woman’s attack and laid out. It had been so long since he’d mounted a solid offense on his opponent that he’d almost forgotten how exhilarating it could feel.

And now came the part where he tried a pin.

He dropped down over his fallen foe, grabbed him by the leg, and leaned against his chest, putting him down for the pin. He wasn’t confident it would work, but it was worth a shot, couldn’t hurt, might put some pressure on him.
_________________

*As his body continued to tingle from the brutal assault on his midsection, Cobra vaguely heard the audience off in the distance applaud and congratulate their champion, indicative of what his next move might potentially be.* "Nhhh..not...out of it yet..." *Feeling the sudden pressure against his body, Trent instantaneously recognized what was happening- Dmitri decided that attempting a quick three count would light a fire underneath his reptilian foe.* 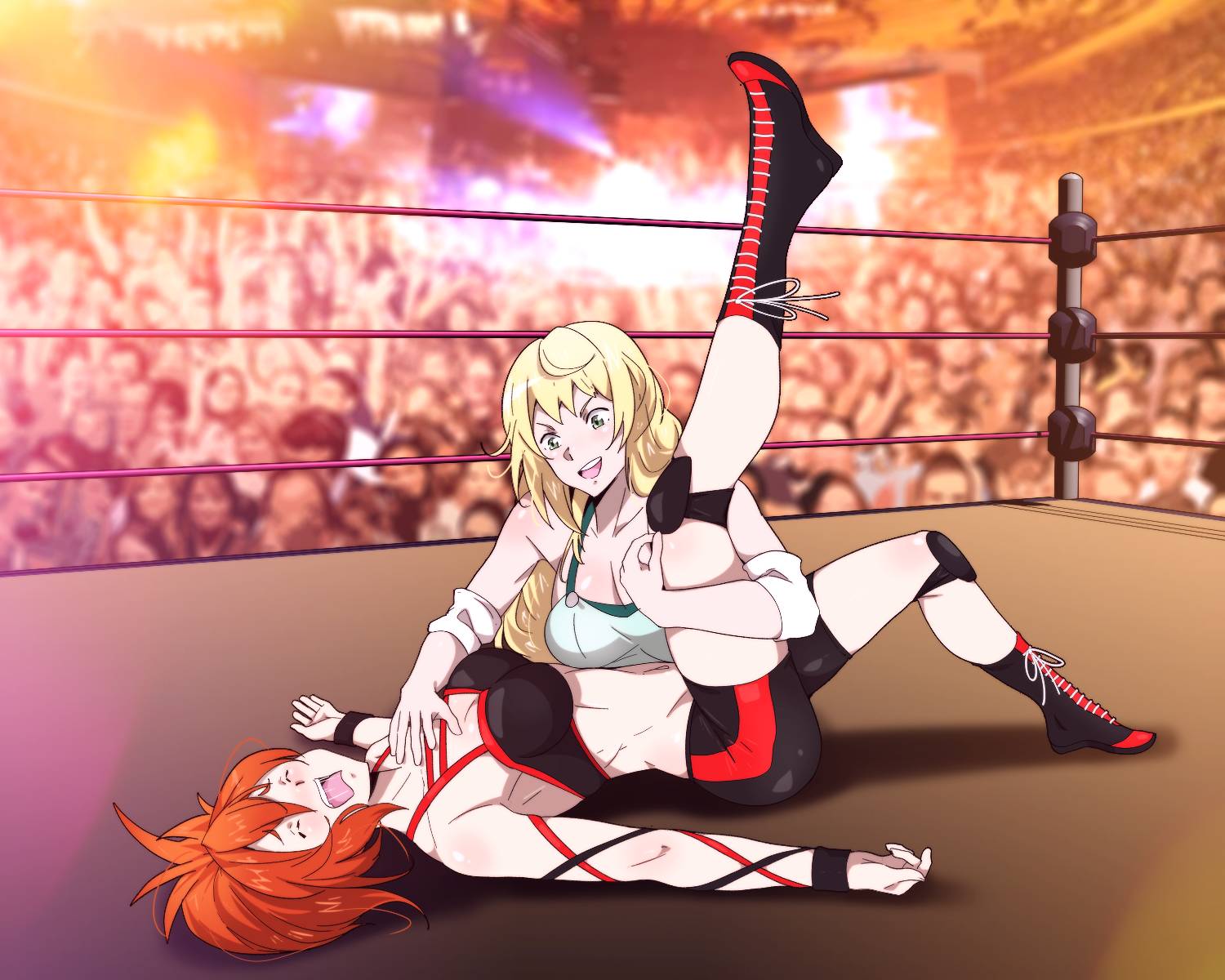 "ONE!" *The moderator slid into the arena, slapping the palm of his hand against the ground. The shockwave managed to reach Cobra's ears, coaxing him into rotating his shoulder sideways to break the count before it reached the next digit.* "N..no you don't!" *Slightly agitated after the embarrassing barrage of blows he received, the vehement viper swung his leg around to try and smash his shin into Dmitri's ribcage!*

Cobra kicked out of the hold, got his arms up well before the full count could happen. That wasn’t unexpected. If anything, it would’ve been a shock if it had worked, and might’ve even been disappointing - Dmitri wanted a win, but not like this, with those kinds of terms, so quick and unsatisfying. He had much more than that to show the world. It was more about applying pressure than anything.

What he didn’t expect, however, was the attack that came right after. Most wrestlers tended to retreat after suffering a pinfall attempt, wanting to make some space while they recovered, but that wasn’t the beat the Cobra slithered to. Instead, he brought his leg up as Dmitri was getting off of him, nailing him in the side with a stiff kick that had the taekwondoin reeling. He pushed his opponent away and rolled towards the rope, clutching his aching ribs as he tumbled away.

*Launching his reinforced shin directly into Dimitri's ribcage, Cobra finally felt a vestige of relief as he witnessed his stunned adversary begin to retreat, but not before rolling the agitated anaconda away to create a chasm of distance between the two of them.* "Nhhh...not terrible~" *Deciding to go with a more unorthodox approach, Cobra unfurled his hands, utilizing his palms as a platform while simultaneously balancing himself on the balls of his feet to appear as if he were a feral predator.*

"You've opened pandora'sssss box buddy." *Sidewinding his head from left to right in a peculiar attempt to potentially hypnotize his foe with his mesmerizing movements, Cobra was beginning to close the gap between himself and his intended target, he would spontaneously vault skyward and try to slam the business end of his knee directly against the base of the lethal legged kicker!* "And it'ssss time I assssert my dominance!"

Space was what Dmitri needed and space was what Dmitri got, pulling away from Cobra and getting to his feet, only to find his opponent...crawling? It was the most unorthodox stance he’d seen in any fight ever, something the human body had little business moving into, and he had to admit it got a good shiver out of him. He knew this man leaned into the gimmick, but all the same, it was a sight to see.

In hindsight, it was probably meant to distract Dmitri, and if that was the case, it worked like a charm.

He moved in - slithered in - and launched his attack, flying up with his kick and shooting his knee towards Dmitri’s face. The blow landed clean on the kicker’s chin and sent him reeling, dropping him flat to the floor. Dazed, he worked on instinct and rolled under the ropes, dropping to the floor and staggering away from the ring as he reeled.
_________________