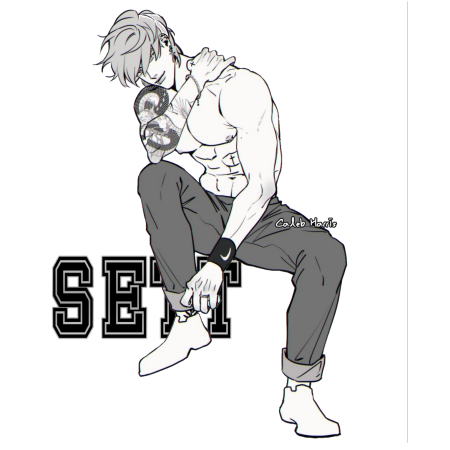 Match Type: Standard
Victory Conditions: Victory by pinfall, submission, or knockout.
* * *
Army had taken on a wide variety of opponents in his time with the AFW.  Kinky sex ninjas.  Barefisted prizefighters. A jealous, sex-crazed cyclops maid. His own girlfriend. Enough of a range that, really, there shouldn’t have been too much that came new to him.

But there was one sort of opponent he’d seen little of as a wrestler, who’d never crossed his path. A rare, elusive opponent that Tension males just couldn’t expect to face in their time, that precious few of them would ever come across. Something new, something fresh, something totally outside of the norm.

It was kind of a weird thing to realize, and he found himself reflecting on it as he warmed up in the back, taping  up his fists with the help of his cousin, Felina. As a boxer, it seemed certain that his entire career would be taking on other men, would’ve been weird otherwise. But when he’d followed his sister to the AFW on a lark, he found himself taking on more and more ladies, getting used to it, and what he’d planned on being a sideshow in his life somehow turned into the main attraction. Strange the turns life could take.

”And there. You. Go.” Felina cut off the tape with some scissors and finished off his left fist, leaving it nice and padded. She gave his knuckles a tap, then pushed the arm away and moved onto the next. ”Sure you’re ready for this?”

Army had been drifting in his thoughts for a moment, but her question brought him back to reality with a furrowed brow. ”Ready for a match? I mean...yeah. Always ready.”[/colo]r

”Well, no shit. I mean to fight another guy.” She reached up and gave him a quick thwip on the forehead, before she started her work again. ”How longs it been since you took on a man?

Army opened his mouth for a quick answer, then snapped it back when he realized he wasn’t totally sure. It couldn’t have been that long, right? He had a match two weeks before he shipped out to Japan, against… ”Danny Gonzalez, right? I took on Danny before I left, and that was...shit, almost five years ago.” He blinked, a little dazed. Saying the time out loud made it more real, somehow. ”But so what? Guy, no guy, penis, no penis. Doesn’t make that big of a difference.”

”Yeah, okay.” Felina had a small laugh, barely a giggle, looking up at him with those sly cat eyes of hers. ”There’s a different rhythm to it. I swing both ways on fights all the time, you know I know.” She shrugged and picked up the scissors, ready to cut off the tap and finish up, knowing he was scheduled to come out soon. ”Just keep your guard up.”

‘Keep your guard up’. Not exactly stellar advice, but he’d roll with it.

A few minutes later and Army was making his way out of the gorilla position, heading down the ramp with Felina trailing close behind, his theme music blaring behind him. The audience seemed a fair bit thinner than he was used to, but he guess that shouldn’t have surprised him. A lot of them were probably using this for the bathroom break - after all, they’d come here to watch girls beating around guys, not two men grappling. They could get that a dozen other feds.

A match was a match, though, and he wasn’t going to let it bother him. He rolled his way into the ring as Felina found a nice part of the apron to lean on, and promptly made his way over to the furthest corner. Army threw a few quick jabs and used the ropes to stretch out, getting nice and limber as his music began to die down...
_________________