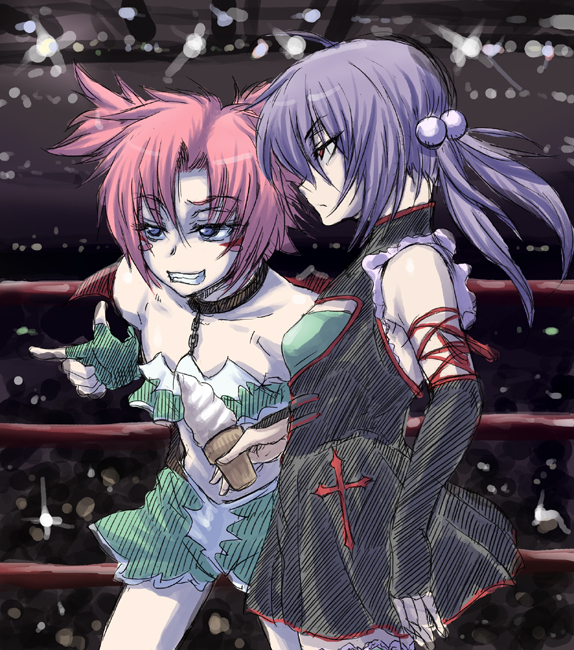 Team Signature:
Call To The Void - Mystic braces an opponent over her knee in a backbreaker position while Succubus climbs the top rope. Keeping them steady with their head exposed, Succubus leaps high and comes down to deliver a decapitating elbow drop into their opponent's face.

Synergy: Unbridled chaos best defines what Hellfire stands for. As a wicked pair, victory is their ultimate objective, but only on their terms while indulging their mutual vices. Destroying the enemy isn’t satisfying if they can’t have their way with them first.

Succubus seeks pleasure and humiliation, while Mystic seeks a righteous sacrifice. To this end they always feel the need to go all out and take no prisoners. In spite of their interests being mutually exclusive, these two ne'er do wells have complete faith in one another to pull their weight and not mix in each other’s business. At least at first.

While Succubus acts as the self-appointed leader of their duo, Mystic is typically the one with enough foresight to sense danger or fortune ahead. She sees herself as the mind, Succubus the spirit, together of which they form the body. They’re capable of holding their own despite all appearances. If the match is going in a poor direction, however, they have a tendency to blame one another and have a breakdown of communication, making them less likely to come to each other’s aid.