Search
Latest topics
» Canon characters and pics checker
by SuperHeel Today at 2:38 am

» An Unexpected Reunion! (Grizzley vs Garm!)
by Tarantulust Today at 2:09 am

» Glória Dyer-Gym Trainer
by Chaos Today at 1:35 am

» Zetton Vs The Nomu! A shifting force against an unbreakable object!
by Tarantulust Today at 1:27 am

NO ESCAPE THIS TIME! Kazuma Satou vs Akane Asahioka

NO ESCAPE THIS TIME! Kazuma Satou vs Akane Asahioka

When he was told that he was going to have a cage match, Kazuma had initially thought he was going to be alright. A bit roughed up but he figured he'd be able to manage a win......that was before he was told that his opponent for the evening was AKANE ASAHIOKA! He shuddered as he recalled their brief first/last encounter at the pool all those months ago, especially because of how he narrowly dodged the angry bullet that was her partner, Juno Lane.

"Maybe I can say I'm sick? I'm sure they could get someone else to fill in for me." Kazuma said as he sat on the bench in the locker room. Even though their encounter was so long ago, to him it was way too soon to see either of them face to face again. Kazuma was about to leave the locker room and report his "unwellness" when he heard a commotion going on out side. When he stepped out he saw a whole mob of stage hands and some of the wrestlers rushing about.

"He's not in the Janitor's closet!" yelled one of them.
"He's not in catering!" yelled another.
"Where is he?!" Asked one more. Finally one of them turned towards Kazuma "THERE HE IS!" The mob stopped what they were doing and quickly approached Kazuma.

"Kid, we need you to compete tonight" said one of the stage hands. "W-What? Why?" Kazuma asked. "Last time Asahioka and Lane were here Lane tore through this place trying to find her opponent and that's the last thing we need!" The stagehand explained and while Kazuma could understand their fear, especially considering how close he was to being on the receiving end of it, there was no way he would go out there!

"Look guys I get it but- OH MY GOD IT'S JUNO LANE!" Kazuma yelled as he pointed in a general direction, looking to distract the mob, before he ran off! "GET HIM!" the mob quickly chased after Kazuma and so began a epic chase in the Tension backstage area unlike any seen before. Hijinks would quickly ensue as Kazuma pulled every trick in the book to avoid being caught; he hid behind things and waited for them to move on, he disguised himself and sent the mob in the wrong direction, somehow the two parties pursued each other back and forth through a series of doors with Kazuma somehow chasing after the mob at some point.

Eventually though his luck ran out and the mob managed to catch him and bring him to the gorilla position. Kazuma would've tried to run again but the mob made sure to secure all points so with no other choice Kazuma stepped through the curtain as his music played. Kazuma slowly approached the cage enclosed ring, not stopping for pictures like he normally did.

"Maybe they won't remember me. I mean it was months ago, I'm sure the two of them have had more interesting things to happen to them since then. There's no way they'd be petty enough to hold a grudge for a harmless "little" peeping incident that didn't even go anywhere further than that." At least Kazuma hoped that would be the case.
_________________
Satou Kazuma
Sachiko Kanda

After months Juno was finally gonna kill that bastard. For too long had he been hiding from her, escaping her, and being lucky enough to have Akane distracting her with sex! But no more! Finally she had a scheduled match, one set in a cage to keep Kazuma trapped inside with her! It wasn't long after Kazuma arrived that Juno would come charging out herself. Stomping straight out, the beast woman would charge down the ramp and make her way to the cage. 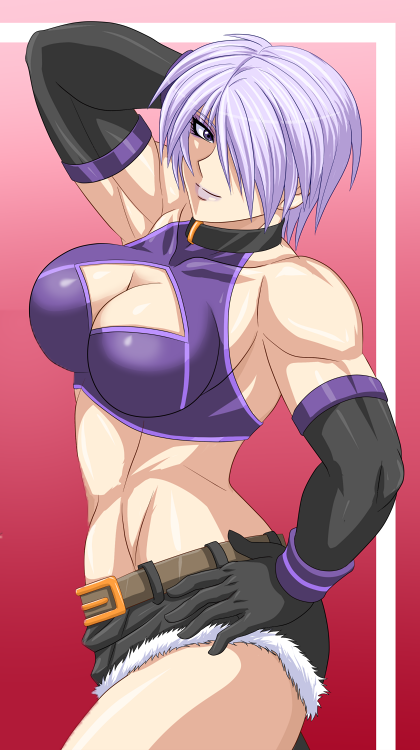 Juno was wearing her black jeans with only one leg, matching boots, and a purple top with an open boob window for all the fans to ogle. A huge, menacing grin was on the woman's face as she walked right through the opening and slid into the ring. Standing up straight as she stared straight at Kazuma like a tiger drooling over a rabbit. As the cage door closed shut, Juno would crack her knuckles as she got ready to crush the weak, perverted bug that stood before her.

"So...you're into cucking, huh?~" the French woman asked as cracks echoed while she squeezed her right fist. "Well I'm pretty kinky myself...so I do get it...but I'm gonna kill you anyway." Juno laughed sadistically. It was at this moment, that Kazuma NEEDED to pray to any god that would have mercy on his soul...
_________________
Caboose's Friends List

As Kazuma waited he had hoped that Akane and Juno wouldn't show up, remembering how amorous they were in the pool he had hoped that the two women would simply lose track of time in each other's company and he'd win by forfeit....or something. The thought of having Akane to himself for an evening was tempting but the risk of having her lover, Juno Lane, hunt him down until she reaped some sort of horrible vengeance upon him definitely canceled it out.

It was then that Kazuma heard a bizarre mixture of cheers and gasp out from the audience and when he turned around he saw someone coming down the ramp.....only it wasn't Akane, it was Juno! Kazuma could feel himself begin to sweat as he saw the savage grin on the French woman's face. "It'll be okay as long as the door to the cage is closed she can't-" Kazuma began to think to himself, only for the stage hands by the door immediately open it in a panic, giving Juno unhindered access inside to the cage before closing it behind her as soon as she slid into the ring.

The match hadn't even officially started and now he was already in a dire situation! Kazuma felt like a rabbit as Juno looked at him like a tigress eyeing her prey. Kazuma would blush a bit as her clothing made her look quite attractive to him but before he could admire it, he'd hear Juno ask him if he was in to cucking and her sadistic laugh made him even more nervous. D-Did she remember him?! No way it had been months since they last saw each other and even then Juno couldn't have gotten a good look at his face given the fact that he had been hiding in the bushes at the pool while she was tied up!

Maybe Kazuma could play it off as a case of "mistaken identity" and explain how he had no intention of getting between the two lovers. "Cucking? I don't know what you're talking about! I believe you may have mistaken me for someone else! I would never try to get between a woman and her.....woman." He nervously began to explain. "I-In fact, even if by some chance I did happen to win this match I would've handed Akane back over to you for the evening. As my "prisoner" she'd have no choice but to be subservient to me or anyone else I say she has to listen. So how bout it, if I win you can have Akane ALL to yourself?" Kazuma asked, praying that Juno would accept this on the spot, desperate deal he had come up with.
_________________
Satou Kazuma
Sachiko Kanda