Search
Latest topics
» A Reunion of Sorts (for Daaharu)
by Underdog21 Today at 5:03 am

» Backstage Encounter With The Queen of Queens
by Underdog21 Today at 4:35 am

» Salma Mariela Lambert (D) Vs. Sachiko Kanada
by Mart-Kos Today at 1:56 am

» Tension Title Belt matches
by SimplyMoon Today at 12:16 am

Akiho wasn't enjoying this at all, not one bit. She wasn't used to be dominated so thoroughly, and she didn't want to start now. But it seemed like her cruel opponent wasn't giving her any choice, and providing absolutely no opportunity to counter. The mat was stained with various fluids, an alarming portion of which had originated from her body. She managed to weakly raise her head and view the massive screens affixed around the arena, finally able to accurately survey the damage.

"WHAAAAA!" Akiho wailed around in agony, unable to process the conflicting sensations of pain and pleasure that were coursing throughout her body. To add further insult to injury, she felt Yuri's fingers jab into her pussy, aimed straight at stimulating her sensitive g-spot. Akiho couldn't help it, the tears flowed freely now, stemming mostly from the sheer embarrassment and humiliation she was having to go through now. She had sustained far too many injuries, and her debut image was already in shatters - surrender seemed like the only option.

She bucked and twitched on the mat, her pussy simply not able to take any more. She felt herself already near the bursting point, her pussy completely oversensitized from the skillful fingers of Yuri-chan. Juices began to leak and added yet more viscus liquids to the already slick mat, coating both herself and her opponent's hands, but not quite unleashing in a bursting orgasm quite yet. Finally she complied with her tormentors demands, hoping to end the humiliation as quickly as possible. 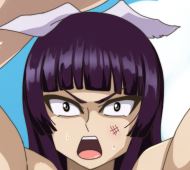 "Honestly, I'm pretty impressed with you Akiho," Yuri said, "You almost had me several times there. But unfortunately for you you just aren't good enough to beat me!" She ground her foot down, pushing her toe deeper into Akiho's already punished ass. "Now, shall we move on to the really fun part?" Yuri reached down and grabbed Akiho by her hair, pulling her head up so everyone could see her ruined face, while her other hand reached out and grabbed a collar and leash from the hands of the referee.
_________________
The Party!

With the match finally over, Akiho finally got some much needed reprieve - or so she thought. Soaking in her own juices and beaten to the brink of destruction, Akiho was left contemplating how she could possibly recover from this. She didn't have too much time to ponder, as she soon felt a strong kick to her already bruised ass. "UMPHG!" Akiho let out at yelp ass soon as Yuri's foot made contact with her bruised ass. Her insides had been so torn up that the pain was starting to seep through her muscles and making her whole bottom sore to the touch, and Yuri's continued roughness sure wasn't helping.

The kick was strong enough to turn her over onto she lay stomach first on the mat, her face and the rest of her body flopping on the cum-covered canvas, some of it even finding it's way into her agape mouth. She felt her opponent's foot come crashing down once more, letting out yet another groan as she felt her violated hole being invaded once more by the cruel girl's toe. The push was enough to smother her body even further into the mat, forcing her to taste and bath in more of her own juices.

Akiho was flabbergasted at how close she was to victory, and how quickly she had lost it all. Her opponent made similar remarks, taunting her naivety and poor fight logic. She would receive no mercy despite having put up a good fight, instead being greeted with only further shame at the hands of the opponent. She watched helplessly as her opponent retrieved a leash and collar from the referee, her eyes widening upon realizing that her torment was far from over.

"Yuri-chan... please just stop... you've won already!" Akiho yelled out after feeling herself being forcefully yanked up by her hair. She never though she would find herself in a position begging for mercy, let alone in her debut match, yet here she was. She knew deep down that her request would probably fall on deaf ears. Besides, she was sure that if the situation was reversed, she would probably be showing the same level of brutality and torture to her hated foe. Still, she pleaded, too bruised and battered to resist whatever humiliation Yuri had planned for her, instead solely relying on some semblance of mercy knowing full well she deserved none.
_________________
LIL ROYAL'S SEX DOJO

"Yes, I have won," Yuri said as she wrenched on Akiho's hair to pull the wannabe heel's head higher, "But that doesn't mean it's over. After all, you weren't going to be so merciful to me if you had won, were you?"

She pulled Akiho's head higher, forcing the teen to stretch and expose her neck. With a flourish, the idol brought the collar she held in her other hand around and snapped it around Akiho's neck. Though this was not a POW match, Yuri still planned to take Akiho as her newest slave as punishment for even daring to face her. The fact that Akiho put up such a fight, humiliating Yuri multiple times and even ruining her face, only made the idol want to punish her ruined opponent even more.

"Just be glad I won't punish you any more in front of this crowd," Yuri said, letting Akiho's head drop back down into the puddle of their sex juices. The idol had enough of this public display. The crowd was booing and jeering at her, though they very much enjoyed seeing Yuri's antics she was still the evil and devious heel that they loved to hate, and that hate was on full display. Yuri had already put on enough of a show for them, they had gotten to see her beat up and fucked hard, and she didn't have any stomach for giving them more.

So she tugged on the leash, forcing Akiho to get up as she dragged the beaten heel out of the ring. "Come on Akiho! You and I are going to have a lot more fun tonight!" Yuri said, her devious grin reappearing and filling up her entire face.
_________________
The Party!

That was it. The match was finally over, culminating in a humiliating debut for the teen heel. Recovering from such an embarrassing blow to her career would be a truly herculean task, but at the moment it seemed like more terrifying possibilities were at hand - mainly her continued torture and humiliation at the hands of her ruthless opponent. The match didn't have any POW stipulation, but that didn't stop the idol. Akiho groaned at her opponent's remarks, knowing full well that every word was true.

If the situation was reversed, Akiho wouldn't be showing the idol even an ounce of mercy. She may very well have claimed her as a sex slave as well. Her thoughts continued to dance around in her head, whimpering at the impending punishment that awaited her. The crowd viciously turned on her, bellowing at the defeated heal as was expected. She had put up a good show for them, but at the end of the day, she was still just a caricature for them to cheer or boo at as they please.

She let out another yelp as she was roughly pulled back up by her hair only to be dropped down into the mat, splashing into a puddle of their amalgamated fluids. She had released so much of her juices tonight, and here she was being left to soak in them. She failed to see how her opponent was going to extract any more juices out of her, but who knew what devious sexual torture Yuri had planned for her. With the collar and leash securely in place, Akiho was shamefully dragged out of the arena at the tug of her opponent, subjugated to continued physical and sexual ravaging at the whim of her foe.