Alaina was clad in her one piece tiger print swimsuit, kneepads and boots as she checked herself out in the mirror backstage. She had been doing a lot of soul searching lately and knew that this match was going to be big. The last time she fought Yuki the young wrestler was a rookie who Alaina steamrolled until Yuki came roaring back to pull off a big upset victory over the amazon. Alaina was a tag partner with Yuki in a tournament not long after. She really liked Yuki, but this match tonight was going to be a sort of vindication for Alaina.

She knew that her position in the rankings was threatened so pulling off a win against a woman who had beaten her before was going to be a big one for Alaina. This time it was the older wrestler hungry for the win.

As her music played Alaina came out into the arena to a loud roaring crowd who cheered her arrival. She stood at the top of the ramp waving to the crowd and flexing for them, winking before strutting her way down the ramp with clear confidence. She high fived fans all the way down the ramp with a big grin on her face quickly making her way to the ring. Alaina jumped up onto the apron before climbing through the ropes, eager to get her slam game on against Yuki. She was not going to be caught off guard so easily today or so she hoped.
_________________
"The Amazon" Alaina Sanders-Friction
Suzumi Ishikawa "The Tsunami"-Friction
Peggy McIntyre-Friction
Hikaru Sawazaki-Friction
Rosa "Crusher" Cabrera-Friction
"JJ" Janella Johnson-Friction
Raquel Masters-Friction
Lauren Fredericks-Friction
TAG TEAM
The Irish Amazons

It felt weird to have nothing wrapped around her waist after being the Rising Star champion for a while, and Yukina would need to get used to it soon. And now, she would be going to have a rematch against Alaina, and she thought that things might be different now compared to the last time they faced each other.

Clad in her white-and-blue leotard, Yukina made her entrance, making her way out to the ramp as her music was played. Despite her no longer being the Rising Star champion, the crowd cheered for her, calling her the Rising Star. Yukina smiled, knowing that while people might stop calling her that eventually, she liked that people were invested in her. 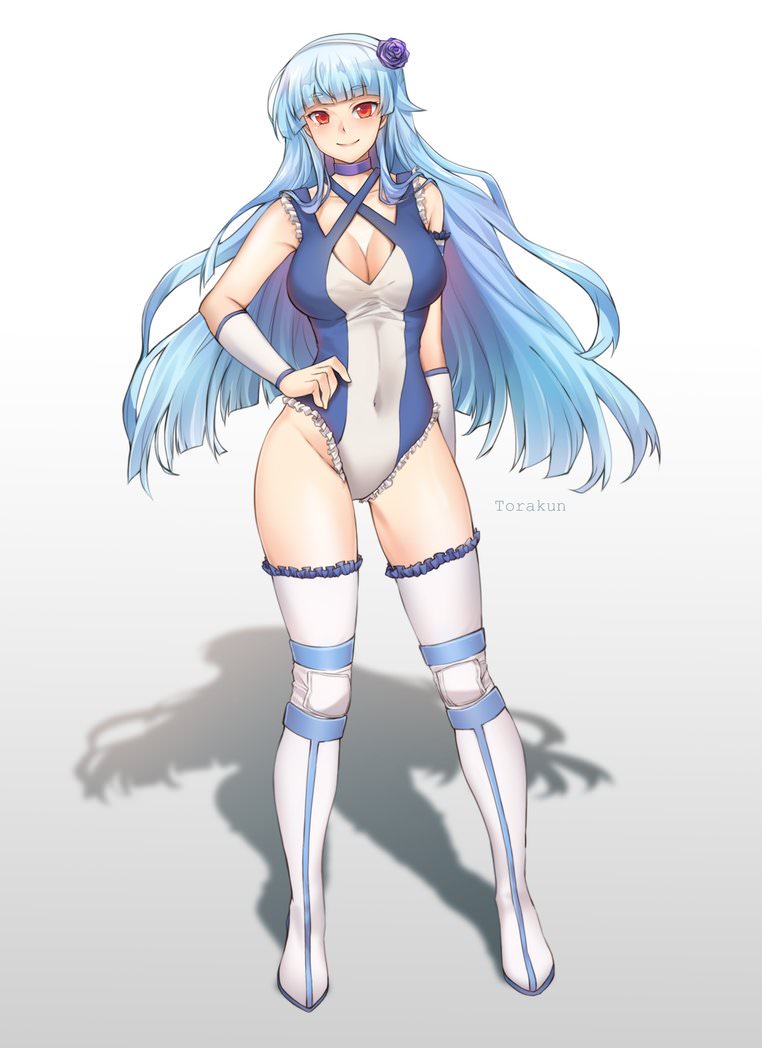 Once she reached the ring, she climbed up the apron and entered, getting herself inside. Getting the crowd to cheer for her some more, she would then look at Alaina. She knew that this wouldn't be easy, considering that Alaina was a much bigger and more experienced woman compared to her, but she was confident in her ability as a wrestler.

"Long time no see, Alaina-san." Yukina greeted her opponent. "Let's have a good match." She would approach the Amazon, looking to offer her a handshake as a sign of sportsmanship.
_________________
THE HALL OF RADIANCE
~click above to see my characters and their availability~

Alaina watched Yukina enter and heard the cheers of the crowd. The amazon had her work cut out for her and would have to wow the fans to keep them cheering for her against the rising star. Alaina vowed this would be different than their last match.

As Yukina approached Alaina smiled and nodded to her, happily shaking her hand. "It has been too long and you have been incredibly successful! I will do my best tonight and give it my all to come out on top this time." Alaina said as the two shook hands.

Yukina smiled at Alaina as they shook hands. Then, she stepped back, readying herself for the match. She knew that while she might have defeated her last time they met, things might be difficult this time. Hopping on the balls of her feet to prepare herself, she would then step forth, ready to face the Amazon.

When the bell was rung, Yukina would surge forth and engage Alaina in a grapple. Her boots skidded against the mat as the two of them locked up. She gritted her teeth as she would try to push Alaina back, though it seemed that the Amazon might be stronger than her in terms of pure strength, and she might end up being pushed back as a result.
_________________
THE HALL OF RADIANCE
~click above to see my characters and their availability~

Alaina saw the grapple coming and braced herself, eager to lock up with the young wrestler! Alaina was stalled out for a second before she surged, trying to back Yuki up as quickly as possible to crush her back against the turnbuckle! Alaina out everything she had in to the p8sh knowing the harder that Yuki hit the corner the better off things would start for the amazon!
_________________
"The Amazon" Alaina Sanders-Friction
Suzumi Ishikawa "The Tsunami"-Friction
Peggy McIntyre-Friction
Hikaru Sawazaki-Friction
Rosa "Crusher" Cabrera-Friction
"JJ" Janella Johnson-Friction
Raquel Masters-Friction
Lauren Fredericks-Friction
TAG TEAM
The Irish Amazons

Yukina was pushed back by Alaina as they grappled, and she gritted her teeth as she tried to resist the push. Eventually, her back touched the turnbuckle, and she knew that she had gotten herself beaten in strength department. The Amazon had shown herself to be far stronger than her in terms of physical strength, and she had to admit that it was true.

Still, there was more to wrestling than just physical strength. Yukina tried to figure out what to do as she would then try to free one of her arms so that she could attempt to hit Alaina right at her side with a sudden chop.
_________________
THE HALL OF RADIANCE
~click above to see my characters and their availability~

Alaina had Yiki against the ropes and thought she was in a hood position to inflict some damage. That ended up being true for Yuki! The amazon groaned and stumbled back a step. She tried to step back in taking. a wide swing to send her own chop right to the chest in retaliation!
_________________
"The Amazon" Alaina Sanders-Friction
Suzumi Ishikawa "The Tsunami"-Friction
Peggy McIntyre-Friction
Hikaru Sawazaki-Friction
Rosa "Crusher" Cabrera-Friction
"JJ" Janella Johnson-Friction
Raquel Masters-Friction
Lauren Fredericks-Friction
TAG TEAM
The Irish Amazons