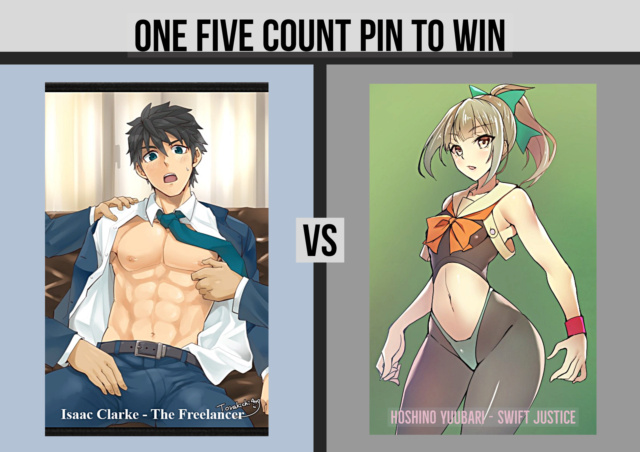 Isaac flashed a charming smile back at his slender opponent.
"I can assure you that things won't be so easy with me..." Now fully undressed from the waist up the gentle powerhouse raised his hands in front of Hoshino. "How about a test of strength? I promise not to go overboard..." The big man cringed a bit at his own words.
Overboard was how thing went more often than not.
While Hishino and Isaac chatted Jason took the opportunity to slip out of the ring and slink up the ramp. He had enough humiliation for one night.
_________________
Howdy i'm WrestleMind and there's nothing i appreciate more than honest feedback and discussion. Wanna tell me I suck? You would make my day!

Hoshino placed her hands on her hips, smiling at Issac as the handsome hunk undressed and made his declaration. "I certainly hope you'll put up a better fight!" she said, "That cocky one went down after only a few hits, but you look sturdier than he is. Hope you can it!" She stretched out a little bit, getting her muscles warmed back up after their little break. Her match against Jason ended so quickly Hoshino had just gotten her blood flowing. Now she could go up against Issac firing on all cylinders!

When Isaac offered a test of strength to start though, the smaller gymnast laughed. "Ahh Issac, you're bullying me already!" she teased, "I'm so much smaller and weaker than you, and you want to test my strength? How unfair!"

Sticking out her tongue, Hoshino raised her hands and interlocked her fingers with Isaac's, accepting the test of strength. "Well, if you promise to go easy, I can't be a bad sport and refuse!" Hoshino said. She grit her teeth and dug in her heels, beginning to push back as hard as she could against the muscular man, knowing full well that Isaac was probably going to overwhelm her quite quickly.
_________________
The Party!

Isaac chuckled heartily. "I guess sit is quite unfair. Thanks for being a good sport!" He gave the emerald haired girl a warm smile and locked hands.

At first Isaac simply stood like a tree, not budging an inch despite Hoshinos best efforts. Then he stuck out his tongue and started to press back. With his superior strength Isaac had no trouble inching Hoshino closer and closer to the turnbuckles. From there he hoped to slowly pummel the slender girl into submission.

Of course his agile opponent might just find a way out.
_________________
Howdy i'm WrestleMind and there's nothing i appreciate more than honest feedback and discussion. Wanna tell me I suck? You would make my day!

Hoshino knew she wouldn't be able to budge Issac. The man was much bigger than she was, and given his musculature probably much stronger as well. Still, it felt rather humiliating to be pushing as hard as she could and not move Issac one little bit. Gritting her teeth, Hoshino was about to redouble her efforts, when Issac decided to push back.

"Oh!" Hoshino gasped as Issac drove into her. His forceful pushing was almost enough o knocked her over. She regained her balance quickly, but was being driven back at an alarming pace towards the turnbuckles. This was a really bad situation!

Thinking quickly, Hoshino would suddenly release her hands, ducking low and to the side to try and dash past Issac. She didn't want to be trapped in the corner to be pummeled after all. The gymnast would move lightly on her feet, hoping to get behind her opponent and make a break for the opposite ropes. If strength wouldn't work, then speed would have to. She would bounce off the ropes and come back at Issac at full speed, before jumping up and delivering a dropkick right at the man's bare chest!
_________________
The Party!

Hoshino was as quick in mind as she was in body. She easily figured her situation was hopeless and switched plans on a dime. Before Isaac could trap her in the corner she slipped away.

By the time Isaac had turned to face Hoshino she had shot off the ropes like they were a rubber band and sprinted towards the big man. Taken aback by the sudden reversal Isaac froze like a dear in headlights, his arms usually hanging by his side.

SMACK
Hoshinos feet slammed against Isaac's muscular chest and sent him flying off his feet. After flopping backwards the wheezing man slowly staggered to his feet. Though he was on his knees and extremely vulnerable the gentleman couldn't help but give the lightning fast girl props.
"Damn... Your...  Wheeze Good!"
_________________
Howdy i'm WrestleMind and there's nothing i appreciate more than honest feedback and discussion. Wanna tell me I suck? You would make my day!

Her fient caught Isaac flat-footed, it seemed, as she was able to duck past the taller muscular man and bounce off the ropes to come back with a powerful dropkick. Though the gymnast was light, her speed let her build up more than enough momentum to take Isaac off his feet. Her heels impacted dead center on Isaac's chest, sinking in only a little into Isaac's muscles before he fell backwards, landing with a massive thud.

The gymnast recovered qui icky, rolling back onto her feet in one smooth motion. Isaac was talking, complimenting her, which made Hoshino feel nice but also let her realize she didn't have an opening to keep on attacking. That was a disappointment.

Hoshino would wait for Isaac to start getting back up before making her next move. Once he did, she would run at the ropes again, bouncing off and coming back at Issac at top speed. This time she wasn't going to dropkick him, when she got close enough, Hoshino would jump and spin around, pointing her toned gymnast ass right at Isaac's face to hit him with a powerful butt slam!
_________________
The Party!