He felt that he could win as he's on a seventy-seven winning streak, never loss a match or had a draw in his career yet. So, he was confident that he was gonna to make seventy-eight tonight.

Daisuke hears the ring announcer calling out his name and his entrance theme: Root of All Evil by CFO$ feat Incendiary. Knowing that he was his cue, Daisuke walks to out to the entrance ramp,receiving a good pop from the crowd as some of them recognize him from his indies days. 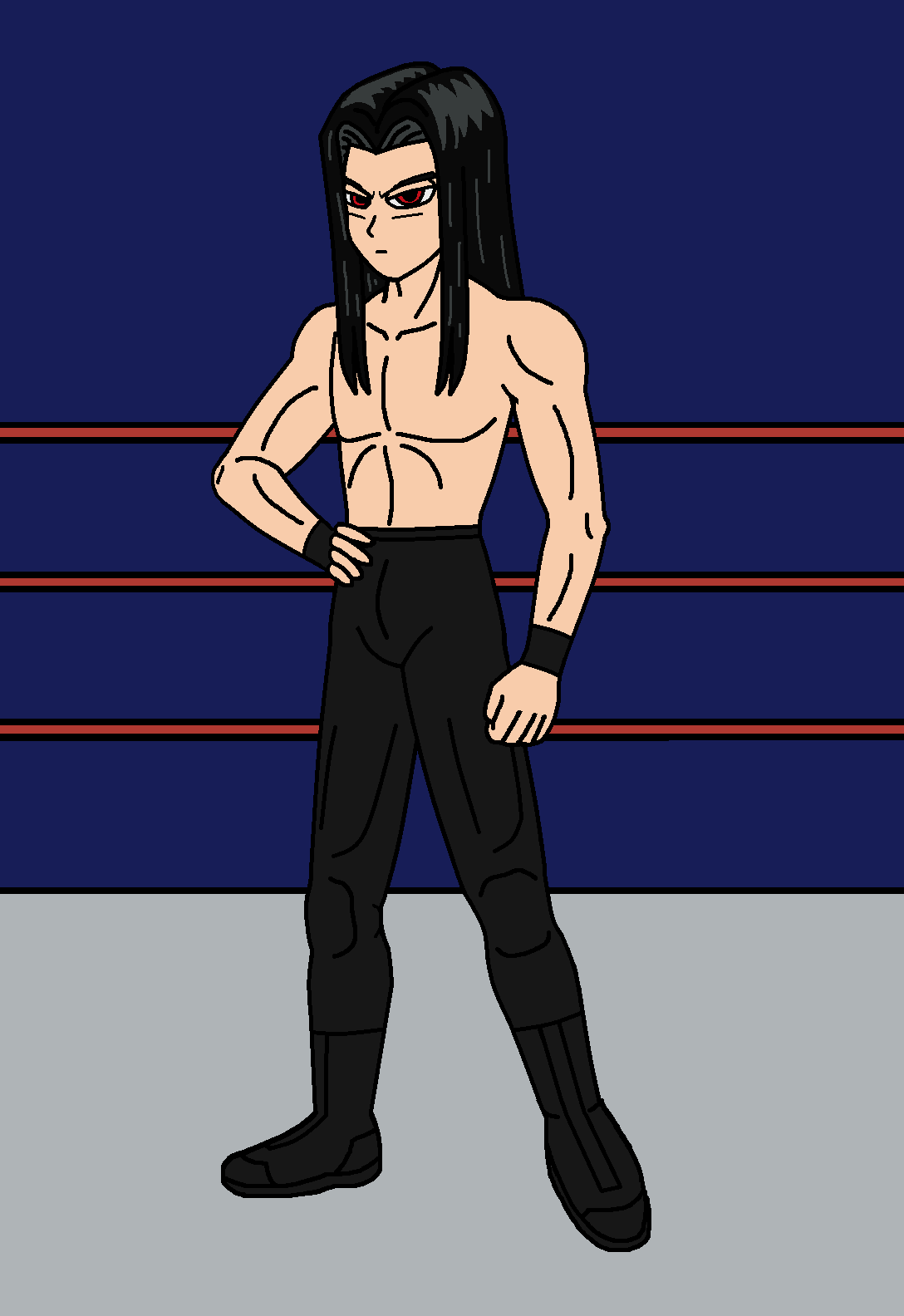 She had been eager to get another match in in the ring, to demolish some poor girl with her usual blend of high-flying moves and heelish tactics, and to be the villain at the centre of everyone's attention was just a little while. When she had heard that she was being pitted against a newcomer in Tension, it had been perfect: she always enjoyed humiliating newbies, and it if it was a guy, then she would have been able to have just a little more fun teasing him all the while. After all, who could could resist some tactical flirting from a sexy thing like her?

If anyone had known of the behind-the-scenes drama, they wouldn't have been surprised at how pissed Maria looked when she came storming down the ramp. 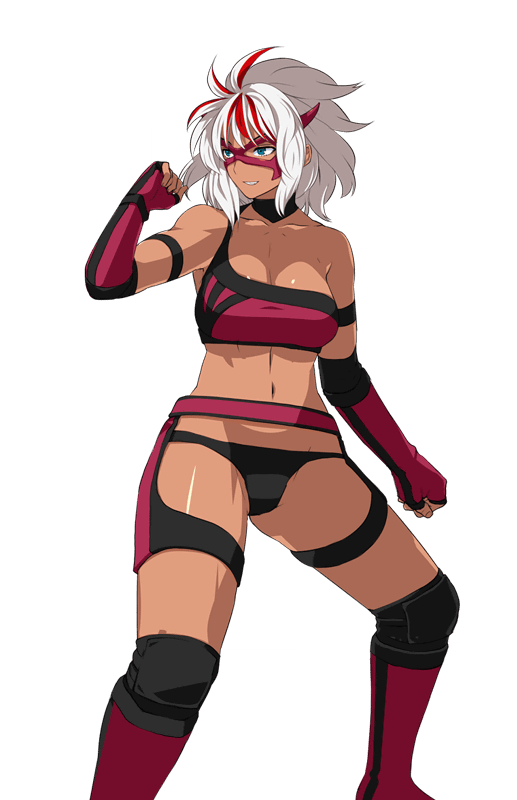 As Maria walked down the ramp, she caught a glimpse of her male foe in the distance. Taking a deep breath, she forced a smile, and her angry storm turned into her usual, seductive saunter as she made her way down the ramp. With a fluid grace, she slid into the ring and used the ropes to pull herself upright, before stepping up to get a good look at her opponent-- a guy who looked fairly tough, and, admittedly, a bit easy on the eyes, though his whole 'long haird edgelord" look had been done to death, in Maria's opinion.

Daisuke watched as his opponent, Maria Tempesta, walks seductively saunter to the ring. Though, he couldn't help but think that her smile was rather forced but it really doesn't matter to him as he was focus on beating her as she got into the ring.

"The name is Daisuke and I won't." Daisuke introducing himself, then reassuring Maria that he won't go down easily while examining her. He had the height and strength advantage which he would utilizes to defeating her.
_________________
Double T

Maria noted that her soon to be opponent was sizing her up as well, looking her over up and down...no doubt, she realized, undressing her with his mind. She suppressed the urge to shudder and placed a hand on her hip. "Aww, that's good," she purred, stepping forward and sliding a hand teasingly down his chest. "I can't wait to have a little bit of fun at your expense. Maybe if you're good, I won't hurt you too badly..."


Maria would exercise her feminine wiles guiltlessly, trying to lull Daisuke into a false sense of security...until, without even waiting for the bell, she would suddenly shoot a knee up between her male opponent's legs, trying to incapacitate him nice and early...
_________________
UNDERDOG'S KENNEL:

Daisuke knew exactly what the luchadora was planning to do as she steps forward and slides her hand down his chest in teasingly manner, trying to use her feminine wiles on him into lowering his guard....but he wasn't about to do that.

And rightful so as Maria tried to knee him in his balls but Daisuke quickly lower down his hand and blocks her knee hitting his balls. Then Daisuke uses his free hand and pushes the luchadora back and away from him.

The female referee would chastise Maria for trying to hit Daisuke before the bell rung and the fans booed her for trying such a cheat act while Daisuke just stares at her, with an unfazed expression on his face as he waits for the bell to ring.
_________________
Double T

As the crowd around them boo'd, the referee got in Maria's face, shouting her down for her sneaky pre-match attack. "Get out of my face, puta!" Maria snarled, shoving the referee aside and striding after Daisuke, who was now glaring needles at her for her attempted sneak attack.

Daisuke was easily able to predictable Maria's sneak attack as she tries knee him in the ball but Daisuke blocks it and pushes the luchadora back, receiving boos from the crowd and getting yelled at by the ref while Daisuke just stares at his foe. But it seems that the luchadora didn't care what the crowd or the ref had to say as she pushes the ref aside and Daisuke and her eyes meet.

Curiously Maria thinks Daisuke is mad? Before launching at him and once again before the match even started. And again Daisuke was able to predictable the luchadora was trying to do as she looks like she was gonna try and knee him in his balls again but it was a fake out and spins around as her real intend was a snap kick aiming for the side of Daisuke's head!

But Daisuke was able to get his arm up to the side of his head and letting it took the blow instead before Daisuke lands a hard right hook to Maria's chin! Seeing the two competitor were already going at it, the ref signaled for the bell to ring and lets the match official start!

Maria had been banking on stunning Daisuke nice and early with with her signature striking, lashing out with a brutal spinning kick that was designed to leave him stumbling and dazed. Her plan, such as it was, was to keep attacking, quickly and relentlessly, to keep Daisuke on the defensive as she punished him with a barrage of strikes and high-flying moves.

Well, except that Daisuke proved he was no slouch at defence, as he managed to bring an arm up in time to block the spinning kick.

"Que--" was all Maria managed to say before Daisuke's arm came whistling in, cracking her across the chin. A loud gasp escaped her lips, and she went stumbling away from Daisuke, clutching her jaw, as, in the background, the bell rung, signalling the official start to this already very brutal match...
_________________
UNDERDOG'S KENNEL:

Upon seeing his opponent second attempted at trying to hit him Daisuke wasn't so merciful this time as after blocking her kick aiming  his head, the black haired man cracked her chin with a right hook! Then the ref would signaled for the bell and officially starting the match!

As soon as he heard the bell Daisuke rushed the luchadora who was clutching her jaw from Daisuke's blow and unleashed a flurry of even more hard shots at her!
_________________
Double T

Maria staggered back from the uppercut, clutching her hurting jaw and swearing in Spanish. She swore, she would make this asshole suffer for that-- and as this match had just begun, she would have plenty of time to do just that, she thought to herself. Daisuke had just made her lose face at the start of this bout, and she wasn't about to forgive him for that.

As Daisuke came rushing at her, fists whirling, she sprang into action. Spinning to the side, she snapped a kick up, aiming to hammer a boot into the side of his head as she evaded his initial rush! Daisuke might have gotten a lucky hit on her, but that didn't mean she was helpless.
_________________
UNDERDOG'S KENNEL: