Search
Latest topics
» Antoinette Francine vs James Elfron - Reach For The Stars
by Leon564 Today at 4:02 am

» The Tigress Debuts!
by MacbookAir Yesterday at 9:41 pm

» A clown and a wrestler walk into a ring: Dave Blake vs Sandía
by SleeperAgent94 Yesterday at 4:56 pm 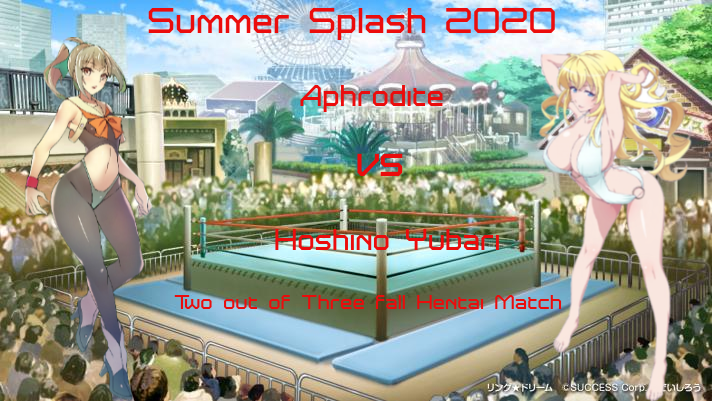 Aphrodite couldn't believe that somehow she was going to be fighting Yubari again for a second time in row, and not only in a hentai match again but also at a major paperview for a dark match. That was where she was truly mad at. Cast out into a prematch show, not even televised. This was a slight against here character that even with aide of her manager she was not able to stop. She was a main eventer, a darling of the crowd in her mind, a goddess after all and even if she wasn't going to be center stage, she was going to steal the spotlight and destroy Yubari for daring being there.

Her entrance was going to be something else as she crouched down low in the dim dark as she kept her balance. They had rigged some sort of controller up to move it around like a remote control boat, a bubble machine hiding the machinery as it crept forward in the water slowly making its way to the sandy beach where the ring and crowd was. It would beach and the shell would open up to reveal Aphrodite in all her glory, stretching out her arms, dressed in the see through silks and near barely there bikini that she typically wore as her outfit for wrestling.

She was ready, slowly walking around the ring sauntering around with arms raised out . Aphrodite didn't even enter the ring, instead flirting with a rather attractive audience member, chatting them up.
_________________
-Moonlit Roster
-La Avispa Negra II
-Aphrodite: The Love of the World (Formerly Aisha Love)
-Ragna the Crushing Beast
-Ninja Kitsune Yori Takibi
-Grizzly Yamamoto

A second chance, that's what Hoshino asked for when her manager asked if she wanted to face Aphrodite again. To say she had her misgivings would be an understatement, as the last time she met the blonde goddess she had been stripped naked and humiliated into submission. But that was because she botched her high risk high flying finisher, not because Aphrodite had actually beaten her. In her mind, if she had landed that move, everything would have gone her way.

The slim gymnast was dressed for the beach, having been told it was the standard for these kinds of matches. Her green bikini had cute frills on it, making her look more childish than she would have liked, but it was one of the few bikinis she had and the only one she was willing to part with. She knew that by the end of this match, there was a very good chance she wouldn't be getting it back. 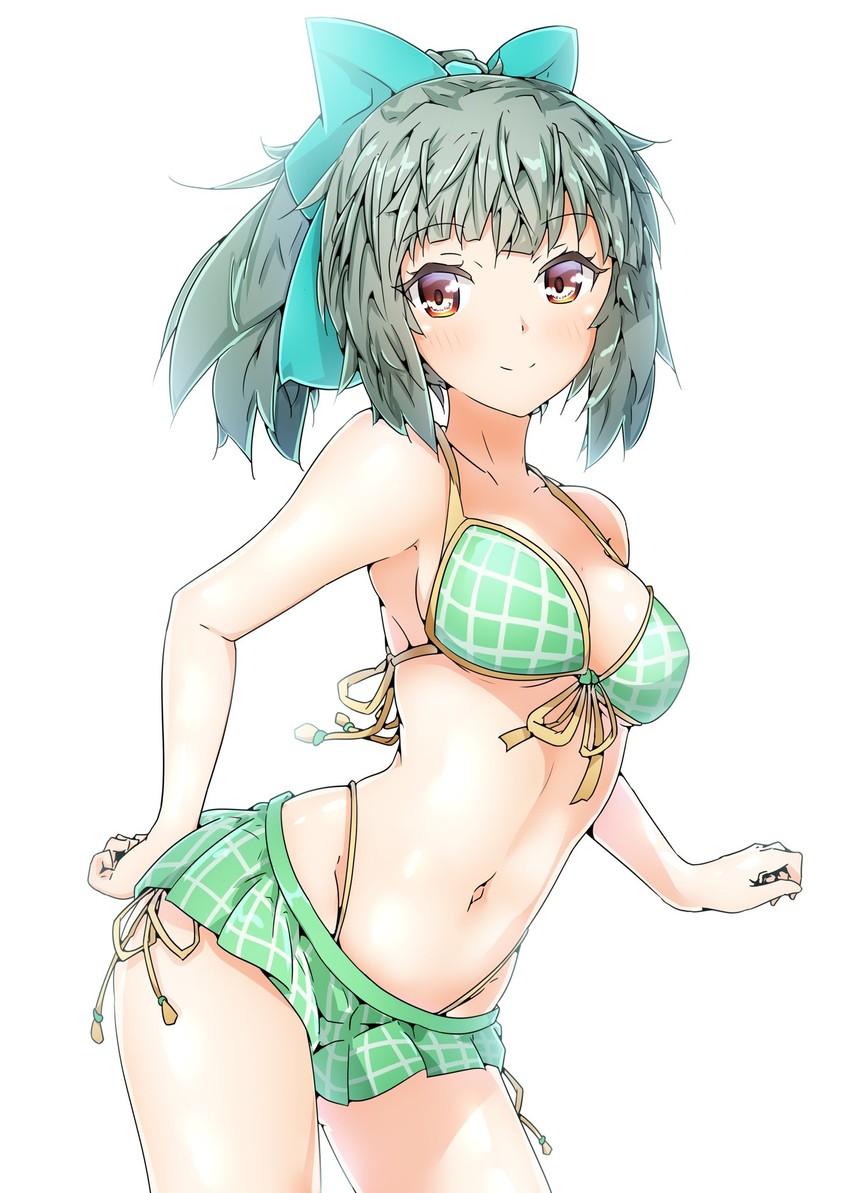 Upon her arrival, she saw that the ring was empty. For a moment she thought Aphrodite had not yet arrived, then she noticed a bit of blonde hair bobbing on the far side of the ring, the rest of the person blocked by the ring apron. Hoshino scowled, walking around the ring to confront her opponent directly. She saw Aphrodite busy flirting with some of the men in the crowd, which just incensed her even more.

Hadn't noticed that Hoshino was standing behind her as she talked away with a fan in the crowd that when it came to her insulting her person she was rather surprised. The voice was familiar, she had made it beg for mercy a month or two earlier in submission, "O' it is you," she says simply pushing with a full palm to the chest the prospective male and roughly pushing him away as she turned herself while leaning on the  guard rails, "Watch your tongue. You are in the presence of a goddess after all and such terrible words are an insult that I will not let stand."

Ever full of her own superiority and smugness that she seemed to disregard Hoshino as more a nuisance, something that was just simply in the way and had to be pushed aside, "Just had to come back at me again, wanted another try, or could you just not get enough of me after how I left you, mewling on the ground, practically a wreck."
_________________
-Moonlit Roster
-La Avispa Negra II
-Aphrodite: The Love of the World (Formerly Aisha Love)
-Ragna the Crushing Beast
-Ninja Kitsune Yori Takibi
-Grizzly Yamamoto

Aphrodite's words just incensed Hoshino even more, the reminder of what happened during their last match making the schoolgirl blush bright red. Still, she wasn't about to let Aphrodite get into her head any more! Hoshino walked right up to her opponent, sticking out her finger and poking Aphrodite in her bountiful and quite exposed chest.

"I'll say whatever I want to you, slut goddess," she snapped back, "You only won because I fucked up, not because you're any good. This time I'll beat the snot out of you and make you show just how much of a slut you really are!"

The schoolgirl was ready to start fighting Aphrodite right then and there, barely holding herself back. "Get in the ring," she said, waiting for Aphrodite to move first before she turned around, not wanting to take one of the goddess's cheap shots.
_________________
The Party!

Aphrodite seemed to get the message as her face changed shape from one of noncaring assuredness to one of anger and contempt as it was clear Hoshino was not to be trifled with and did not seem to be at all afraid as she stood against her in a rather brave fashion, a stand of sorts that impressed the so called goddess one could say, "You little bitch!"

The goddess did exactly as thought and retaliated, throwing out her hand in a rather mean slap that if contacted could echo across the beach and the gathered crowd if it landed. Aphrodite was out for blood now and her recklessness was showing.
_________________
-Moonlit Roster
-La Avispa Negra II
-Aphrodite: The Love of the World (Formerly Aisha Love)
-Ragna the Crushing Beast
-Ninja Kitsune Yori Takibi
-Grizzly Yamamoto

It was a good thing that Hoshino kept her guard up. Even so, she didn't expect Aphrodite to attack her right then and there. The blonde's powerful slap snapped the unprepared schoolgirl's head to the side, nearly knocking her off balance. Hoshino felt painful heat radiating from her red cheek, her eyes watering a little from the hit and her ears ringing. There was some serious anger behind that hit, more than what Hoshino's words could have triggered.

But the gymnast was just as furious. Directing all her anger at Aphrodite, Hoshino quickly responded to the attack. She straightened up, then without any warning spun around and threw a super kick upwards right at Aphrodite's chest! There was no bell, and neither girl had even gotten into the wrestling ring, but that didn't matter as the fight was on!
_________________
The Party!

The slap rang out, hand impacting right across Hoshino's face as Aphrodite stood before her, now standing up right with a smirk on her face. Her confidence in scaring away her opponent was shattered after Hoshino seemed to regain her balance quickly after being hit, and suddenly straight in for a super kick that impacted right into her buxom chest, jostling them around as the blonde goddess fell back against the railing, near knocking it over.

She wasn't expecting at all for Hoshino to come out and cock her like that in response. Hoshino was determined in this match, something that worried her somewhat as the bell rang to start it off proper now that the two of them seemed to already be fighting. Aphrodite being knocked down already and staring up at Hoshino with a wince.
_________________
-Moonlit Roster
-La Avispa Negra II
-Aphrodite: The Love of the World (Formerly Aisha Love)
-Ragna the Crushing Beast
-Ninja Kitsune Yori Takibi
-Grizzly Yamamoto

That kick was incredibly satisfying to the smaller gymnast, who had been nursing a grudge ever since losing to Aphrodite. Hoshino despised everything about her opponent, from her mean and dismissive attitude to the lewdness of her body. The schoolgirl wanted so badly to out Aphrodite in her place she didn't even care if they were in the ring. Luckily for her, the blonde struck first. Now she was justified in whatever she did outside the ring.

So Hoshino immediately moved in to follow up. Her hands grabbed at Aphrodite's hair, aiming to pull the blonde up to her knees before she could properly recover. She needed to keep the pressure up, that worked very well for Hoshino during their last match, and she was sure it would work well here too.

"Take this!" Hoshino yelled, lifting Aphrodite up to her knees before throwing her head at the steel railings that held the crowd back. She wanted to hear the impact of Aphrodite's skull against the hard metal, hoping that would hurt and stun the blonde goddess, giving Hoshino even more time to properly punish her.
_________________
The Party!

Aphrodite put a hand to her chest where she had been kicked, having been stunned a good bit after falling against the barrier, hitting the back of her head against it. This wasn't the best way of starting the match out right, especially after having an entrance like she had, a humiliating look for a supposed goddess just like herself. She would look worse off as she was grabbed by her blonde hair, a more humiliating look from someone that she had capably defeated only awhile back.